London, United Kingdom – Over the past few weeks I have felt that my two national identities were out of sync.

On the one hand, daily life in London went on as usual, the coronavirus outbreak mainly relegated to news bulletins and a few conversations. A concern, sure, but nothing that was likely to affect my fellow Londoners beyond the odd cancelled holiday.

All the while, however, the reports and social media feeds I was getting from Italy told a very different story. The lives of my family and friends were being turned upside down by the COVID-19 outbreak that hit my native Italy more than any other country outside of China. At first it was worrying, then shocking. From a distance, it took a while to realise that what I felt was fear. Now that fear has reached the United Kingdom.

In London, the country’s coronavirus hotspot with a third of total recorded deaths, mortuaries are now being expanded. It may not be enough. In the northern Italian city of Bergamo, one of the worst hit by the virus, army vehicles are having to take bodies to nearby provinces as the city’s crematorium is no longer able to cope. If Italy has been a few weeks ahead in this crisis, what can the UK learn from the Italian case that will avoid similar chilling images here? 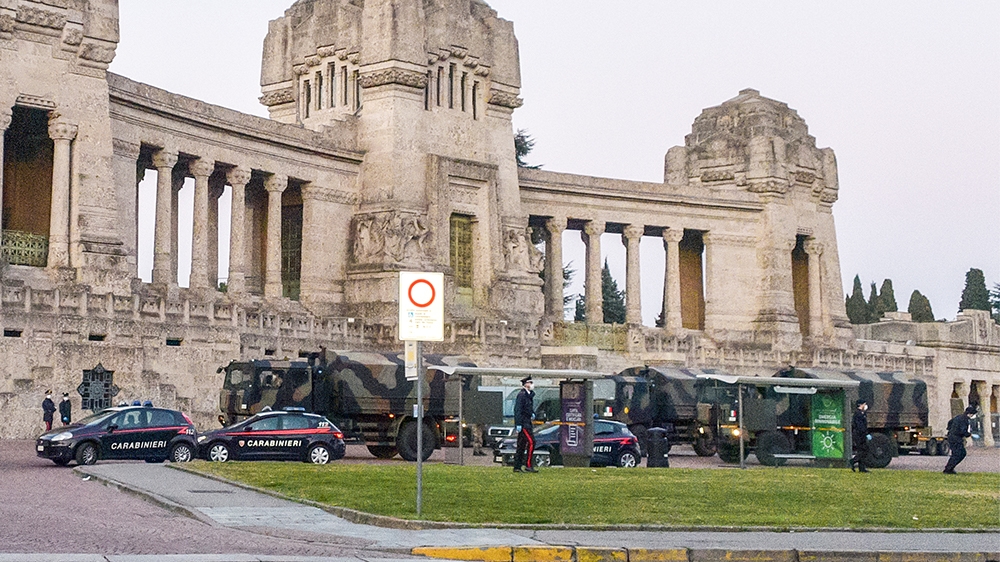 The coronavirus officially hit Italy in mid-February, when the first patient known to be infected within the country was diagnosed. Since then, Italy has been introducing increasingly restrictive measures to try to contain the exponential spread of the disease. The rest of the world, especially its European neighbours, watched aghast as the rate of contagion and deaths rose. The measures Italy took often seemed as shocking as the contagion itself.

First came the lockdown and quarantine of the so-called “Red Zone” around the northern towns affected. Dozens of roadblocks staffed by police, with residents only allowed to leave their homes to get necessities such as food and medicine. It was meant to last two weeks, but on March 8 the quarantine was extended to the whole of the Lombardy region and other provinces, including Milan, Italy’s financial heart.

Less than 48 hours later, the quarantine was extended again, this time to the whole of Italy. A country of 60 million people was on lockdown. This was not China; Italy is a liberal Western democracy and people were suddenly not allowed to leave their homes without a valid reason. 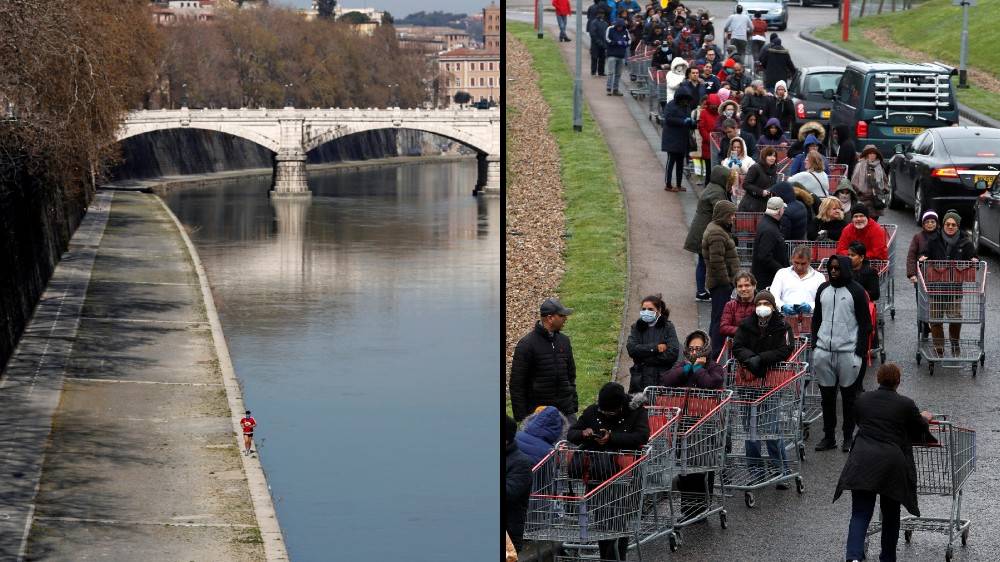 A tale of two cities: The Tiber River running through central Rome on March 18, and a queue outside a Costco store in Watford, outside London, on March 19 [Composite/Reuters]

It seemed unreal. And for those without direct links to Italy, it remained unreal for many weeks. The question that kept coming up was: “Why Italy?” There is still no clear answer to that. Had the country just been unlucky? Was its ageing population the reason for the high death toll? Are the Italians’ more tactile ways of greeting behind the increasing rate of contagion? And the scariest question of all: “Could it happen here?”

Little by little, that final question at least has been answered. Yes, it could happen here. It is happening here. The rate of COVID-19 contagion and deaths is growing exponentially. It is no longer just about hand-washing and vague advice about social distancing.

All schools will close from Friday. Large-scale events have been cancelled. Although churches were still celebrating mass last Sunday, as Pope Francis was pictured walking through an eerily deserted Rome, no public gatherings in churches will happen after Friday evening.

Supermarket shelves are emptying. In Italy there was a run on pasta, in the UK it is toilet paper. Hand sanitisers are like gold dust. Most social gatherings – even small parties organised by the obstinate few who took the second world war morale-boosting message “Keep Calm and Carry On” to mean “Bury Your Head In The Sand” – have been cancelled.

The elderly and vulnerable are in self-isolation for months. But the most important similarity between the UK now and Italy a few weeks ago is that now the British are scared too.

In Italy, the move to national lockdown was gradual, and it may well be the UK’s next step.

When Lombardy was locked down on March 8, Italy had more than 5,800 confirmed cases of COVID-19 and 233 deaths. As the UK announced school closures on March 18, it counted 2,626 positive COVID-19 tests and a total death toll of 104. Both had recently seen strong exponential growth in both contagion and deaths.

On Wednesday, Italy registered the highest death toll in one day, a staggering 475 deaths. Not even China had recorded such a high number of single-day deaths. Does that mean the Italian strategy is not working? It certainly means that we are not yet seeing the peak of the contagion and mortality curve. Even Lombardy, the hardest-hit area where the lockdown was first imposed, is still seeing a growing number of contagions and deaths.

But there is some hope. The province of Lodi, which includes the town of Codogno where Italy’s first COVID-19 case was found, has seen a sharp drop in new cases of the virus. In contrast, nearby Bergamo is recording nearly three times as many infections as Lodi. One reason may be that Lodi imposed a total lockdown two weeks before Bergamo did. In the fight against coronavirus, timing is key.

Prime Minister Boris Johnson may want to look at the Lodi case and the shocking pictures of army vehicles taking dozens of dead out of Bergamo, as he decides if and when to impose a lockdown in the UK.