Manila, Philippines – Coronavirus has hit Philippine prisons, notorious as the world’s most crowded, heightening fears that jails will emerge as the epicentre of the virus in the Southeast Asian nation.

More than 300 COVID-19 cases have been confirmed among those behind bars, most in the detention facilities in Cebu, southern Philippines. At least four detainees have already died from the virus while dozens of people working in prisons have also tested positive for the virus.

On Saturday, Associate Supreme Court Associate Justice Mario Victor Leonen told the media that about 10,000 inmates would be released in an attempt to stop the spread of COVID-19 in the country’s detention facilities. The detainees were released following a directive issued by the Supreme Court to release those who were being held ahead of trial because they could not afford bail, as well as certain elderly and ailing prisoners and those whose sentence was six months or below.

The Philippines has the highest jail occupancy in the world.

A brutal crackdown on illegal narcotics starting from the middle of 2016 has added to the problem with more than 220,000 arrested.

Thousands more have been temporarily held since March for violating quarantine protocols meant to curb the spread of COVID-19.

According to the Bureau of Jail Management and Penology (BJMP), the prison congestion rate is 534 percent. Global data shows that there are 215,000 people held in facilities meant to house about 41,000. About three-quarters of them are being held awaiting trial.

On March 20, the BJMP instituted a total lockdown across its more than 400 facilities in a move to prevent the spread of infections.

“We’re just waiting to die here. I feel helpless – like we’re waiting for the virus to come for us,” a 61-year-old detainee told Al Jazeera over the phone. In the background, another inmate could be heard coughing.

The 61-year-old, who spoke on condition his name and place of detention were not revealed, had been transferred to another room because of his age, and the series of fevers and colds that he has been suffering since he was arrested at the start of the year.

The cell, meant for two, is occupied by 11 people, but it is better than what they are used to. “It’s better than sleeping on the stairs, piled up on top of one another,” he said. With prison visits suspended, the man’s mobile phone is the only way he can communicate with his daughter outside.

Face masks have been distributed to all detainees, but many say it is uncomfortable to wear them in the sweltering summer heat and in spaces that are so cramped that it is impossible to walk two steps without bumping into someone else.

Even before COVID-19, authorities estimated that 5,000 people died each year in the Philippines’s main national penitentiary, known as Bilibid, mostly due to the poor health conditions there.

Poor ventilation, inadequate sanitation and the low quality of food, compounded by overcrowding, contribute to the spread of infectious diseases in jails, experts say.

Last week, Human Rights Watch (HRW), raised concerns that COVID-19 was spreading more quickly in detention facilities and that prison deaths were not being fully reported.

Inmates told HRW in the Cavite Provincial Jail, south of Manila, four prisoners who serve as medical assistants had carried the corpse of a Nigerian man in his 40s out of the jail with little protective medical equipment. The man was later found to have had COVID-19. 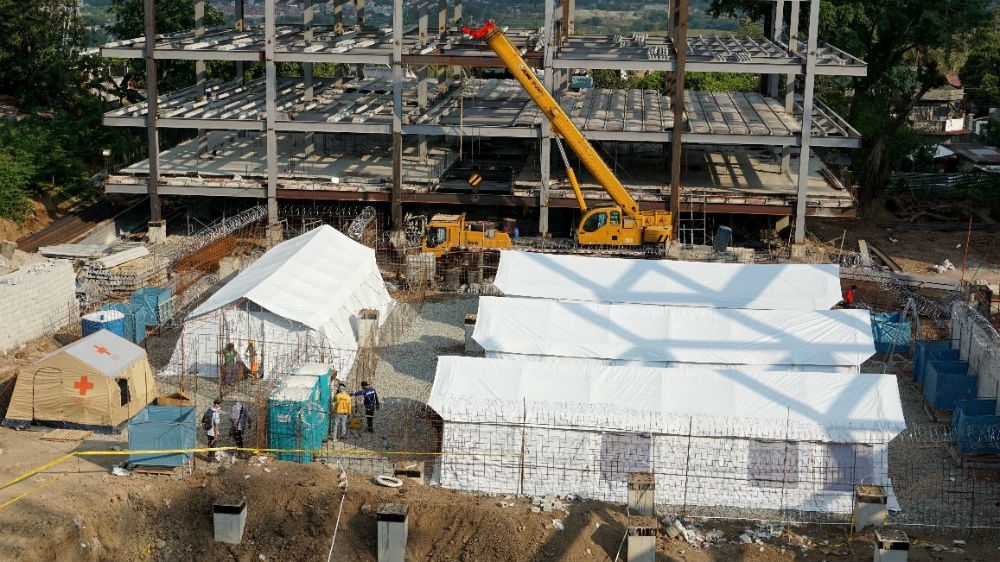 Solda also said the claim that deaths were not being reported is unlikely since authorities are mandated to inform relatives if an inmate has died. “Nonetheless, we will not take this claim lightly and will further investigate.”

“Rather than issuing denials and retorts, prison authorities should just release information about suspicious deaths of persons in their custody,” said Phil Robertson, HRW deputy director for Asia.

Similarly, knowing the exact extent of transmission in incarceration facilities is made difficult by a low level of testing, a delay in the release of test results and the posthumous diagnosis of suspected COVID-19 patients.

The health department has come under intense scrutiny for its reluctance to implement mass testing. Bowing to public pressure after leaked documents showed that politicians were jumping the line to get themselves and family members tested, the government started an expanded testing programme and is aiming to test about 8,000 people a day.

The health department said it is working with prison authorities to implement “targeted testing” in jails.

The International Committee of the Red Cross (ICRC) has set up quarantine facilities in selected prisons to isolate detainees with COVID-19 symptoms. Currently, the isolation areas can hold about 500 patients, and the ICRC is working with authorities to construct more.

“The summer months will bring with it seasonal diseases like skin infections, diarrhoea and the flu, which may further exacerbate the problem,” said Harry Tubangi, Health in Detention programme manager for the ICRC.

Other countries like Myanmar and Indonesia have already temporarily released prisoners to protect against the spread of the virus. Last month, Iran freed about 85,000 prisoners.

In the Philippines, the petition for the release of some detainees has been met with resistance.

“Congestion in prison facilities is not among the grounds to release inmates,” Solicitor General Jose Calida said last month.

Fides Lim, spokeswoman for KAPATID (Families and Friends of Political Prisoners), has been campaigning for the release of low-level offenders and political prisoners like her husband, 71-year-old Vincent Ladlad.

Lim claims her husband’s arrest in 2018 was based on politically-motivated charges brought by his involvement in peace negotiations with leftists groups.

“Prisons are a ticking time bomb for COVID-19. Now we are seeing it explode little by little,” she said.

On April 15, the Supreme Court ordered the expedited release of prisoners qualified for parole and executive clemency.

Department of Justice Under-secretary Markk Parete told Al Jazeera an estimated 200 applications are currently being processed and may be decided within the coming days. Those approved will have to first be quarantined for two weeks before they are released. 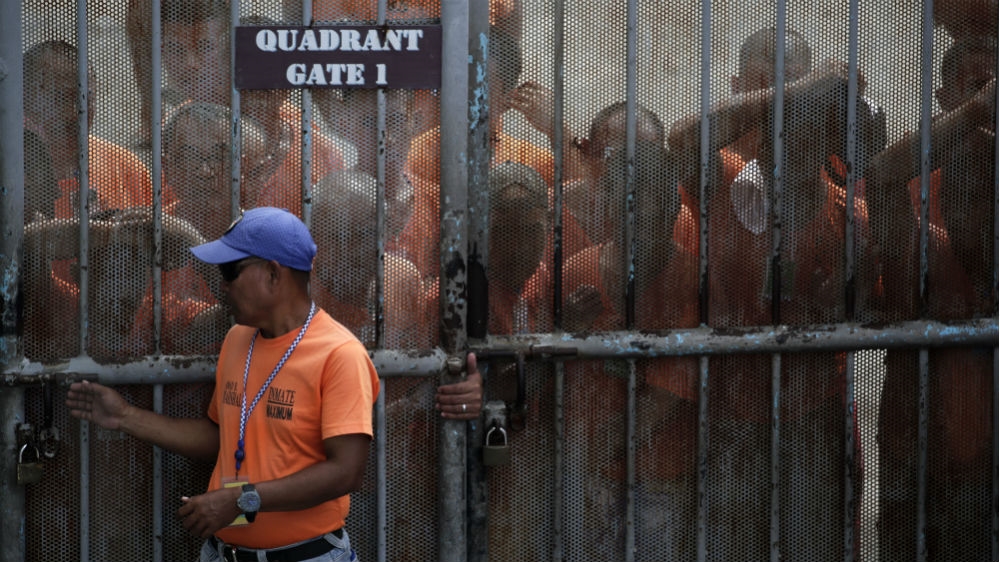 Even before the arrival of COVID-19, authorities had reported thousands of deaths at Bilibid, the national penitentiary, blamed on overcrowding, poor diet and a lack of hygiene [File: Francis R Malasig/EPA]

Arlene Perez hopes that her daughter, Ge-Ann, will be among those released soon. Ge-Ann, 26, has leprosy and has been in custody since last year.

“She needs alcohol, soap and her medicine. I don’t know how she is getting that now,” said Perez, who last spoke to her daughter on March 8.

Countries around the world are fumbling with a way to control the rate of COVID-19 infections amid limited resources and stretched healthcare systems have resorted to a social triage – a ranking of people to be given medical attention.

Even those well-prepared have missed some communities.

In Singapore, migrant workers living in dormitories were overlooked and after months of being lauded as a model for effective handling of COVID-19, Singapore now has the highest number of infections in Southeast Asia, mostly among migrant workers.

In the Philippines, Duterte has justified his notoriously bloody law enforcement policies by saying criminals “deserve to die”.

“After waves of rhetoric from President Duterte calling drug users as less than human, it’s not surprising the government is treating them so poorly. It’s outrageous and unacceptable that the government views them as expendable persons,” said HRW’s Robertson.

Raymund Narag, professor of criminology and criminal justice at the Southern Illinois University, is an expert on Philippine jails as a scholar and former detainee. Narag was proven innocent and later released after spending nearly seven years behind bars.

“The only way to control the infection is to de-congest the jails by releasing prisoners,” said Narag.

It remains unclear whether the 10,000 released at the weekend have been tested. The health department had not responded to Al Jazeera’s inquiry by the time of publication.

While Narag lauds some measures that have been taken, such as preventing jail personnel from going home to their families which might risk exposure to the disease, he notes that even the most well-guarded prison is not impenetrable to the virus.

“If prisoners are not released, jails will become the epicentre of the virus in the country,” Narag said.