The deaths of healthcare workers from the coronavirus are inevitable. That is how Nurse Sean Petty says he believes hospital and government leaders across the United States sees it.

“That makes us feel like our lives are expendable and we know that they are not,” says Petty, who works in the pediatric emergency room at Jacobi Hospital in the Bronx, New York.

Petty and dozens of his fellow nurses protested outside the hospital earlier this week, pleading for more personal protective equipment (PPE) like masks, gloves and gowns.

Their demands have been echoed across the US, where health workers continue to grapple with the critical PPE shortages as the COVID-19 coronavirus hits towns, cities and states nationwide. More than 250,000 people have been infected with the virus in the US, with more than 5,000 deaths. 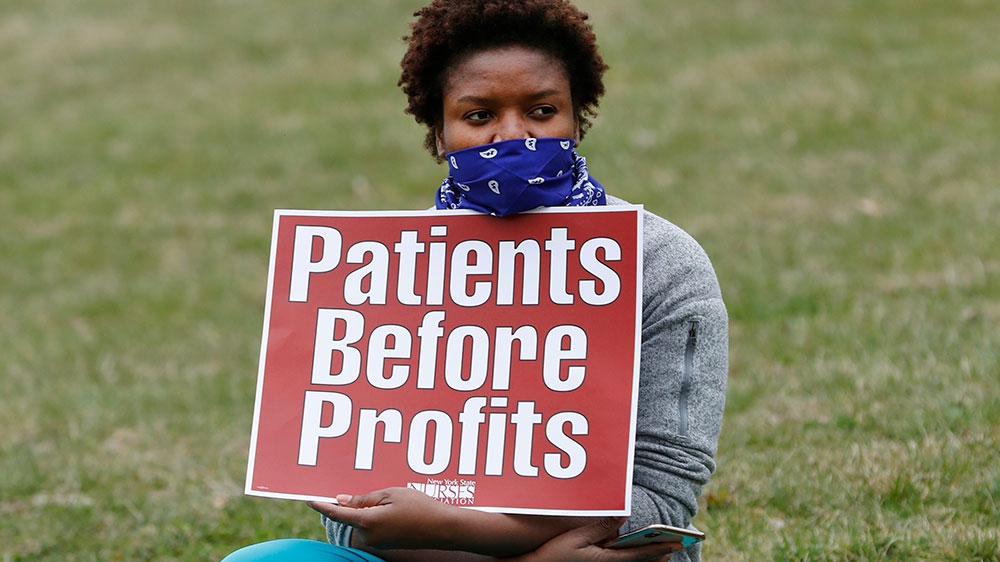 Petty says that he and his fellow nurses are constantly exposed to the virus without enough PPE to protect themselves. His hospital lost a nurse, 50-year-old Freda Ocran, last week to COVID-19, the second nurse in New York to die from the virus. Two more nurses are currently being intubated at his hospital, according to Petty.

“We can’t help but think that being healthcare workers and not having what they had in other places, like what the PPE is like in China and South Korea … they’re just worlds apart,” Petty says. 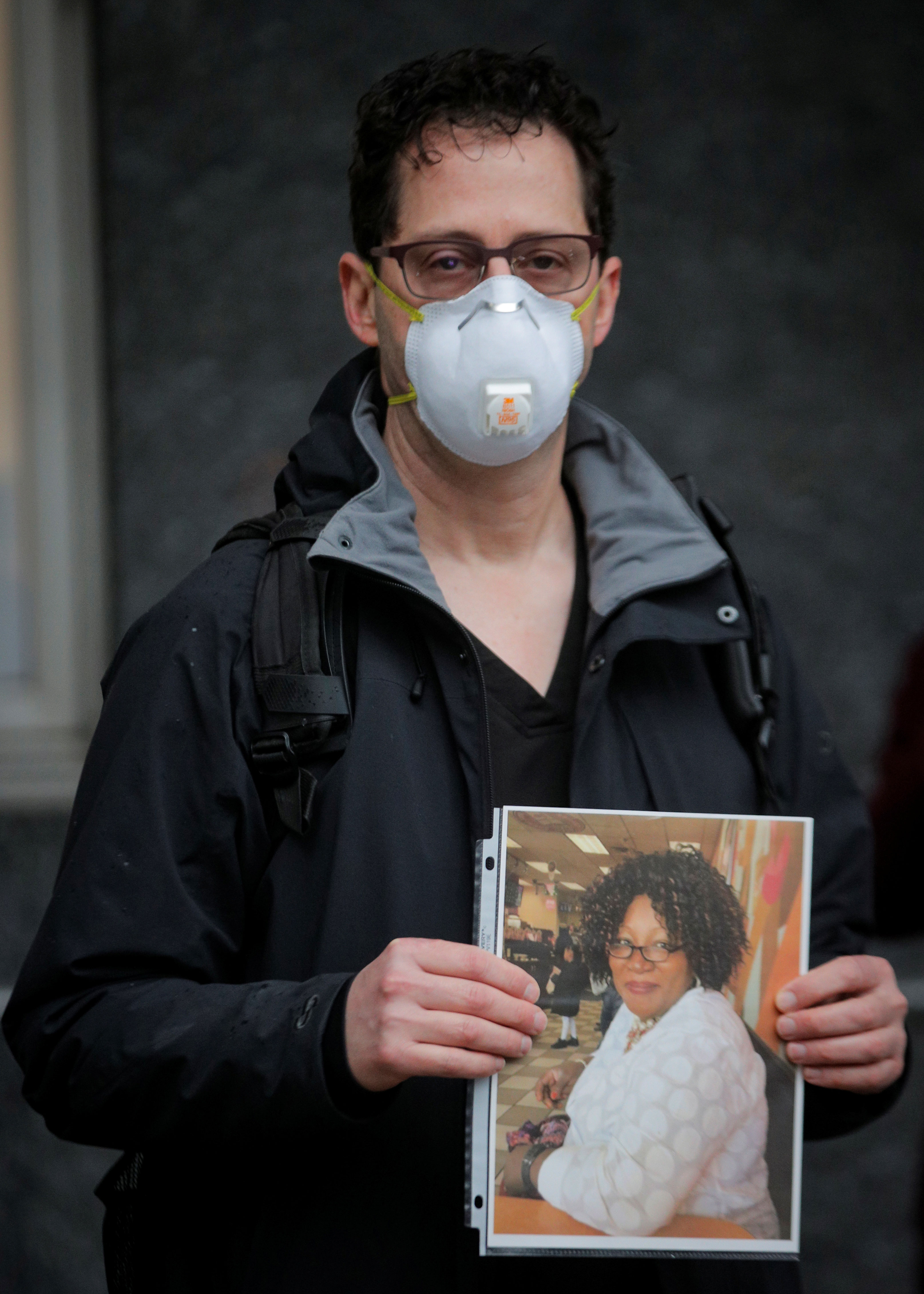 Before Petty’s 12-hour shift begins, he reports to the new command centre set up outside his hospital to receive a packet containing a regular surgical mask, some paper scrubs and a light gown. Sometimes he gets a face mask. He also receives a new N95 mask for every shift and is expected to use the same one throughout the day.

Responding to the concerns of the nurses, NYC Health + Hospitals, which operates public hospitals and clinics in the city, said in a statement that the nurses’ safety is top priority.

“We currently have the supplies needed for all of our staff, but are fully cognizant that there is a nationwide shortage of supplies,” the statement said. “Because of the national picture, we have taken serious measures to conserve what we do have. However, every healthcare worker in our system who needs PPE is able to receive what they need.”

When healthcare workers are sick, it not only puts a strain on the individual hospitals, but also the entire system.

Dr Calvin Sun is an independent emergency medicine doctor who works in about a dozen hospital emergency rooms across New York City. In the last 21 days, he’s worked 18 shifts. On some days, he sees up to 41 patients.

“I’m heeding a calling to cover the hole that’s been created by my colleagues, my friends, who were all calling in sick or are being hospitalised by being exposed to this virus,” says Sun, who recently had to intubate a nurse he knew after she contracted the virus. That nurse later died.

Sun says emergency rooms are overcrowded with COVID-19 patients with nowhere to go.

“They’re all languishing in the hallways, stretchers lined up like [the video game] Tetris in this giant emergency room where you really can’t get from patient to patient,” he says. “You walk through a packed waiting room of people not maintaining the six-foot social distancing separation rules because the waiting room is small and all 30, 40 people are packed like sardines, coughing on each other, spreading COVID-19 even further.”

Sun cobbled together his own PPE gleaned from his personal stockpile and other emergency rooms he’s had access to over the last few weeks. He keeps his face mask in his backpack and brings it to wherever his work takes him.

“You’re only as strong as your weakest link in terms of your protection,” he says about the importance of having a complete set of PPE, which include a surgical gown, gloves, eye protection or face shield, N95 mask or other type of respirator mask and hair and ear covering. However, Sun says on top of this, he and other health workers should ideally have a powered air-purifying respirator and Tyvek hazmat suit.

In neighbouring Suffolk County, Long Island, a nurse says her hospital ran out of PPE about a week ago.

“Now it’s just been completely a whole different world and everything that we were taught as far as PPE and infection control, everything has gone out of the window,” says the 35-year-old nurse, who wishes to remain anonymous because she is not authorised to speak on hospital conditions. 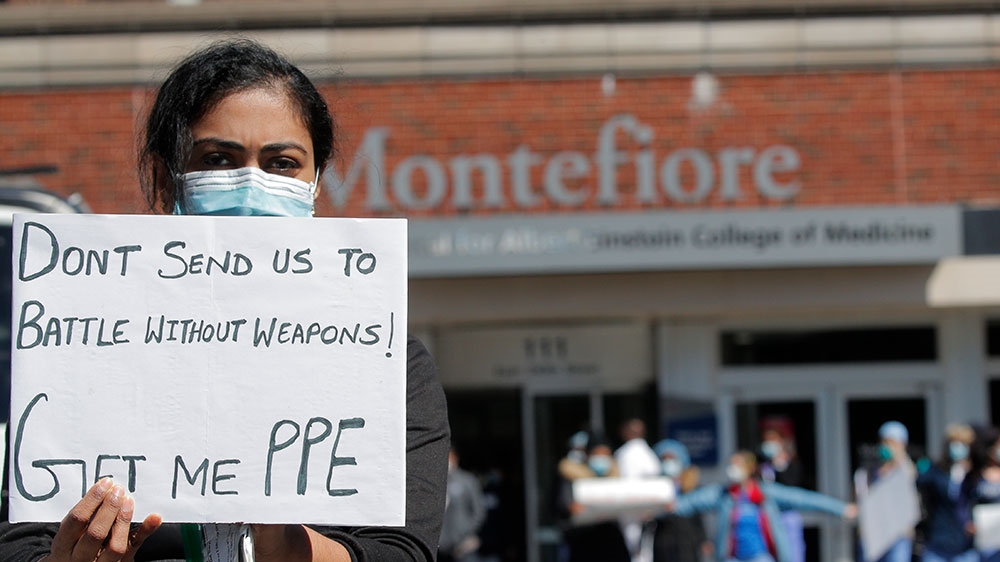 She says she received one N95 mask two weeks ago, which she keeps in a paper bag at her hospital after the end of each shift.

Not just in New York

Elsewhere in the country, doctors and nurses are preparing for the onslaught of COVID-19 cases to hit their hospitals in the coming weeks.

Dr Susan George Knoche is a colorectal surgery specialist in Charleston, South Carolina, and has joined forces with other doctors, nurses and administrators at her hospital to start planning for possible PPE shortages and strategising how to best conserve what they have in stock. They have already ceased elective surgeries as one of the protective measures to conserve their limited PPE.

“We are so worried about the coming wave of COVID-19 that we have to sort of shut down operations as much as we can in preparation for it,” she says. “It’s like we’re sort of waiting standing there, like waiting with the doors open for the COVID-19 patients to start coming in,” Knoche adds. 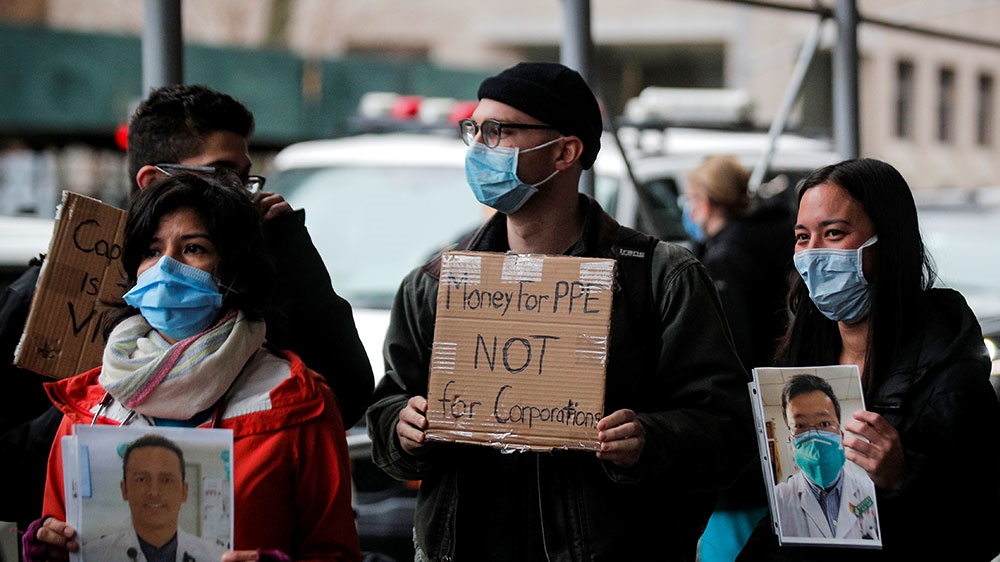 Some doctors – like family practitioner Dr Sylvia Gisi in Temecula, California, who recently began testing her patients for the virus – say they have to go “underground” to get masks and goggles for her clinic, but the supplies are hard to find.

“This is the United States of America, this is not a third-world country, and yet the doctors and nurses and ancillary hospital staff are being treated like that,” she says about the lack of access to PPE.

The federal government’s emergency stockpile of PPE is nearly depleted, officials acknowledged this week. US media also reported that the US exported millions of dollars of PPE to China during the first two months of the year, despite expert warnings the coronavirus would soon spread to the US.

Even though the $2.2 trillion coronavirus stimulus package passed by Congress last month includes $117bn in aid for hospitals, doctors and nurses across the country still worry about their health systems collapsing.

“I’m afraid of that moment where we go from an incremental growth to a significant jump in volume in ill patients that we’re going to drown, and it’s going to be bad,” says Petty, the New York City nurse.