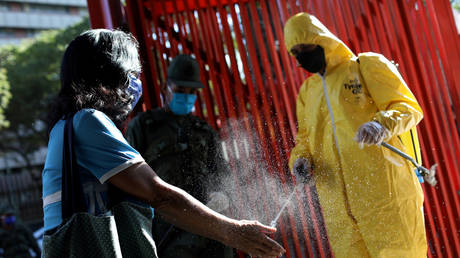 Amid crushing US sanctions and IMF rejection already making Venezuela’s struggle with Covid-19 difficult, Twitter now seems to have hobbled the country’s vice-president and head of its coronavirus response, Delcy Rodriguez.

Both the personal and the official Twitter account belonging to Rodriguez were “temporarily restricted” on Thursday over “unusual activity,” with old tweets still visible to those who chose to view them, but no new tweets available after Wednesday.

Foreign Minister Jorge Arreaza called it an “inhumane and reckless” gesture by Twitter, as Rodriguez leads the presidential commission handling the country’s coronavirus response, and this was depriving the Venezuelan people of the information necessary to handle the pandemic.

The US government thought police at Twitter have censored Venezuelan government officials yet again, for the umpteenth timeNow it’s restricting the accounts of the vice president and her officeShe is currently directing the campaign against coronavirushttps://t.co/aXda86LjHa

Earlier this week, Twitter expanded its definition of “harm” so it could censor content on the platform that “goes directly against guidance from authoritative sources of global and local public health information.”

While it is possible that the muzzling of Rodriguez is unrelated, it comes amid the aggressive US campaign to use the Covid-19 pandemic to further sanction countries that have defied Washington’s diktats in the past – notably Venezuela and Iran, both targeted for regime change.

One US State Department official was quoted earlier this month describing the campaign against the government of Nicolas Maduro as “maximum pressure March.”

While Venezuela copes with #coronavirus, the US has ramped up lethal sanctions that have devastated the country’s healthcare sector & drove up the cost of tests. In a decent world, the architects of US sanctions would be prosecuted & jailed indefinitely. https://t.co/kQidaHxnqc

Washington has been fully invested in overthrowing Maduro since January 2019, when it recognized opposition politician Juan Guaido as Venezuela’s “interim president.” A number of US allies also recognized Guaido, but he has been unable to gain any traction inside Venezuela itself.

Yet on Tuesday, the International Monetary Fund cited lack of “clarity on recognition” to deny Maduro’s plea for an emergency $5 billion loan to help tackle the coronavirus crisis. The IMF is “not in a position to consider” Venezuela’s request, President Kristalina Georgieva wrote back to Caracas.

The US has also gone after Iran, sanctioning a number of companies and individuals on Wednesday for oil trade that provides “revenue to the regime that it may use to fund terror and other destabilizing activities.”

Iran is just behind Italy and China in the total number of Covid-19 cases and deaths, reporting 18,407 and 1,284 respectively as of Thursday afternoon. The country’s medical system, already starved by years of US sanctions, has struggled to keep up with the influx of patients. The government in Tehran has appealed to the US for sanctions relief, to no avail. Maduro’s pleas to the White House to ease sanctions during the pandemic have likewise gone unanswered.

Interestingly, Rodriguez’s English-language account was still fully functional as of Thursday evening, suggesting that Twitter doesn’t mind her tweeting – so long as she doesn’t do it in a language Venezuelans needing information about the contagion might understand.