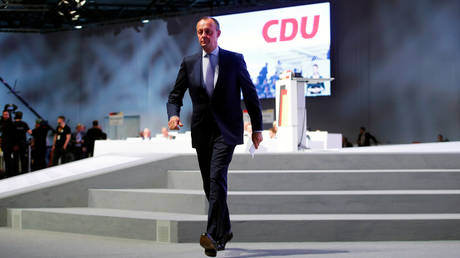 Friedrich Merz, a former Christian Democratic faction leader in the Bundestag, who is now seen as the most likely successor to Chancellor Angela Merkel, has revealed he has tested positive for coronavirus.

Merz has emerged as a grassroots favorite in the race for the top post in Merkel’s Christian Democratic Union (CDU), and was considered one of the frontrunners. This came after the chancellor’s protege, Annegret Kramp-Karrenbauer, abruptly resigned following a political scandal in the eastern region of Thuringia.

However, the 64-year-old now faces a fight for more than just his political career. “My Sunday coronavirus test is positive,” the politician told the German dpa news agency, adding that he would stay in quarantine at home at least till the end of next week.

Earlier this week, Merz was eager to show that even the coronavirus epidemic could not make him lose his way, as he appointed the party head campaign chief. The move sparked an angry reaction from the outgoing CDU leader, Kramp-Karrenbauer, known in Germany as AKK. “First the country, then the party and then the person,” she said, implying that Merz and his rival Norbert Roettgen put too much effort into their personal success at a time when the nation is fighting the deadly virus outbreak that has claimed 17 lives and infected more than 7,600 nationwide.

Germany has been one of the European nations most affected by the deadly disease that originated in China several months ago.