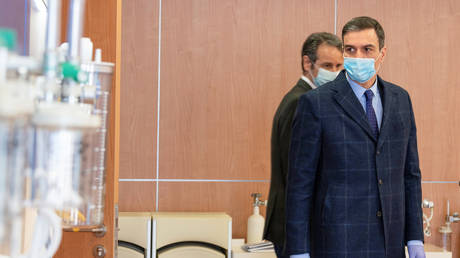 As Spain becomes Europe’s most infected country, Prime Minister Pedro Sanchez has sent a forceful message to Brussels, warning that the European Union will fail if it gets its handling of the Covid-19 crisis wrong.

In a piece published in the Guardian on Sunday, the Spanish leader said that the outlook of his “fervently” pro-European government is being tested by the bloc’s handling of the pandemic to date.

Sanchez called for solidarity between member states at this “critical juncture” of the outbreak, saying that the European project risks being “severely damaged.”

He called on the union to go further than the European Central Bank’s new temporary emergency purchase program and the European Commission’s plan for people who have lost their jobs, saying the measures are not enough on their own.

“Europe must build a wartime economy and promote European resistance, reconstruction and recovery. It must start doing so as soon as possible with measures to support the public debt that many states, including Spain, are taking on,” he wrote.

If we continue to think small, we will fail.

The prime minister summoned the ghosts of recessions past, when southern European nations were at the sharp end of measures introduced by Brussels, and blasted the result of this approach.

“The United States responded to the recession of 2008 with a stimulus package, while Europe responded with austerity. We all know the outcome,” he said.

“Today, when we are on the brink of a global economic crisis of an even greater magnitude than that of 2008, the US has implemented the greatest mobilization of public resources in its history.

Is Europe willing to be left behind?

Sanchez called on the 27-member union to create a debt mutualization mechanism to purchase essential medical supplies as a single bloc, establish coordinated cybersecurity strategies, and to create an emergency plan to ensure that the continent can bounce back from the pandemic.

“If the virus does not respect borders, then nor should financing mechanisms,” he wrote.

The Spanish leader finished his comments with a call for solidarity that ensures that there are no gaps between north and south and no EU nation is left behind.

Also on rt.com
Brussels to the rescue? Ursula von der Leyen pushes for Covid-19 ‘Marshall Plan’ as bloc is far from united