US senators pressed Donald Trump’s nominee to be director of national intelligence on Tuesday on whether he would act independently of the president on issues like the origins of the coronavirus in China, as legislators held the first socially distanced hearing during the coronavirus pandemic.

Both Republicans and Democrats at the Senate Intelligence committee’s confirmation hearing wanted to know how Representative John Ratcliffe would manage pressure from Trump, a president who has often been at odds with the intelligence community.

“The intelligence I deliver will not be subject to outside influence,” he said.

Many of the questions for the Republican nominee to head 17 US intelligence agencies centred on coronavirus and China, which Trump has partly blamed for the devastating impact on the United States. 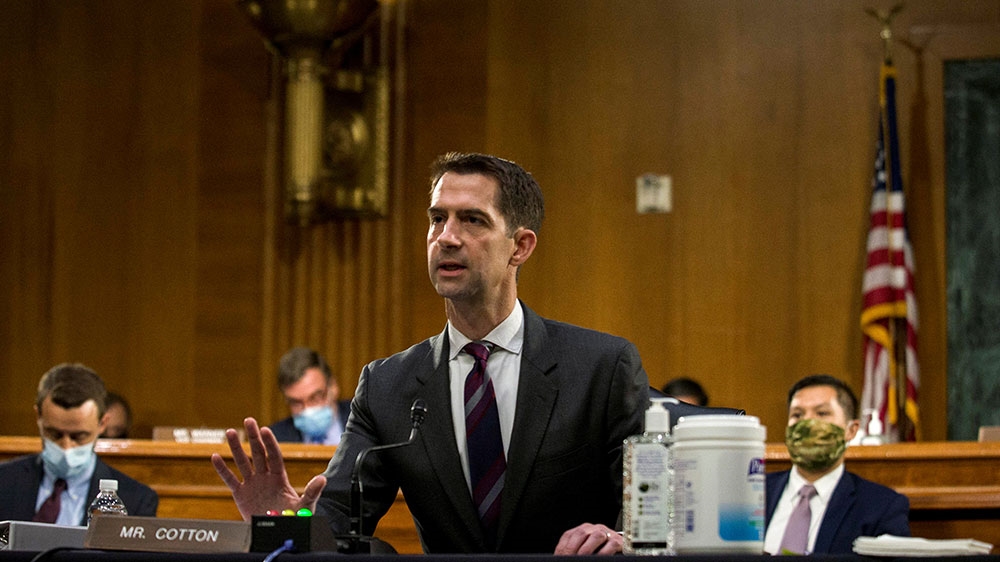 The cavernous hearing room was eerily empty, as the Senate observed strict protocols to protect against the spread of coronavirus. Ratcliffe said that, if confirmed, he would focus on the virus’s impact, questions about its origins in China and US competition with Beijing.

“If confirmed, the intelligence community will be laser-focused on getting all the answers that we can regarding how this happened,” Ratcliffe said.

Trump’s administration and the government in Beijing have been engaged in a bitter war of words about how the coronavirus spread, as the illness has killed more than 60,000 Americans and cratered the country’s economy, complicating Trump’s run for re-election in November.

Ratcliffe said he views China as the greatest threat to the US, on many fronts. “I won’t say all roads lead to China, but a lot of them do,” he said.

Trump nominated Ratcliffe, a member of the House of Representatives Intelligence Committee since January 2019, to be director of national intelligence last year. The nomination was dropped amid questions about his lack of experience and partisan reputation, but the Republican president nominated him again this year.

Now, a few Republican committee members, including committee chair Richard Burr, promised they would back Ratcliffe, while stressing the need for the director to be politically independent. Democrats appeared unconvinced.

The committee’s top Democrat, Senator Mark Warner, said he was concerned about partisanship from Ratcliffe, a strongly outspoken supporter of Trump during impeachment hearings last year, especially regarding intelligence oversight and whistle-blowers.

“I still have some of the same doubts now as I had back in August,” Warner said.

There has been no Senate-confirmed Director of National Intelligence since August, when former Republican Senator Dan Coats retired. The current acting DNI, Ambassador to Germany Richard Grenell, is seen as a fierce Trump partisan.

Trump and aides have sharply criticised intelligence officials, accusing them without presenting evidence of working for a “deep state” seeking to undermine his presidency.

Ratcliffe took pains to break with the president, saying he did not know what Trump meant last year when he said intelligence agencies had “run amok”. He refused to endorse Trump’s assertion of a “deep state” inside the intelligence community and insisted that he would not shade intelligence findings to meet the desires of anyone, including the president.

“Let me be very clear: Regardless of what anyone wants our intelligence to reflect, the intelligence I will provide, if confirmed, will not be impacted or altered as a result of outside influence,” he told the Senate Intelligence Committee.

Burr, who privately criticised Ratcliffe when his name was first floated last year, promised the Republican-majority panel would quickly recommend Ratcliffe to the full Senate.

His chances of securing the job appear better, but confirmation is not guaranteed. Trump’s fellow Republicans hold a narrow 53 to 47-vote in the chamber, and he needs 51 votes for confirmation.

Much about the hearing was unusual, or unprecedented. Ratcliffe’s family did not attend.

Some staff and senators wore masks into the room, but removed them to speak. Ratcliffe did not wear a mask. Members of the press were limited to a small number, who provided pool reports.

Burr closely questioned Ratcliffe about his view of Russian interference in US elections. The nominee said he agreed that Russia sought to sow discord in the US and interfere in the 2016 and 2018 campaigns.