Guayaquil, Ecuador – For journalists covering the coronavirus pandemic, getting the story comes life and death risks. There is perhaps no place where that is more apparent than in Guayaquil, Ecuador, where at least 12 reporters have died during the pandemic, and more than dozen have gotten sick, according to rights groups.

Guayaquil, a densely populated port city in the western part of the country, made international headlines last month as bodies piled up, in homes and at times on the streets, in what is believed to be one of Latin America’s hardest-hit areas.

So far, at least 1,300 people have died across the country and 27,000 have been infected, though experts fear the numbers are much higher. According to Ecuadorian authorities, more than 10,200 people died in Guayas province last month. The usual monthly average for Guayas is about 2,000 deaths. It is unclear how many of the deaths were directly related to COVID-19 because many people died and were buried without being tested.

Among the dead are Olmedo Mendez, Victor Hugo Pena, Angel Sanchez, Manuel Varas, Paul Tobar, Carlos Loor, Omar Paredes, Luis Alberto Flores, Roberto Roman, Augusto Iturburu, Omar Salvatierra and Rosendo Escobar Cardenas. All were journalists on the front lines in Guayaquil as the death toll drastically rose. It is unclear how many were infected by COVID-19, as not all were tested.

“Most of the journalists are believed to have been infected while working. But you cannot be sure,” said Cesar Ricaurte, the CEO of Fundamedios, a non-governmental organisation promoting press freedom across the Americas. 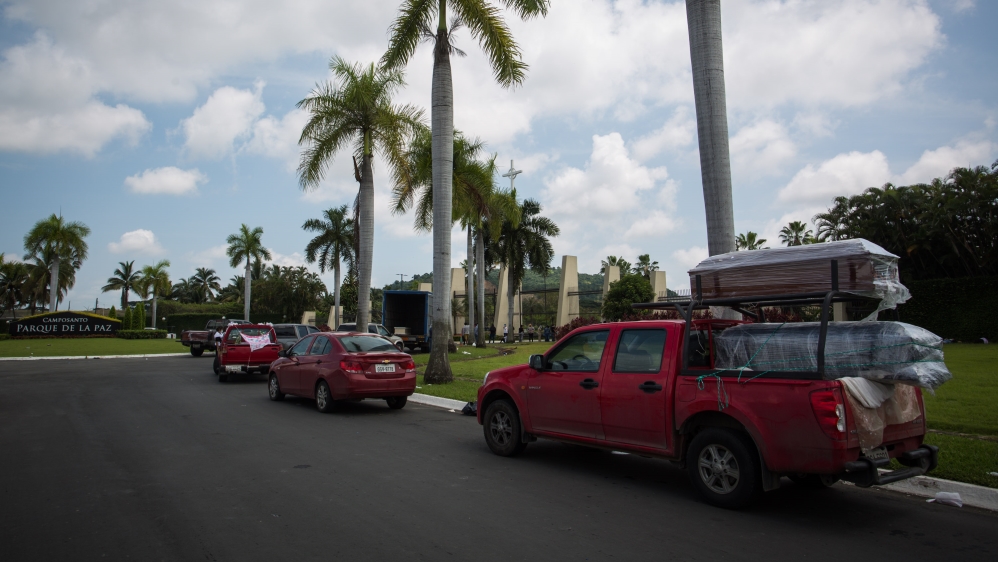 Their deaths sent shock waves throughout the region, leaving many journalists to weigh the risks of covering the pandemic on the streets.

“There were journalists on the streets until the end of March,” Ricaurte told Al Jazeera. “Then, we started seeing cases of infections and deaths, and the journalists stayed home. It was a kind of self-censorship. They were terrified and didn’t have protection gear.”

‘He shouldn’t be dead’

Agusto Iturburu was a sports journalist with the El Telegrafo newspaper in Guayaquil. Large sporting events were held in late February and early March as the virus began to take hold in the country. Iturburu was covering those sports events and did not – like most local journalists in the area – use personal protective equipment (PPE). Agusto died of COVID-19 in mid-April after being hospitalised for weeks.

“It was hard for me to lose Augusto. He was like a little brother to me,” said Nestor Espinoza, the editor of El Telegrafo, who had last seen the sportswriter on March 12. Iturburu was sick at the time.

“I decided not to expose myself. I’m concerned that the media [outlets] haven’t provided protective equipment to journalists,” Espinoza said. With the lack of equipment, many others did the same.

“He shouldn’t be dead … His death is as wrong and unjust as the thousands of dead in Guayaquil.” 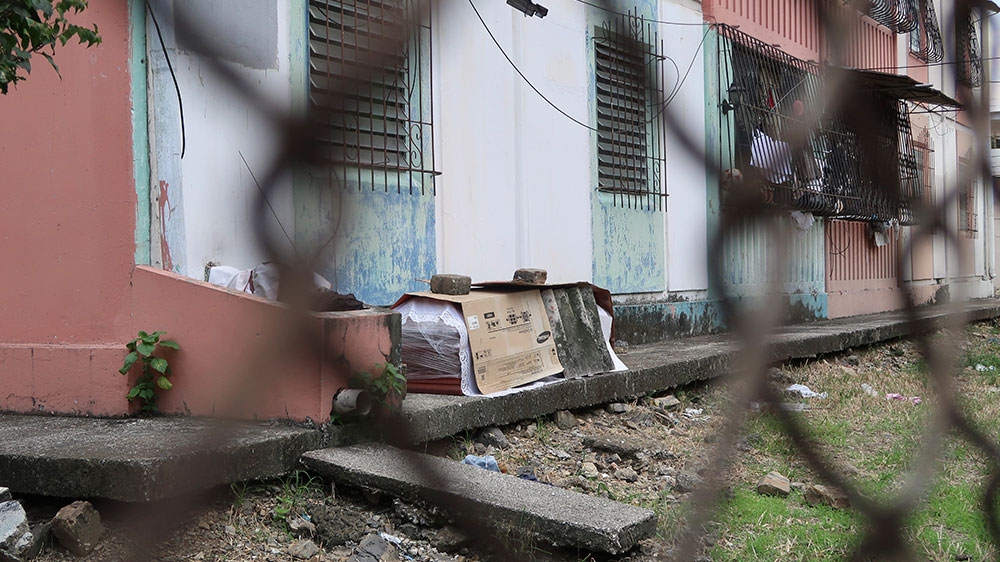 A coffin with the body of a person who is believed to have died from COVID-19 disease lays wrapped in plastic and covered with cardboard, outside a block of family apartments in Guayaquil, Ecuador [iliberto Faustos/Reuters]

The devastation hit the newsrooms of other outlets as well. Omar Paredes was a driver for journalists and photographers with the Expreso newspaper in Guayaquil. He died in mid-April of respiratory failure with symptoms of COVID-19.

“An essential moment for me during this fierce crisis in my city, was when I lost one of my close friends from work, Omar Paredes. No one could get him an oxygen tank,” said Blanca Moncada, a journalist with Expreso.

She said after his death and those others, she feared that they may be asymptomatic and could infect others.

“Imagine – one of my schoolmates is dead. Several friends have died. Omar is dead. I’m not exempt from anything happening to me,” Moncada told Al Jazeera as her eyes welled with tears.

“People are scared. Many are home with depression because their friends and colleagues died. Most don’t have any safety equipment. The journalists don’t dare to work under these conditions; they don’t want to risk their lives,” Moncada said.

Despite the risks, Moncada still works from the field.

“In the beginning, I was working from home, making phone interviews etc – but it’s not the same at all. And our work as journalists, the essence of journalism is so important in times like these. It’s our work to make visible what’s happening and give space for the voices that are otherwise silenced,” Moncada said.

Vice President Otto Sonnenholzner apologised in early April for the devastation COVID-19 has brought to the country.

“We have seen images that should never have happened, and as your public servant I apologise,” Sonnenholzner said. But the government has also accused the opposition of orchestrating a fake news campaign to sow division within the country. 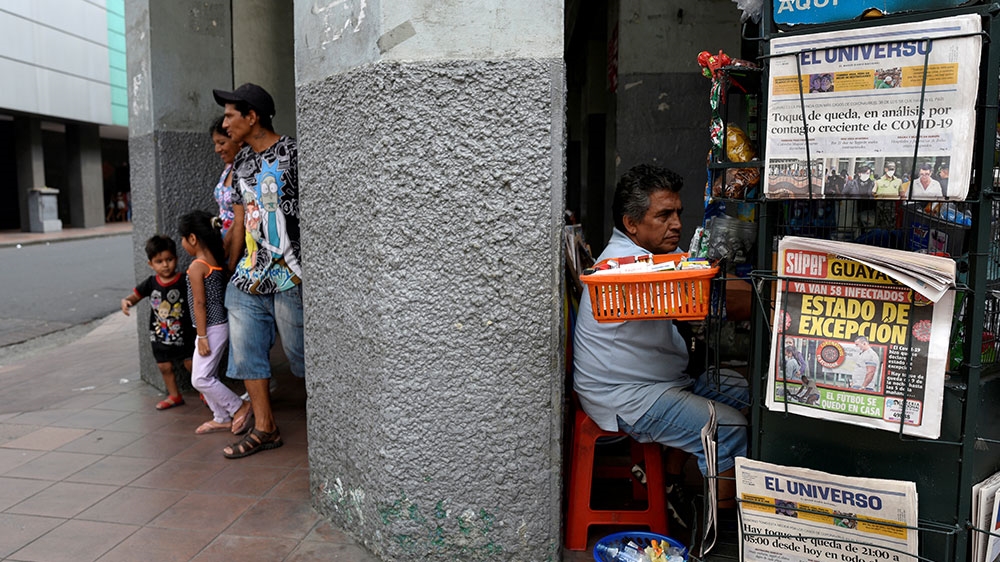 That is why Fundamedios’ Ricaurte says that journalists play an especially important role in Guayaquil as the death toll climbs.

“It’s not because journalists’ lives are more important than the many others who died in this emergency. But journalists play an important role in society, in democracy,” Ricaurte told Al Jazeera.

“The state has a special obligation to protect them so they can do their job. And it has not fulfilled that in Guayaquil, he added. “It’s important that we analyse the situation in Guayaquil, so it does not repeat elsewhere.”