An internal government document circulating in the United States projects a surge in coronavirus cases and a sharp rise in daily deaths by June 1, the New York Times reported on Monday, even as President Donald Trump urged states to lift restrictions in place to quell the pandemic.

The document, based on modelling by the Centers for Disease Control and Prevention, projects that COVID-19, the respiratory disease caused by the virus, will kill 3,000 Americans a day by the end of May, the Times said, up from a current daily toll about 2,000.

The projections, pulled together in chart form by the Federal Emergency Management Agency, forecast about 200,000 new cases each day by the end of the month, up from about 25,000 cases now, the Times said.

Asked about the Times report, White House spokesman Judd Deere said, “This is not a White House document nor has it been presented to the Coronavirus taskforce or gone through interagency vetting.”

Deere’s statement said: “The health of the American people remains President Trump’s top priority and that will continue as we monitor the efforts by states to ease restrictions.”

The coronavirus has infected more than 1.1 million Americans and killed nearly 68,000.

Trump has given varying predictions for the number of people in the US who will succumb to COVID-19, which has no vaccine or known cure.

But on Sunday night, the president acknowledged the death toll might climb much higher.

“We’re going to lose anywhere from 75, 80 to 100,000 people. That’s a horrible thing,” he said during a town hall event broadcast on Fox News Channel. 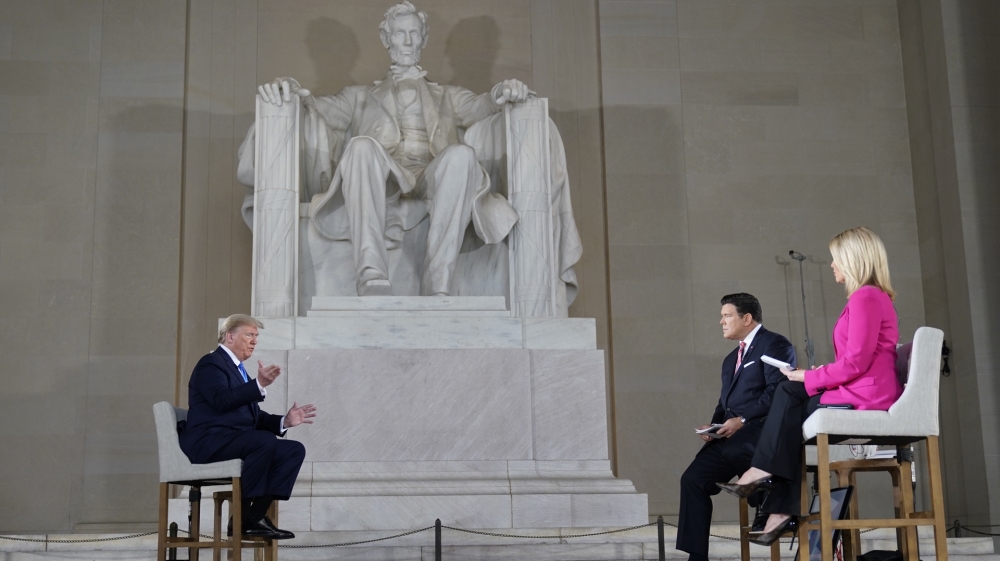 US President Donald Trump participates in a live Fox News Channel virtual town hall called, America Together: Returning to Work, with hosts Bret Baier and Martha MacCallum being broadcast from inside the Lincoln Memorial in Washington, DC on Sunday night. [Joshua Roberts/Reuters]

As of last week, the University of Washington’s IHME predictive model, often cited by White House officials and state public health authorities, projected a first wave of 72,400 coronavirus deaths in the US.

States have felt pressured to ease restrictions on businesses and social life to revive their battered economies, but health experts have urged caution for fear of a resurgence of the virus.

In New York, the state that accounts for about a third of all US infections, Governor Andrew Cuomo on Monday outlined plans to ease restrictions on a regional basis. He sketched out the plan while at least half of the other 50 states moved ahead with plans of their own to restart their battered economies.

Without giving a specific timeframe, Cuomo told a daily briefing that construction, manufacturing and the wholesale supply chain would be allowed to start up under the first phase of a four-step return to normality.

The state’s stay-at-home order, in place since mid-March, is due to expire on May 15, and the Democratic governor has said previously that some regions outside the New York City area with a relatively low number of cases may start lifting restrictions after that date.

“Reopening is more difficult than the close-down. The close-down was relatively simple,” he said, cautioning that every part of the state of 19 million people needed to move gradually.

In the final phase, arts and entertainment and recreation facilities, and education would restart.