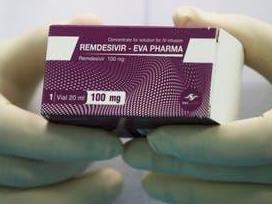 Gilead Sciences is to launch a clinical trial on an inhaled form of remdesivir which it says could be used to treat Covid-19 patients outside of hospital settings.

Remdesivir, an exploratory antiviral drug, has been shown to reduce recovery times in coronavirus patients suffering from respiratory problems. It is one of only two drugs approved by health authorities in the UK to treat the disease.

The drug is administered intravenously to the most patients, but Gilead is to test whether it is effective if breathed directly into the lungs through a nebulizer – a device commonly used by asthma patients.

“Based on current scientific understanding, the upper respiratory tract is the most prevalent site of the [Covid-19] infection early in disease,” Merdad Parsey, Gildead’s chief medical officer, said in a statement on Wednesday.

“Delivering remdesivir directly to the primary site of infection with a nebulized, inhaled solution may enable more targeted and accessible administration in non-hospitalized patients.”

The US-based trial will include around 60 healthy adults aged 18-45 and will first test how patients react to the inhaled solution.

Gilead said that if the trial is successful, the vaporised treatment could be rolled out across outpatient services – such as GPs surgeries – to medicate patients who don’t need hospital treatment.

“Additional clinical trials evaluating remdesivir in combination with anti-inflammatory medicines, in vulnerable patient populations and in outpatient settings are ongoing or planned to initiate in the near future,” Dr Parsey added.

“We will continue to share emerging data with regulatory authorities and the scientific and medical community as we work together to help address the needs of patients around the world.”

First developed in 2009, remdesivir was initially used to treat hepatitis C but proved ineffective. It was also used to treat ebola but didn’t work against that disease either.

However, remdesivir later showed promise in fighting SARS and MERS — respiratory illnesses caused by coronaviruses — in animal studies, which is why researchers thought it might help fight the new coronavirus.

Studies have shown that the drug, exclusively manufactured by Gilead, can reduce a Covid-19 patient’s recovery time by around four days.

Scientists and campaigners condemned the Trump administration earlier this month when it bought up 500,000 treatment courses of the drug, amounting to 100 per cent of Gilead’s July production and 90 per cent for August and September.

Just days later, officials in Brussels approved use of the drug in the EU and began negotiations with Gilead to secure doses for EU member states.

The EU Commission also said it was talking to the biopharmaceutical giant about its production capacity. Health commissioner Stella Kyriakides said on Tuesday that the talks have been “constructive” and the EU has so far agreed a deal to supply 16 countries.

“Our main objective is to ensure that the needs of patients with COVID-19 can be met as quickly as possible in all EU member states,” Ms Kyriakides said. “We stand ready to support a coordinated EU procurement procedure to secure swift, broad and fair access.”