Qatar has announced a series of measures, including the suspension of all incoming flights for a preliminary two-week period, as a precautionary measure to contain the spread of the coronavirus.

The moves were announced on Sunday following a meeting between Qatar’s Emir Sheikh Tamim bin Hamad Al Thani and the Supreme Committee for Crisis Management.

An economic and financial package will provide incentives amounting to 75 billion Qatari riyals ($23bn) to help support the private business sector during the outbreak.

The statement from the committee included, “Stopping all incoming flights to Doha, starting Wednesday evening, which corresponds to March 18, for a 14-day period that can be extended,” adding cargo and transit flights would be exempted from the ban.

It said Qatari citizens would continue to be allowed into the country after they quarantine for two weeks.

The announcements came after Qatar’s health ministry announced 64 new confirmed cases of coronavirus in the tiny Gulf nation, taking its total number of cases to 401.

So far 7,950 people have been tested for COVID-19 while four people have reportedly recovered, according to the ministry.

The committee announced all forms of public transport, including buses and its newly launched metro system, would be suspended starting Sunday night.

To limit physical interaction, the committee said all government employees above the age of 55, pregnant women, and people suffering from long-term illnesses, such as diabetes or chronic heart disease, would be allowed to work remotely.

The directive reiterated a government decision made earlier this week that attendance at all schools would be suspended with government and private schools continuing through remote education.

The committee said final year high-school students will still have to sit their end-of-year exams.

Although not included in the committee’s statement, the Ministry of Commerce and Industry announced in a tweet on Sunday that dining in restaurants and cafes would also be banned until further notice as part of the efforts to contain the spread of the virus. Ordering food deliveries home would still be allowed. 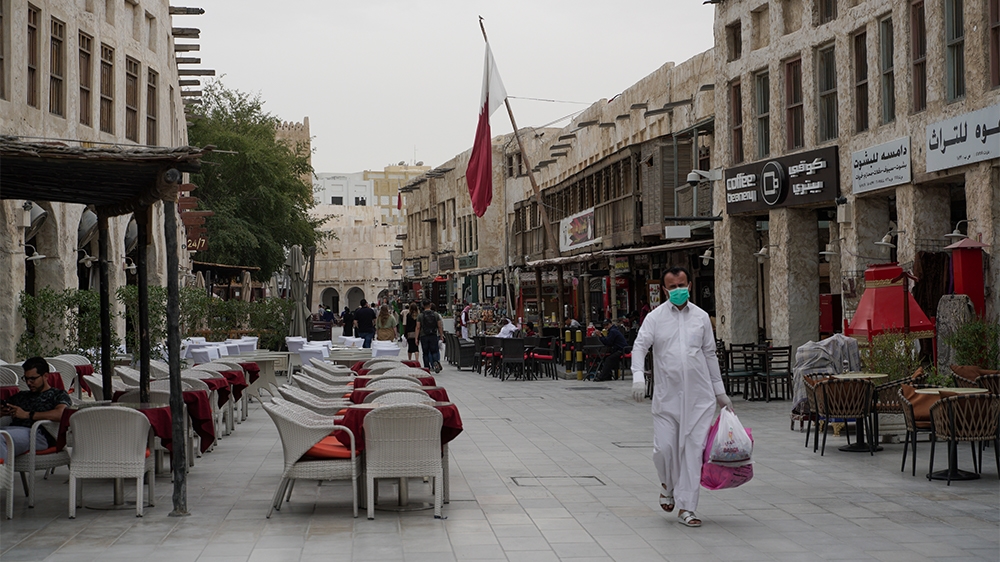 A series of moves focused on the banking sector were also announced, including the encouragement of banks to postpone loan instalments from the private sector by extending grace periods to six months.

Other measures included exempting food and medical goods from custom duties for a six-month period, as well as exempting electricity and water bills from taxes.

Other sectors on the exemption list included tourism, small and medium-sized businesses, and logistics.

Many of the initial cases diagnosed in Qatar – one of the richest nations in the world with a population of about three million – were from a group of citizens and their foreign staff repatriated from Iran.