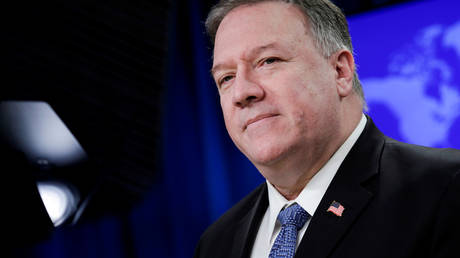 United States Secretary of State Mike Pompeo has warned China not to spread “outlandish rumors” about the Covid-19 virus and accused China of trying to shift the blame for the pandemic onto the US.

In a phone call with China’s top diplomat Yang Jiechi, Pompeo relayed “strong US objections” to China’s recent suggestion that the virus could have been brought into the country by the US military.

Pompeo stressed to Jiechi that “this is not the time to spread disinformation and outlandish rumors,” a State Department spokesperson said.

Chinese foreign ministry spokesperson Lijian Zhao said last week that it might have been the US army “who brought the epidemic to Wuhan” and called on the US to be transparent about its “Patient Zero.” Speculation soon mounted that the US delegation at the Military World Games in Wuhan in October was the source.

Also on rt.com
‘Where was your patient zero?’ Chinese official speculates AMERICANS may have infected Wuhan at army games & calls to ‘come clean’

Zhao was not the only international figure to point the finger at Washington, however. The head of Iran’s elite Revolutionary Guards last week suggesting Covid-19 could be the “product of a biological attack by America which initially spread to China and then to Iran and the rest of the world” — though there is no proof for either of those theories on the origins of the rapidly-spreading coronavirus.

On the call, Jiechi told Pompeo that US attempts to smear China’s efforts would “not succeed.”

China last week accused Pompo of “slandering” the country by repeatedly referring to Covid-19 as the “Wuhan virus” — a practice Beijing said was “despicable” and stigmatized the country.