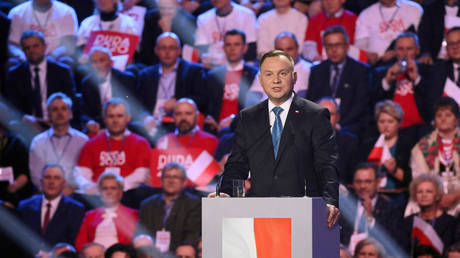 Poland’s deputy PM Jaroslaw Gowin has suggested extending current President Andrzej Duda’s term to deal with the coronavirus crisis — not for weeks or months, but for a whole two years.

Poles are set to go to the polls for a presidential election on May 10, despite mounting concerns that holding elections in the middle of a pandemic could be careless.

Gowin, who heads Porozumienie, which is aligned with the ruling party, said “scientists’ data” shows that postponing the elections by two years “would be safe.”

“Such a change would require amending the constitution, so I appeal to all opposition parties for support,” Gowin said in a televised statement. He added that if the constitution was amended, Duda would not be allowed to seek re-election when the two-year extension had ended.

So far, it appears Duda himself is not a fan of the proposal to extend his term. That is perhaps because the latest polling suggests he would win a second term handily if the May election goes ahead.

His critics say, however, that the president may see an opportunity amid the chaos and that Duda would prefer to forge ahead with the May election rather than waiting until later in case his polling numbers dropped if the Covid-19 crisis in the country worsened. There are also concerns that turnout could be as low as 31 percent due to the virus outbreak.

Poland currently has 3,149 confirmed cases of Covid-19 and 59 patients have died of the disease.

Civic Platform, Poland’s main opposition party, said Friday that there is “no way” it would support extending Duda’s term and said a state of natural disaster should be declared which allows for the postponement of elections.