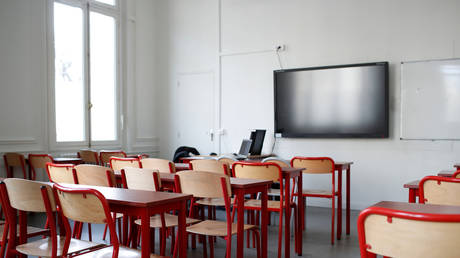 When public schools in Paris finally reopen on May 11, only 10 percent of children will be accommodated, leaving many worried French parents in the lurch as they attempt to return to work after the Covid-19 lockdown.

The limited capacity is due to the numerous health measures which will need to be implemented in schools as restrictions are being phased out, the deputy mayor in charge of education Patrick Bloche told Le Figaro on Sunday.

“If we reach [this figure], it will already be very good,” Bloche said, given that Paris is within France’s ‘red zone’ for Covid-19 and that some school premises will struggle to accommodate many students while adhering to social distancing guidelines.

Also on rt.com
First Covid-19 case in France could have been as early as December, new evidence suggests


The 10 percent of children returning will be those of families living in “great precariousness” and those whose parents are caregivers, teachers, essential traders, or public transport system workers, he said.

According to unofficial estimates from school directors in the French capital, however, 40 to 60 percent of parents want to see their children back in school next week, despite the health complications. Some have reportedly even threatened to file complaints against the Paris city hall over the situation.

Parisian classrooms will also reopen according to age, with students in the CP and CM2 (six to 10 years old) age groups coming back first, while other levels won’t be back at their desks until June – posing a problem for parents who want to return to work in the meantime.

While many parents are eager to see their children return to school, local officials are increasingly concerned that they will not be able to accommodate pupils without putting them at risk amid the ongoing pandemic.

Also on rt.com
Macron warns life ‘won’t be back to normal’ as Covid-19 forces French to find new way of ‘social distance’ protest


Paris Mayor Anne Hidalgo is one of 300 mayors in the Ile-de-France region who wrote to President Emmanuel Macron asking for the reopening of schools to be postponed beyond May 11 in ‘red zone’ areas, saying the government’s current calendar for reopening is “untenable and unrealistic.”

The phased reopening of schools is increasingly being introduced across Europe, as countries slowly ease their way out of lockdown.

Denmark became the first country in Europe to reopen primary schools in late April, while in the Netherlands, primary schools are set to open from May 11. In other countries, including Ireland and Italy, schools are due to be closed until September. Meanwhile, Germany is set to make a decision on opening schools on May 6.