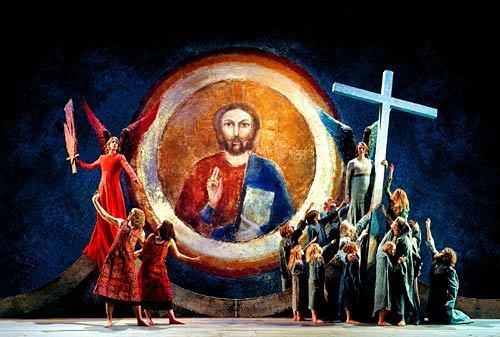 In 1632, when the bubonic plague was spreading death across Europe and killed at least one member of every family in a small Bavarian Alpine town, distraught villagers in Oberammergau made a vow to God to perform a Passion play depicting the death and resurrection of Christ if their lives could be spared.

As the legend goes, no further deaths were recorded and the Passionspiele — reenacting the end of the life of Jesus — has been staged every decade, or 41 times, since 1634.

The coronavirus pandemic has now forced the cancellation of the 2020 edition — a total of 109 five-hour-long performances scheduled to run from May 16 to October 4. Officials announced Thursday that the world-famous open-air production, which features 2,500 residents from the town of 5,400, would be postponed two years, to May 2022.

Local health authorities told organizers the show could not go on this year because of social distancing regulations in place to try to slow the spread of the coronavirus, which has hit the southern German state of Bavaria especially hard. As of Thursday, more than 2,000 of Germany’s 15,320 confirmed cases of coronavirus were in Bavaria, as were 13 of the country’s 44 deaths from COVID-19.

“The corona pandemic has made it impossible to complete this year’s play without endangering the performers and guests,” the organizers of the Passion play wrote on its website. “The health of our guests and participants is our highest priority.”

The German government has closed down much of public life in recent days. Chancellor Angela Merkel warned that the country could face a lockdown similar to measures implemented in Italy, Spain, France and Belgium. The governor of Bavaria, Markus Soeder, warned on Thursday that a statewide lockout would soon be introduced to slow the spread of the virus.

Half the village of Oberammergau is onstage or backstage for the once-a-decade performances — and you have to be an Oberammergau resident for 20 years to participate. The renditions of the “Passion Play” have evolved considerably over the centuries; at times it has been accused of promoting anti-Semitism. Adolf Hitler attended and approved of the performance in 1930.

Makeup is traditionally forbidden (except for the blood visible during Christ’s scourging and crucifixion), so all the long hair and beards on view are authentic.

“It’s a strange rupture that’s hit us and the plug has been pulled,” said director Christian Stueckl in an interview with the Bavarian Broadcaster, or BR, on Thursday. “It’s been a really strange situation. I’m almost relieved right now,” he added, referring to weeks of uncertainty about this year’s edition, in the face of canceled practice sessions due to the pandemic.

Stueckl said has been working on the “Passion Play” with his cast of thousands for the last 10 years. “It’s only a postponement. We’re going to keep going. A lot of other people are a lot worse off than we are.”

Anton Sperr, a local leader, told BR television: “It wasn’t an easy decision for us to cancel the ‘Passion Play,’ but from a medical point of view there was no choice.”

The town — which lies 45 miles south of Munich near the Alpine ski resort of Garmisch-Partenkirchen — relies heavily on the tourists who flock in from around the world to see the play. About half of the tickets sold are to people living abroad, many from the United States.