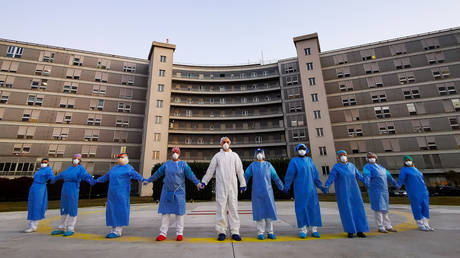 More than 90,000 medics have been infected with Covid-19 around the globe, the International Council of Nurses (ICN) said, warning the actual number could be two times higher and sounding alarm over protective equipment shortages.

The figure “has risen from 23,000 to we think more than 90,000, but that is still an under-estimation because it is not (covering) every country in the world,” Howard Catton, the ICN’s head, told Reuters.

The numbers provided by the group were based on data from national nursing associations, government releases and media reports in 30 countries. But the actual figure of infected health professionals could be up to 200,000, the organization calculated from the average infection rate of six percent for medics and the current 3.5 million cases of Covid-19.

The number of fatalities among nurses has also spiked from 100 in early April to over 260, according to the group’s data.


The highly contagious nature of Covid-19 and shortages in protective gear, experienced by even the wealthiest nations, has seen numerous medics becoming patients since the start of the pandemic in China’s Wuhan in December. In many cases, they had the disease in a harsh form and died from the complications it caused.

Earlier this week, Spain – where the epidemic is now in remission – said that out of its 250,000 infections 43,956 or 18 percent were among health workers. The mortality rate among medics was put at 0.1 percent.

Italy, the first European country to take a heavy coronavirus blow in early April, reported more than 100 doctors succumbing to the disease. The US said last month that it had lost 27 medics to Covid-19.


Health professionals in most countries sounded alarm and even protested the lack of personal protective equipment – from masks to full body gowns.