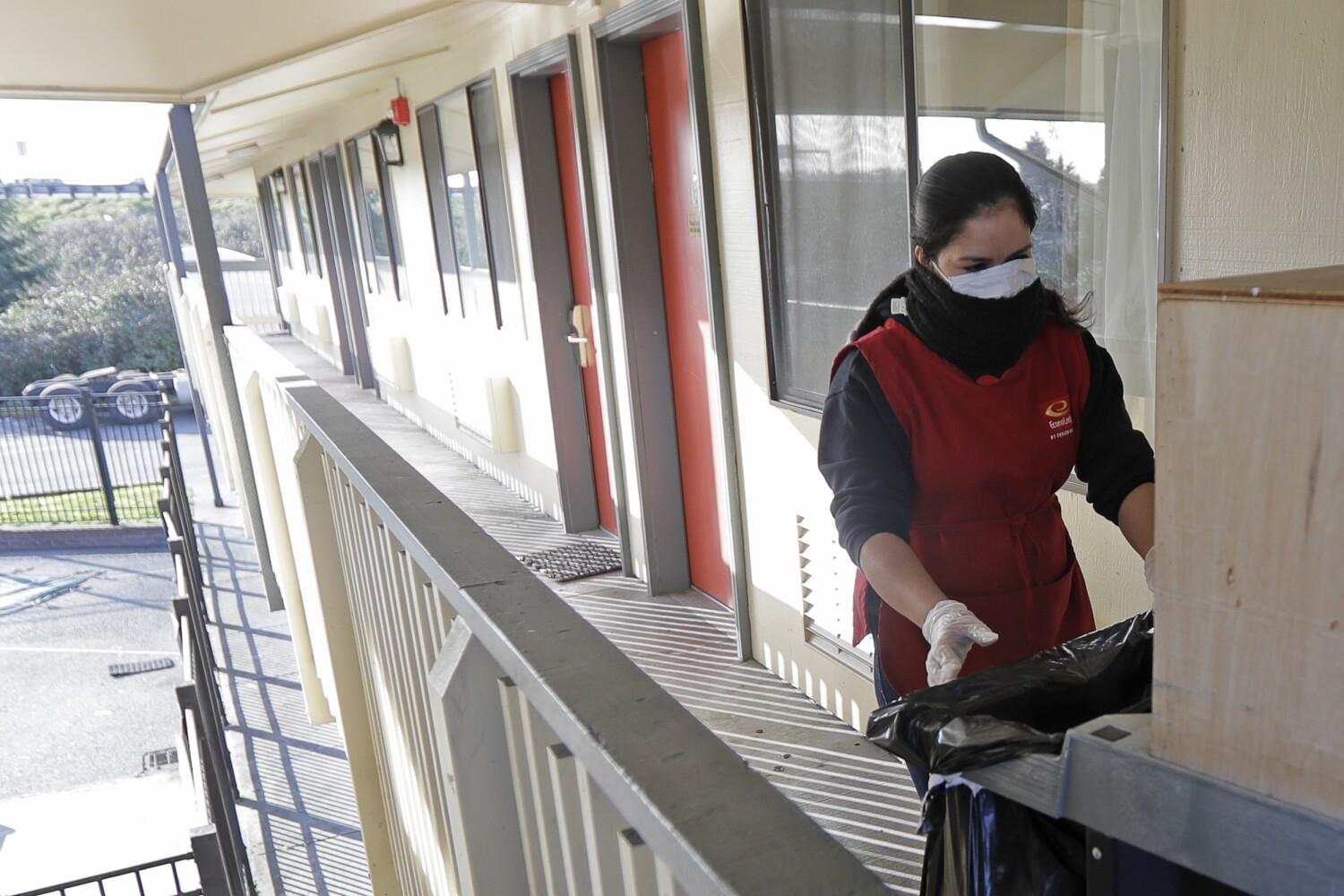 Health officials here thought they found a fine place to quarantine COVID-19 patients: a motel that was up for sale.

This week King County completed the $4-million purchase of an Econo Lodge in Kent, Wash., a diverse, lower-income community of 130,000 just south of Seattle.

“We hope to have it operational within days,” County Executive Dow Constantine announced Wednesday at a news conference on the mounting coronavirus deaths. Officials said it could house up to about 80 patients.

But the plan has created a firestorm of opposition in Kent, where community leaders feel blindsided.

“We have invested millions of dollars into the infrastructure around this location, and now visitors and residents will be greeted by a public health quarantine facility,” the mayor, Dana Ralph, said Wednesday at a hastily called news conference. She was flanked by the police chief and the fire chief in a united front of opposition.

“The county intends to bring sick people from wealthier and less diverse communities and drop them off in Kent without regard to our community or the people in it,” Ralph said.

The clash in Washington state, where 11 of the 12 U.S. coronavirus deaths have occurred, could be a preview of conflicts to come as health officials nationwide scramble to find sites where people who test positive can be isolated from the general population. Real estate is more affordable in less affluent areas, raising equity issues.

Kirkland, Wash., where nine of the patients have died, is an upscale, lakefront suburb just east of Seattle, with rapid development of condominiums and pricey new houses replacing old ones. Kent is a longtime farm community whose population has grown as soaring property prices push people out of Seattle.

Mark Scarff, who runs one of the state’s largest Ford-Lincoln dealerships in Kent, said he realizes that coronavirus patients will need to be quarantined somewhere. But he sees the plan to put them in Kent as unfair.

“They’re trying to shove Seattle’s problem away, and away from the affluent places,” he said. “They’re using this outbreak crisis as an excuse to not go through the normal channels, and to shove it down our throat.”

Kent officials were particularly concerned that there would be no legal requirement for people in quarantine to stay in the building, raising the possibility that they would be able to come and go.

“I took an oath to protect our community, which is why I cannot support this ill-advised and dangerous plan by King County,” Police Chief Rafael Padilla said at the news conference.

In an interview Thursday, Ralph said she found out thirdhand Monday evening about the motel purchase. After she called Constantine’s office, she learned that county health officials had been considering the hotel for months as a permanent quarantine facility for patients with hepatitis, tuberculosis, measles and other illnesses.

Ralph said King County is divided into two economies. Seattle and its east side have Amazon, Microsoft and other booming companies, with wealthy, predominantly white bedroom communities. On the other side are places like Kent, which has large numbers of people of Asian, Latino or African American heritage.

“So we’re taking patients currently being exposed in the wealthier communities on the east side and putting them down in the middle of our city,” she said. “An affluent community honestly would have more resources to handle a potential disruption like this.”

Ralph said managers of some of her city’s larger businesses called her and threatened to relocate. “We can’t take that kind of hit to our economy,” she said.

Chase Gallagher, a spokesman for Constantine, said in an interview Thursday that the motel is part of King County’s “coordinated and aggressive response” to the growing outbreak. The county plans to spend $1.5 million fixing up the motel and hiring employees, he said.

He said officials found no other property that met the requirements of the Seattle and King County Public Health agency of having rooms with individual heating and ventilation units and doors that open to the outside instead of a hallway — and certainly none in the $4-million range.

Earlier in the day, the health agency announced 20 more confirmed COVID-19 cases in King County, bringing the total to 51, including 10 deaths. Officials urged people at elevated risk of severe illness to “stay home and away from large groups of people as much as possible.”

Dennis Zaborac, the owner of Kent Bowl, a 32-lane bowling alley near the motel, said that he didn’t mind the county’s plan until he learned that patients wouldn’t be placed in lockdown.

“It makes no sense to follow the quarantine if they can walk in, walk out, and go across the street to Denny’s and have dinner,” he said. “It’s an old hotel where they’ve had trouble with drugs. If they couldn’t control the drugs, how are they going to control the virus?”

He said fears about the coronavirus hadn’t stopped people from bowling, with the usual senior league in action Thursday morning.

Officials are also setting up modular housing units in several sites around King County, in case homeless people become infected with the coronavirus.

News that one 32-room facility is to be located in White Center, an unincorporated area southwest of Seattle, prompted immediate opposition.

“I understand why this facility is needed,” state Sen. Joe Nguyen, a Democrat who represents the neighborhood, wrote in a statement Wednesday. “But the appearance of placing it in a neighborhood that has already been historically marginalized conveys a message about whose safety we most value in our society that is not lost on me.”

By Thursday, after hearing from constituents, Nguyen had refined his view. He said he didn’t oppose putting the units in the neighborhood where he grew up with immigrants and people of color, only that he wanted to be sure they are installed and managed in ways that make residents feel comfortable.

“We get that it’s important, and that we need this,” he said. “For the most part, people have been positive. It’s a very supportive community, and we take care of each other.”