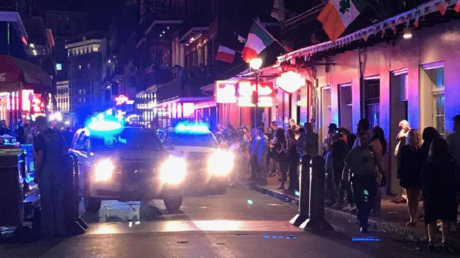 The immense gravity of the coronavirus crisis has yet to sink in fully and, despite the best efforts of authorities in warning the public, hordes of people have apparently ignored social distancing advice in favor of partying on.

Footage appeared on social media over the weekend of New Orleans police clearing the city’s popular party hotspot the French Quarter, after the state’s governor banned gatherings of 250 people or more.

However, revelers on Bourbon Street were defiant in the face of sound medical advice and emergency protocols, opting instead to twerk at police who were attempting to clear the area.

“This is the way the world ends, not with a bang but a twerk,” one disillusioned commentator captioned footage from the scene.

Mayor LaToya Cantrell also shared a photo of police clearing partygoers from the streets as news broke of the city’s first coronavirus fatality, a 58-year-old resident.

The downright bizarre refusal to follow the advice of medical authorities from around the globe – namely to self-isolate, engage in social distancing and to wash your hands while avoiding touching your face – is not unique to the US, however.

Police were forced to intervene to clear English tourists off the streets of Benidorm, after they defied a decree from the Valencian government to avoid bars and restaurants, which had already been ordered to shut.

Not far from here, nurses & doctors are working to prepare for the impact of a global pandemic. Everyone is working 24/7. This is an insult to their efforts. There is very clear public health advice. Follow it. All options will be kept under constant review #CoronaVirusUpdateshttps://t.co/XQvJ7tC13D

Elsewhere, many large sporting and entertainment events have been postponed or cancelled in the face of the crisis across the world. Many, but not all, unfortunately.

Welsh rockers Stereophonics have been lambasted online for continuing their UK tour despite the potential risk to fans, crew and venue staff alike.

After playing to a huge audience in Cardiff on Saturday night, a slew of complaints appeared online, questioning the decision to go ahead with such a large public gathering.

“Why this wasn’t cancelled is beyond me. Extraordinarily irresponsible,” added another user.

Meanwhile, footage of teenage superstar Billie Eilish performing in Miami on the first date of her US tour has been met with similar criticism after eyewitness video showed her drinking from a water bottle before unceremoniously drenching fans in her immediate area.

“I think she should be arrested. How is this any safer than someone licking ice cream in a grocery store, then putting it back into the freezer for some unsuspecting person to buy?” wrote one concerned Twitter user.