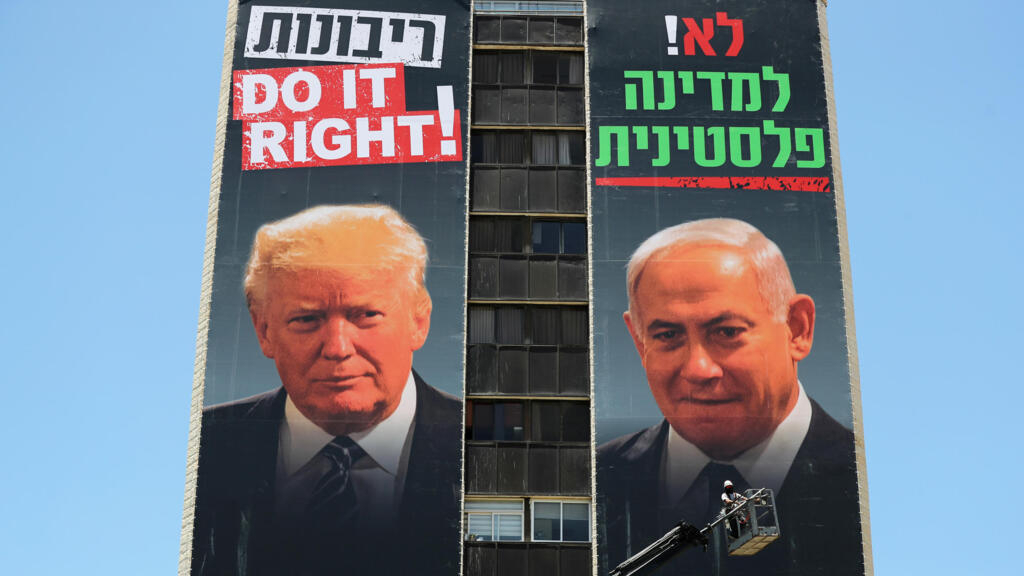 Israeli Prime Minister Benjamin Netanyahu’s plan to begin annexing parts of the West Bank as soon as July 1 threatens to have severe repercussions on both the Palestinian and Israeli economies, which are already struggling from the effects of a global pandemic.

The annexation – part of a peace plan unveiled by US President Donald Trump and Netanyahu at the White House in January – could mean imposing Israeli sovereignty on up to 30 percent of West Bank territory, although a final plan has not yet been unveiled.

“Truthfully, I think no one knows what will happen on July 1 or any day after. Not even Netanyahu himself,” said Elias Zananiri, vice chairman of the PLO (Palestine Liberation Organisation) Committee for Interaction with the Israeli Society. “One thing is clear. The Palestinians will in no way accept any form of annexation,” he told FRANCE 24 on Sunday.

The plan’s opponents, in Israel and abroad, warn that it will end any chance of bringing a lasting peace to the region. The plan has also been rejected by members of Israel’s far right, who argue that it does not go far enough and that by annexing only 30 percent of the West Bank Netanyahu is setting the stage for the establishment of a Palestinian state in the rest of the territory, which they oppose.

But the territory that would be left to the Palestinians could make it impossible to establish a viable state, with isolated pockets of land disconnected from one another and Israel controlling the contour of the territory.

“No matter whether the annexation is marginal or grandiose – whoever in Israel or elsewhere tries to sell the idea of a ‘marginal annexation’, as though it is in line with previous understandings between the Palestinians and Israel on a land swap, is misleading everyone. [A] land swap should be the outcome of a mutual agreement and not a unilateral move by Israel,” Zananiri said.

The annexation could lead to an eruption of violence in the West Bank and Gaza Strip, end Israel’s budding cooperation with the Gulf States and bring on painful sanctions by its European trade partners – all at a time when the Israeli economy is already reeling from the effects of the coronavirus crisis.

But it is unclear how this can be achieved, when imposing Israeli sovereignty on even some of the 2.3 million West Bank inhabitants would entail extensive and immediate judicial and administrative changes that would affect both the Israeli and Palestinian economies in the long term.

In the short term, the move could lead to violent clashes and political ramifications that would also hurt Israel.

Unilateral annexation “runs the risk of a confrontation between Israelis and Palestinians”, according to analysts from the Adva Center, a Tel Aviv-based progressive think-tank, writing in a position paper published on June 17. “Such a confrontation may further exacerbate the economic crisis caused by the corona epidemic, just as the second intifada exacerbated the crisis that accompanied the bursting of the high-tech bubble in 2000.”

They noted that the economic recession that followed the second intifada was described by Israel’s central bank as the longest in the country’s history.

“During the second intifada, the number of tourists entering Israel declined to fewer than a million,” according to the Adva Center analysts.

In the past few months, Israeli tourism – booming before the health crisis, with 4.6 million overseas visitors in 2019 – ground to a halt. Unemployment also spiked to 18 percent from 3.4 percent before the pandemic.

“To regain the losses caused by the corona epidemic, Israel needs not only to beat the Covid-19 virus but also to remain free of conflict,” they wrote.

Zananiri said he did not believe the Israeli move would lead to a new intifada but warned that “the future after annexation will look significantly different”.

“I do not think we will see Palestinians resort to armed struggle or attacks on Israel, but we also do not know what will happen if the PA loses control over the crowd. People are hungry for a normal life but never at the expense of national independence.”

Writing on the Ynet Israeli news website on Friday, veteran Israeli war correspondent Ron Ben-Yishai agreed. “What worries Israel the most is that Abu Mazen (Palestinian Authority leader Mahmoud Abbas) will decide to react to the annexation by fully or partially halting the civilian services provided by the Palestinian Authority”, something he has threatened to do as part of a pressure campaign on Israel.

“In such a situation, according to international law, Israel will be directly responsible for the day-to-day lives of Palestinians – their health, safety and welfare.”

“The financial burden on Israel will be enormous, as will be the effort to set up the mechanisms necessary for governing 2.6 million Palestinians during the coronavirus crisis,” Ben-Yishai added.

The Hamas movement has said it would consider an annexation a “declaration of war”.

“The resistance (Hamas) considers this decision to be a declaration of war upon the Palestinian people. The resistance will be the loyal and dutiful guard of the people throughout this war, acting in defence of our people, our land, and our holy sites,” a spokesman, known by his nom de guerre Abu Obeida, said in a speech on Thursday.

World leaders have also exhorted the Israeli government to abandon the plan.

“We are at a watershed moment,” UN Secretary-General António Guterres told a virtual meeting of the UN Security Council on Wednesday.

“If implemented, annexation would constitute a most serious violation of international law, grievously harm the prospect of a two-state solution and undercut the possibilities of a renewal of negotiations. I call on the Israeli government to abandon its annexation plans,” he said.

And 1,080 members of parliament from 25 European countries published an open letter on Wednesday expressing strong opposition to annexation, calling the move “fatal to the prospects of Israeli-Palestinian peace” and saying it would “challenge the most basic norms guiding international relations”.

“We are profoundly concerned about the impact of annexation on the lives of Israelis and Palestinians, as well as its destabilising potential in a region on our continent’s doorstep. These concerns are no less serious at a time when the world is struggling with the Covid-19 pandemic,” they wrote.

The letter called on European leaders “to act decisively in response to this challenge”.

“We fully support this: acquisition of territory by force has no place in 2020 and must have commensurate consequences. Failure to adequately respond would encourage other states with territorial claims to disregard basic principles of international law,” they wrote.

Europe was the single largest market for Israeli exports in 2019, accounting for 43 percent of total exports, according to the Adva Center paper. If European leaders were to act in concert, they could exert enough economic leverage to undermine the Israeli economy.

Some say Netanyahu regards the annexation of the Jordan Valley and the Jewish settlements in the West Bank as his historic legacy, now made possible thanks to the support of the Trump administration.

“Earlier annexations of East Jerusalem (1967) and the Golan Heights (1981) were seen as historic moves by previous heads of government,” writes Israeli journalist Sever Plocker in a Ynet op-ed. “This latest move, Netanyahu believes, will solidify Israel’s hold on parts of the biblical land of Israel and ensure defensible borders for the state.”

With American elections only months away and Trump doing poorly in the polls, the window of opportunity is small. The Democratic Party and its presumed presidential candidate, Joe Biden, have strongly criticised the plan and will not support it if they take over the White House in January.

Netanyahu’s legal troubles might also be adding to the urgency of implementing the plan. One way to deflect talk of his indictment on charges of bribery, fraud and breach of trust is by annexing Palestinian territories. And indeed, since the beginning of his trial on May 24, headlines on the coronavirus and impending annexation have overshadowed news about the hearings.

Netanyahu might also be wagering that opposition criticism and international pressure to stop the annexation will give credence to his claim – made in front of the courthouse on the day his trial began – that the proceedings were, in fact, a ploy against the entire Israeli right. “What is on trial today is an effort to frustrate the will of the people – the attempt to bring me down along with the right-wing flank,” he declared.