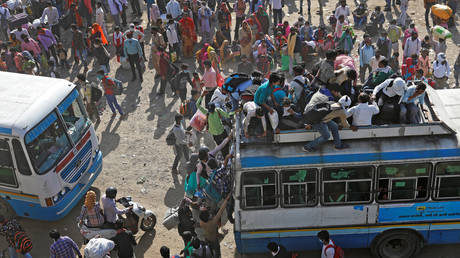 New Delhi has denied that it has been considering an extension of the 21-day lockdown for a week, with fears mounting that a massive migrant exodus is bound to undermine the effect of the measure.

India has been in a state of a complete lockdown since March 25, after Indian PM Narendra Modi announced sweeping restrictions on movement and ordered all non-essential commerce to shut down.

Public transport came to a screeching halt, with most states banning inter-state bus routes, railway lines and, in some cases, private transport, including buses and auto-rickshaws. While the measure was aimed at emptying the streets of people – quite a challenge for the world’s second-most-populous country of over 1.3 billion residents – the move backfired, as it saw thousands of migrant workers setting off on a long journey home, including on foot.

The sight of scores of workers, now jobless, roaming the streets without much money or food, has sparked concerns that the lockdown might not be that effective and prompted authorities to provide buses for the stranded migrants to take them home.

While there has been speculation that India might extend the lockdown, Cabinet Secretary Rajiv Gauba brushed them off as fake news on Monday.

“I’m surprised to see such reports, there is no such plan of extending the lockdown,” Gauba said, responding to a report by the Print, citing three anonymous officials.

“The analysis of the lockdown can be studied only when the chain is broken completely, but due to the mass migration across borders, that has not happened,” one of the “sources” told the publication, adding that the extension of a lockdown is on the table.

Also on rt.com
Why India, not the US or EU, will be the world’s main battlefield in the fight against Covid-19

India so far has been fairly successful in curbing the outbreak despite its size and population density. Since the start of the outbreak, it has registered 1,171 coronavirus cases as of Monday, including 30 deaths. Nearly 100 people have recovered.