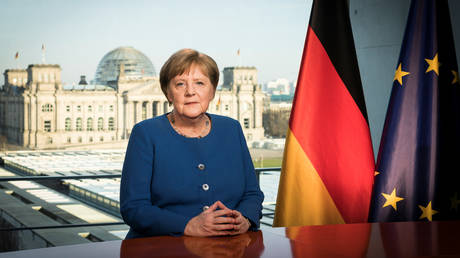 German Chancellor Angela Merkel made an emotional appeal to the nation, urging solidarity in face of the coronavirus epidemic that she described as the nation’s greatest challenge since the Second World War.

“This is serious, and you need to take it seriously,” she said, addressing the nation on Wednesday evening. “There has been no such challenge to our country since German reunification – no, since World War II – that relies so much on our joint action in solidarity.”

The fact that it was Merkel’s first-ever such speech in her 15 years in power – aside from the traditional holiday addresses at New Year – underscored the gravity of the situation.

Even some of her fans found the invocation of WWII hyperbolic and over the top, while praising her “calm and practical” handling of the crisis.

I’m a big Merkel fan. But come on, this is not the greatest challenge facing the nation since WWII, as she said today. The challenge is to resist that kind of hyperbole and act calmly and practically, as Merkel largely has done.

Others were outraged that she did not mention “Europe” even once, calling it a shocking failure of European solidarity.

In her prime time address, Merkel doesn’t mention term “Europe” once. No word on suffering in Italy and other countries. Nothing on European solidarity.Shocking. Nothing can justify this failure even if primary goal is to get Germans to change their daily behavior. #COVID19https://t.co/QVUMnezDGd

Merkel may have deliberately mentioned “the war” in order to avoid being accused of authoritarianism, a perpetual concern in modern German politics. Instead, she argued that giving up “hard-fought rights” like freedom of movement and travel was difficult, but only temporary and “necessary right now to save lives.”

Germany’s public health authority, the Robert Koch Institute, has estimated that there could be up to 10 million infections within three months if the people refused to follow “social distancing” recommendations.

“We are at the beginning of an epidemic that will be on the move in our country for many weeks and months,” institute president Lothar Wieler said at a press conference on Wednesday, describing the growth of the infection as “exponential” and adding that the effectiveness of current measures will only become clear in two weeks.

Merkel has not imposed the same kind of lockdown on Germany as Italy and Spain have, the European countries hardest-hit by the coronavirus.

As of Wednesday evening, Germany had recorded 11,979 confirmed cases of Covid-19, of which 28 have resulted in deaths. Schools, bars, clubs and gyms have been closed, but the population has not been ordered to shelter at home.