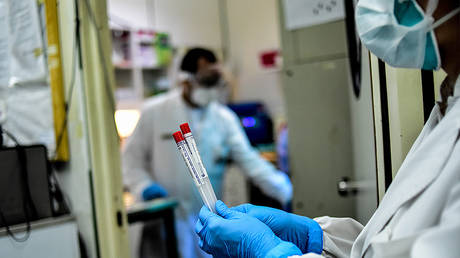 Fears that the coronavirus would mutate into a more dangerous strain appear to have been borne out, as research has identified that a new, more contagious strain of SARS-CoV-2 has become the dominant form worldwide.

Fears that the coronavirus would mutate into a more dangerous strain appear to have been borne out, as research has identified that a new, more contagious strain of SARS-CoV-2 has become the dominant form worldwide.

The new strain, which has been dubbed ‘Spike D614G’ has been proliferating in Europe since at least mid-February, and spread to become the dominant form during the month of March. It is far more contagious than the original strain which emerged from Wuhan, for reasons as yet unknown.

Wherever it emerged it became dominant very quickly, and in some countries it became the only common strain within weeks. The paper notes that the rapid global spread of the coronavirus has provided it with “ample opportunity for natural selection to act upon rare but favorable mutations.’’ Furthermore, if the virus does not wane away as the weather warms in summer there will be nothing to stop it mutating into more and more strains.

The research, which was carried out by a joint American and British team led by Los Alamos National Laboratory, has been released ahead of peer review as ‘an early warning’ to other researchers. As it stands, scientists studying the coronavirus around the world may be analysing the genetic sequence of the older strain, and therefore it is crucial that they collaborate with this team to get the latest information. “We cannot afford to be blindsided as we move vaccines and antibodies into clinical testing,” the lead author Dr Bette Korber, known for her work on HIV, said.

Because the paper has not yet been peer-reviewed, it has been published online on the server BioRxiv. However, the reputations of the scientists involved suggest that the findings are sound and must be taken with the utmost seriousness — the report is 33 pages long, and short on laughs. “This is hard news,’’ said Korber of the findings.


The scientists’ methodology involved running computer analysis of over 6,000 coronavirus DNA sequences collected from around the world. Although they remark that “observed diversity among pandemic SARS-CoV-2 sequences is low’’ there were no fewer than 14 different mutations in the Spike protein sequences, just one of which is the strain that has everybody worried.

This is the strain with the D614G mutation, which is probably causing the increased contagiousness. The mutation affects the ‘Spike proteins’ on the outside of the virus, which allow the virus to invade human cells. For this reason, these spikes have until now been the main target of those trying to design vaccines or antiviral drugs to combat the virus. There are currently at least 62 vaccines in development, and most of these are focused on the Spike proteins.

Although there is not really any good news here, this may not be as bad as it sounds. There is at present no suggestion that Spike D614G is any more deadly than the original. The British team calculated that people were no more likely to be hospitalized by it, although they did seem to have higher viral loads (more of the virus in their body).

But even if Spike D614G is not meaningfully different from the old strain, it does not mean that nothing has changed. The problems introduced by multiple forms of a virus have everything to do with immunity and vaccination. If a person had contracted and been ill with one strain, that would still be no guarantee of immunity to another. Epidemiologists could be left every winter having to guess what the commonest strain of coronavirus will be, as they do with the flu.

Furthermore, the development of a vaccine relies on designing the antibodies to match perfectly to the specific ‘Spikes’ on the outside of the virus. If these are mutated, any potential vaccine might not be specific enough to target that strain. Receiving the vaccine would provide no guarantee of immunity. This possibility is especially worrying to the study’s authors.


The authors have also been led to speculate that the wildly different outbreaks experienced in different regions could be down to different strains. Spike D614G hit Italy in early February, probably around the same time as the older strain hit there. Italy has been one of Europe’s worst affected countries.

And in America, just a few days after the first cases were reported in New York, Spike D614G was the dominant form there. Contrasting New York City with the relatively mild outbreak on America’s West Coast suggests that different strains could be at play. No matter what details transpire, it’s clear that in a world with multiple strains of coronavirus, developing vaccines or treatments is only going to get harder.