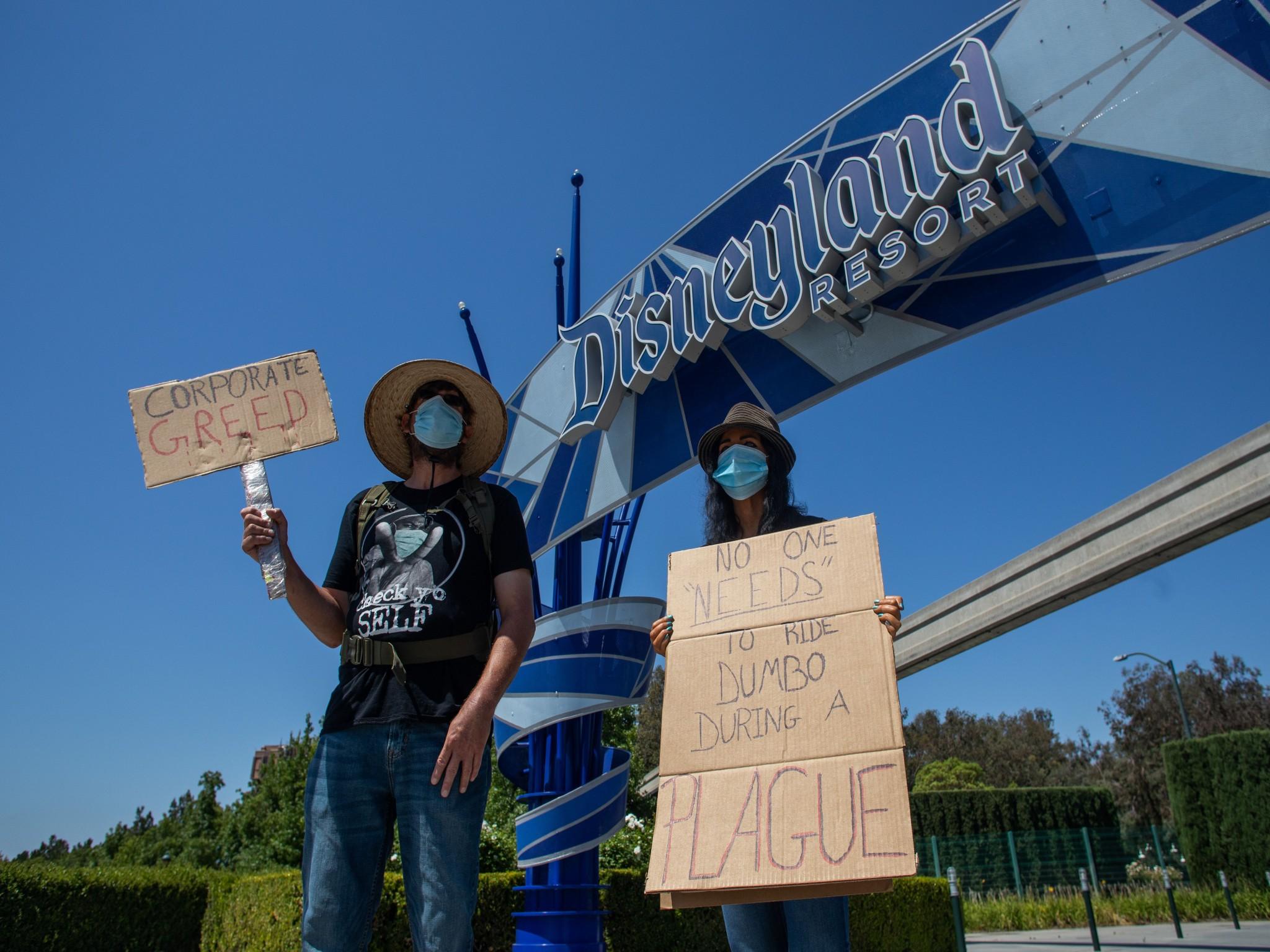 Only a few weeks ago, thousands of Southern Californians were flocking to beaches, Disneyland was announcing it would soon reopen and Whoopi Goldberg was lauding governor Gavin Newsom on The View for the state’s progress in combating the coronavirus. The worst, many in California thought, was behind them.

In fact, an alarming surge in cases up and down the state was only just beginning.

Over the past week, California’s case count has exploded, surpassing 200,000 known infections, and forcing Mr Newsom to roll back the state’s reopening in some counties. On Monday, he said the number of people hospitalised in California had risen 43 per cent over the past two weeks.

Los Angeles County, which has been averaging more than 2,000 new cases each day, surpassed 100,000 total cases on Monday, with the virus actively infecting one in every 140 people, according to local health officials. More than 2,800 cases were announced in the county on Monday, the most of any day during the pandemic.

More than 7,000 new cases were announced across California on Monday, its highest single-day total of the pandemic.

On Sunday, Mr Newsom shut down the bars in a half-dozen counties, including Los Angeles County and in the Central Valley, and recommended that another eight counties voluntarily close their nightspots and gathering places. On Friday, Imperial County, along the Mexican border, was told to return to a stay-at-home order. And Disneyland has since rescinded its decision to open its gates.

California was the first state to shut down and one of the most aggressive in fighting the virus. But the state that was so proactive in combating the spread of the coronavirus is now being forced to ask itself what went wrong.

“To some extent I think our luck may have run out,” said Dr Bob Wachter, a professor and chair of the department of medicine at the University of California, San Francisco. “This is faster and worse than I expected. You have to have a ton of respect for this thing. It is nasty and it just lurks and waits to stomp on you if you let your guard down for a second.”

On Monday, the governors of New York and New Jersey said they were reconsidering plans to allow indoor dining in the coming days because they were so alarmed by the rise in coronavirus cases in the south and the west.

The head start that California appeared to enjoy — the companies that allowed employees to work from home as early as February, the governor who warned residents in daily briefings to stay home and appeared to be listened to — was not protective enough in the long run.

Younger people appear to account for the large surge in new cases, as they have in many other states. Latinos, who make up a large swath of the state’s essential workforce, have also recently seen consistently high case counts.

And just as in Texas and Florida, the state’s reopening appears to have triggered a large resurgence. Pressured in part by businesses, church groups and conservatives, Mr Newsom ceded control of much of the timing of reopening to local officials who were eager to regain a sense of normalcy and stem economic losses. The result was a decentralized, haphazard process that sowed confusion and gave residents a false sense that they were in the clear.

Unlike people in the northeast, many Californians did not have a sense of urgency or immediacy towards the virus because infection rates had been so low for months. There were no overflowing morgues or ambulance sirens at all hours.

In a state with 40 million people, outbreaks have been heterogeneous: San Quentin State Prison on the San Francisco Bay, food-processing plants in the Central Valley, nursing homes, dense urban neighbourhoods filled with essential workers and family gatherings in remote rural communities have all accounted for clusters of cases.

But health experts and state officials say the ultimate reasons for the surge lie in the millions of individual decisions made across the vast state.

“A lot of people didn’t stick with the plan,” the mayor said in an interview on Friday. “The idea was, we would do a move, wait three weeks, check the impact, take the next move.”

State senator Richard Pan, a Sacramento physician who led the state’s push to tighten immunisation requirements, said that the state might have flattened its curve at first but that it never bent it down towards zero.

“How this disease spreads is all about the margins,” Mr Pan said. “All it takes is, like, 5 per cent more people doing more high-risk behaviour to change its direction.”

Mr Pan blames partisanship and misinformation spread by Donald Trump. On the weekend after 20 June, when bars reopened in Los Angeles County, an estimated 500,000 people visited nightspots. Additionally, half of the restaurants visited by county inspectors are not complying with new public health rules, according to health officials.

California was one of the earliest states to get hit by the virus. Soon after it first appeared on American shores, Silicon Valley, south of San Francisco, was considered a major hot spot, seeded by travellers arriving from China.

Counties across the Bay Area banded together to announce the nation’s first stay-at-home order on 16 March, followed by a statewide order three days later. Cellphone data showed that Californians moved around less than people in other states, and infection rates stabilised at a plateau well below the levels experts had projected, making military field hospitals and sports arenas and auditoriums — all mobilised in case of a shortage of beds — unnecessary.

By May, with low case counts remaining steady, Mr Newsom was coming under increasing pressure to reopen. Harmeet K Dhillon, a civil rights attorney and member of the Republican National Committee, filed more than a dozen lawsuits related to the reopening. If residents could congregate at Costco, they should be able to go to church, she argued. Elon Musk, the head of Tesla, railed that his Bay Area car factory was forced to shut and threatened to move the company’s headquarters out of California.

Mr Newsom localised the reopening process, allowing counties to move at different speeds, repeatedly declaring that “localism is determinative” and vowing to collaborate with county governments, not issue orders. Church congregations were allowed to meet with restrictions.

“I feel that our lawsuits were responsible for large sectors of California’s economy opening up much sooner than the governor originally intended,” she said, adding that she fielded countless calls from business owners. “People are absolutely devastated.”

But Mr Newsom was also criticised by those who worried the state was reopening too quickly.

The measures have become even more disparate in the past few weeks. In Napa and Sonoma counties, wine tastings and restaurant meals are permitted both indoors and outside. In San Francisco, restaurant dining is only available outdoors. Mayor London Breed of San Francisco announced last week that the city would postpone the reopening, scheduled for Monday, of hair and nail salons, massage shops, museums, tattoo parlours and outdoor bars.

Diana Dooley, a former state secretary of Health and Human Services who dealt with the Ebola and Zika pandemics during her tenure, said she had watched “with great empathy” as the crisis gripped California. Initially, she said: “It looked like the Bay Area was driving the decisions.” And as the virus spread, Californians were generally compliant.

“But after several months, the impatient people have made top-down orders very hard to enforce,” she said.

The result, she said, is a sense in some parts of the state of “a kind of liberty gone rampant”.

“You can only lead if people follow,” Ms Dooley said. “Mr Newsom has done a pretty good job of creating awareness, and people in California are more inclined to believe this is serious. But what they can do about it, we’re still getting to.”

David Townsend, a veteran Democratic political consultant in the state, said California’s size and political complexity pose a considerable challenge. Although the Legislature is overwhelmingly Democratic, more than a fifth of the electorate is Republican.

“You have the Inland Empire doing one thing, Los Angeles doing another, Orange County — it’s pretty hard to corral everybody in California and get them to do the right thing. It’s just so big.”

Mr Townsend said the pressure would be tough for any governor.

“How do you put the genie back into the bottle?” Mr Townsend added. “I’m not sure there’s much more he can do.”