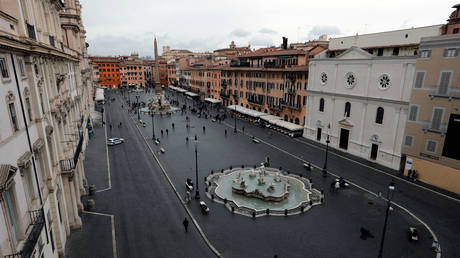 Italy will shut down most businesses across the country amid the fast-spreading coronavirus outbreak, Prime Minister Giuseppe Conte said, leaving only pharmacies, food markets and certain “essential” factories open.

Bars, hair salons, restaurants and all other businesses not necessary for production will be forced to close, Conte said in a televised address on Wednesday. The move comes as Rome steps up containment measures to combat the spread of the lethal coronavirus, including nationwide travel restrictions.

“We will only be able to see the effects of this great effort in a couple of weeks,” the prime minister said, later noting the new measures would come into effect on Thursday and remain in place until March 25.

Also on rt.com
First Brexit, then… CorExit? EU’s mild response to coronavirus epidemic could be the final nail in the coffin for European unity

Italy saw its deadliest day yet for the outbreak on Wednesday, reporting another 196 fatalities – an increase of over 30 percent – bringing the total in the country to 827, with nearly 12,500 confirmed cases. Over 2,000 new infections were reported in the last 24 hours.

Travel restrictions were extended from the northern Lombardy region – where the outbreak was first observed in Italy – to the entire country on Monday, after the total number of cases soared to over 10,000. The nationwide lockdown will require commuters to obtain permits to travel beyond their immediate quarantine zone, with a threat of jail time or fines for those who violate the new measures.

The usually bustling streets of major Italian cities, including tourist hot spots, were seen largely vacant this week amid the lockdown, as residents avoid public places and limit their contacts with others – with the exception of some storefronts, where customers have lined up in extended queues hoping to stock up on quickly diminishing supplies.

As health officials cope with new clusters of the virus across Europe, a number of countries have stepped up measures to contain and mitigate its impact, with the UK unveiling a £30 billion ($39 billion) economic stimulus package on Wednesday. Spain, meanwhile, has shuttered schools and universities for two weeks, while Hungary declared a state of emergency after 13 residents tested positive for the illness.