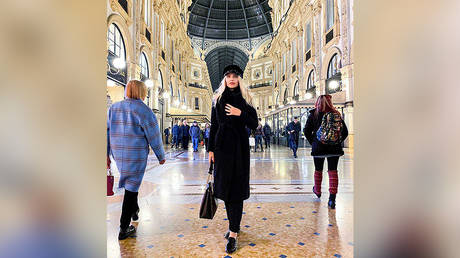 As the EU belatedly recommends member nations seal their borders, Italy is on the frontline of the fight against coronavirus. RT talked to a student in Milan who became a witness – and almost a collateral victim – of this fight.

Coronavirus cases outside China have surpassed those within the virus’ putative country of origin as Beijing’s tough quarantine restrictions are paying off. Italy has emulated elements of the crackdown, imposing a quarantine on tens of thousands of residents in the north, among other measures.

Weeks later, the EU itself has finally begun to relent on its quixotic ideals of ‘free movement’, with EC President Ursula von der Leyen recommending on Monday a one-month halt to all “non-essential” travel to the EU.

Meanwhile, the WHO has stepped up its insistence that countries keep on testing at all costs. Whether Italy’s high infection numbers (24,747 Covid-19 patients as of Sunday with 1,809 deaths) are merely the product of more zealous testing than its neighbors, or whether it has indeed been harder-hit, medical professionals are fighting to keep the virus in check.

Even as the hardest-hit nations teeter on the edge of chaos, the testing process represents a microcosm of order around which a cogent response to the recently-declared pandemic must be built.

A 29-year-old student at Catholic University of the Sacred Heart who fell ill in Milan told RT her story, shedding light on the sealed-off terrain of a system struggling – but still functioning – under ferocious challenges.

Maria Sheveleva tried to ignore her symptoms for several days before a temperature of 37.5C, a cough, and difficulties breathing forced her to reach out, she told RT on Monday. Her school had already cancelled classes, and she sought help from emergency phone numbers she’d been given – only to be told at first to “stay home, get treatment at home, you are young, even if you have the virus, you’ll get over it.” When she felt worse the next day, the same helpline told her to buy cough syrup at the local pharmacy, which she obediently did.

But Sheveleva only got worse. Feeling like she was “dying,” she called an ambulance, summoning hazmat-suited paramedics who checked her lungs and temperature (38C). Suspecting she did indeed have Covid-19, they took her to a clinic near her home. She spent five hours on an isolation floor with other suspected coronavirus patients, all outfitted with masks and gloves and instructed to keep a meter apart – mandates of order that were all but impossible to maintain in the crowded ward. Several were taken away when their tests turned up positive. When she admitted she was afraid to be around so many infected people, staffers reminded her they’d warned her not to go to the hospital due to the risk of infection.

Sheveleva stressed that she felt no ill will toward the clearly-overwhelmed hospital. “The doctors were really caring there, it was pleasant,” she said; medical staff even gave her food after taking her blood and X-raying her lungs.

“It’s not their fault that they have no space to keep people separated. They are good folks and doing everything they can.”

Also on rt.com
How likely are you (yes, you) to die from the Covid-19 virus?

But after three hours, she was told that while she had viral tracheitis, they wouldn’t take a swab to test for coronavirus, because her “condition [was] not bad enough.” She was instructed to self-quarantine for 14 days, to wear a mask and gloves when buying groceries because she might have Covid-19, and to only call the ambulance if her fever exceeded 40C or she experienced shortness of breath.

Sheveleva believes she was triaged to make way in the limited hospital beds for older and sicker people unable to breathe without help, but found their refusal to test her unsettling. She saw a 35-year-old man similarly sent home to self-quarantine without being tested, though he was obviously sick, while his 62-year-old sick mother tested positive and was kept at the hospital. The man believes he got the virus first and gave it to his mother, but since – like Sheveleva – he was not in critical condition, he was sent home to make way for sicker cases.

“Hospital beds are in short supply,” she reasoned, so it made sense not to keep her or the man there if there was no room, but why not test them for the virus? “We young people are the carriers… With us still out there we may infect more people. I don’t know why they are doing this,” she said.

I am still afraid I might have it now.