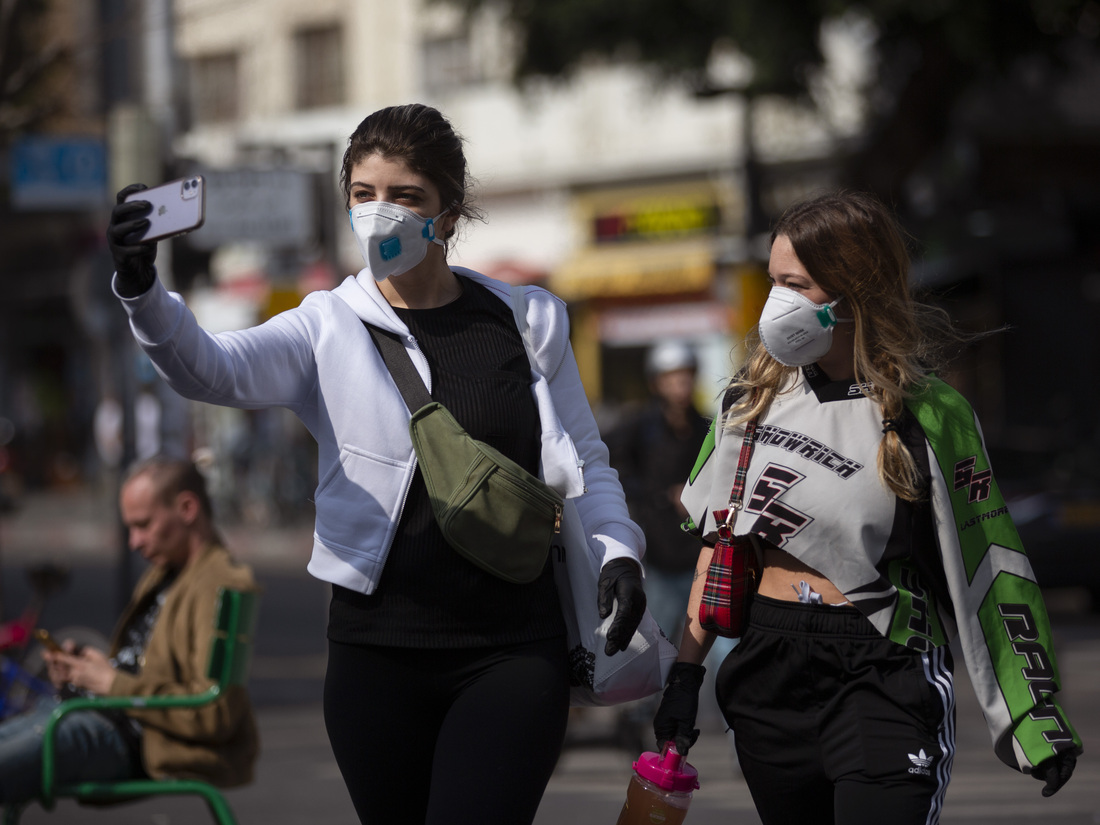 Women take a selfie as they wear face masks in Tel Aviv, Israel, on Sunday. ‏Israel has imposed a number of tough restrictions to slow the spread of the new coronavirus. Now the government is carrying out cellphone surveillance of people who may have come into contact with the virus. 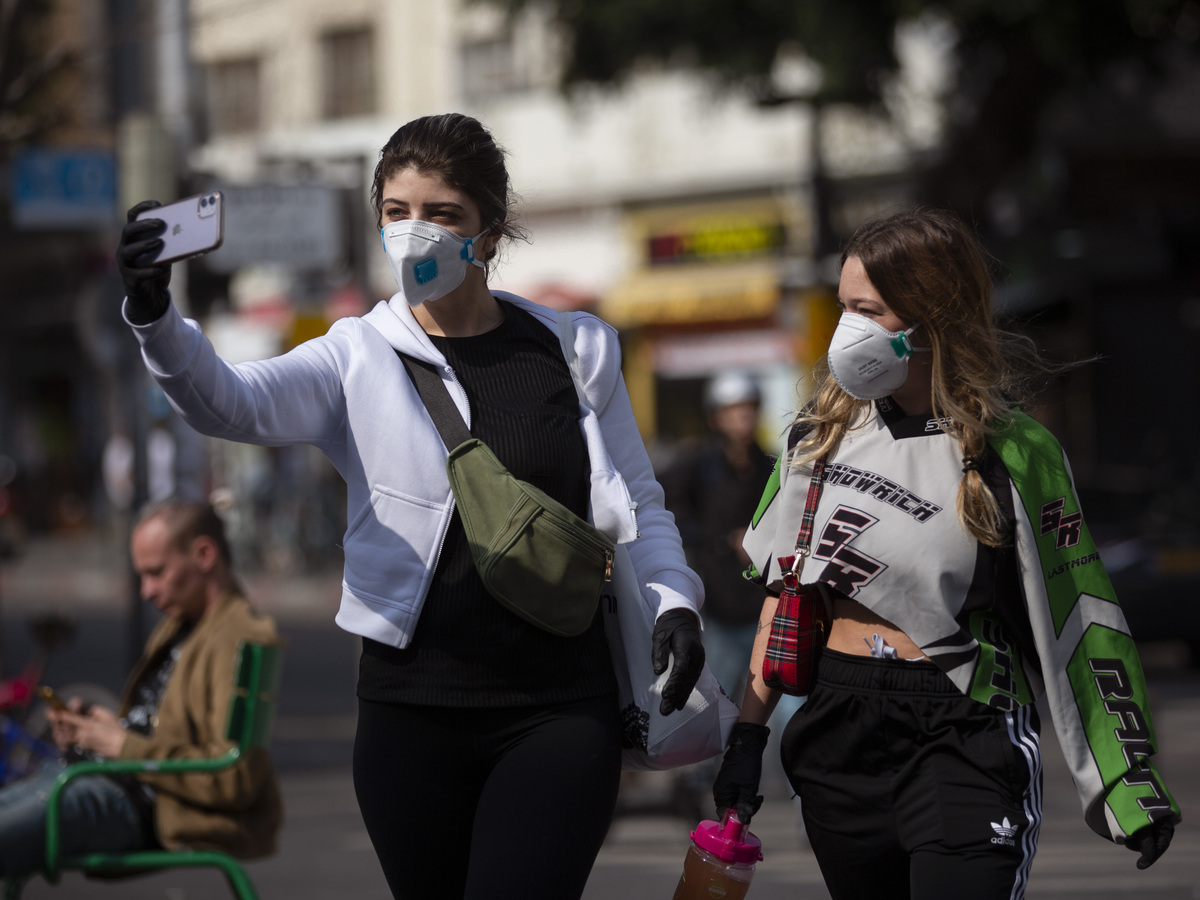 Women take a selfie as they wear face masks in Tel Aviv, Israel, on Sunday. ‏Israel has imposed a number of tough restrictions to slow the spread of the new coronavirus. Now the government is carrying out cellphone surveillance of people who may have come into contact with the virus.

Hundreds of Israelis were startled Wednesday by an unsolicited text message.

“Hello. According to an epidemiological investigation,” it began, addressing each recipient by name. “You were near someone sick with the coronavirus. You must immediately isolate at home [14 days] to protect your relatives and the public. … This information will be used only for this purpose and will be erased when no longer needed. Sincerely, public health services.”

It’s part of a sweeping new program. Prime Minister Benjamin Netanyahu ordered the country’s Shin Bet domestic spy agency, usually tasked with monitoring Palestinian and Israeli extremists, to launch the cellphone surveillance. It locates people who could have the virus and messages them.

Meanwhile, late Thursday Israel’s Supreme Court stopped the police from using the data to enforce quarantines, which it had started doing. The court also said it could scrap the program unless it goes through parliament or if the country is put on a total lockdown.

The court order appeared to be written before the government required people to stay at home, with some exceptions, late Thursday. It’s unclear how that will affect the future of the surveillance program.

With more than 600 cases and tens of thousands quarantined, the country has closed all schools, restaurants and entertainment venues.

The moves come as Netanyahu struggles to stay in power after an election March 2, which has so far failed to produce a winner. The opposition leader is trying to gather the votes in parliament to unseat him.

Small protests broke out Thursday — in defiance of emergency rules against gatherings — after the speaker of the parliament, a Netanyahu ally, shut down the chamber until next week. Police broke up the crowds.

The phone surveillance has added to the fears among some about the country’s democracy.

“Big Brother is here,” wrote Omer, a young father, on Facebook, minutes after he received a text message that he’d been close to a virus carrier the previous week.

“I guess I can understand why they’re doing it,” he said in an interview, withholding his last name due to, well, privacy concerns. “But it makes you think what other private personal information they have access to, and if it’s being used in the appropriate way.”

Michal Rudnik, 22, was recently driving her ill 20-year-old brother to the doctor when a police car pulled up next to her at a gas station in the southern Israeli town of Meitar. She was driving her father’s car, and her parents are in quarantine after returning from a trip to London.

She said the officer followed up by naming her father and asking if he was sticking to the quarantine. “I was in shock,” Rudnik said. “I guess in a way it’s also the right thing to do, but it wasn’t a good feeling.”

The country’s Health Ministry had already been publicizing the dates and times people with the virus had visited any locations, based on interviews. Now, officials use cellphone tracking going back two weeks and send the text messages to people who crossed paths with the virus.

Netanyahu’s Cabinet approved the surveillance measures in the middle of the night Monday, circumventing a parliamentary oversight committee still debating whether they were justified.

“I think that people in Israel in general are willing to limit their right of privacy to combat terrorism — Palestinians or other enemies,” said Gil Gan-Mor, an attorney with the civil rights group. “Now people find out that the Shin Bet and the police know exactly where they are in any second. People are awakening and understanding the problem of giving too much power to the government when it comes to our privacy.”

It’s likely that Israelis who were not within 2 meters (6 feet) of distance from a virus carrier will still be identified for quarantine. Sharon Perry, a cellular tracing expert, said the GPS technology of civilian mobiles can pinpoint a person’s location only within 5 to 6 meters’ accuracy if the cellphone is outdoors, or 10 to 20 meters if the phone is indoors. But he argued the breach of privacy was justified.

“In any case that someone can trace your route and location you should be concerned, but I guess that when you have a global pandemic happening in the world, there is a kind of justification for this move,” Perry said.

Alon Hazay, a cybersecurity expert who used to do work for a national cyberdefense initiative connected to Shin Bet intelligence, said the trove of cellphone location data could get into the hands of hackers, private investigators or criminal organizations. “When the data is out there then other parties can try to take advantage and misuse this information, and create a huge problem for privacy of the citizens of Israel,” Hazay said.

Anti-Netanyahu lawmakers — who are a slim majority in parliament following this month’s election — accuse caretaker Prime Minister Netanyahu of exploiting the coronavirus to barricade himself in office, harming Israel’s democratic institutions.

Netanyahu faces charges of bribery and fraud and his trial was supposed to start this week. But his justice minister closed down the courts, leading judges to postpone the trial.

“While I’m fighting the coronavirus war to save Israeli lives, giving my soul day and night, the opposition is trying to topple the prime minister who is navigating the boat during the corona storm,” he said in an interview to Israeli Channel 12 TV.