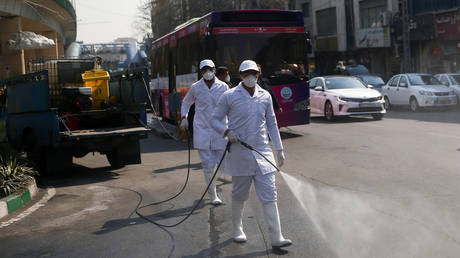 Iran’s effort to free up overcrowded prisons from non-critical inmates has seen 85,000 people going home for leave. The measure is meant to prevent an outbreak of coronavirus in the penitentiary system.

“Some 50% of those released are security-related prisoners… Also in the jails we have taken precautionary measures to confront the outbreak,” judiciary spokesman Gholamhossein Esmaili said, as cited by Reuters.

The number of people granted furlough has increased by 15,000 compared to last week. The Middle Eastern country reported 14,991 confirmed cases of the Covid-19 infection as of Monday, with the death toll standing at 853.

Keeping people out of prisons due to the threat of coronavirus is an approach taken not only by Iran but also by its archenemy the US, or at least some parts of it. The Los Angeles County Sheriff’s Department announced on Monday it has curbed daily arrests from 300 to 60 and reduced its jail population by more than 600.

Iran has been among the countries hit hardest by the pandemic, partially due to economic sanctions imposed by the US under its ‘maximum pressure’ campaign. Tehran is de facto barred from global markets and has to deal with shortages of medical supplies amid the outbreak.