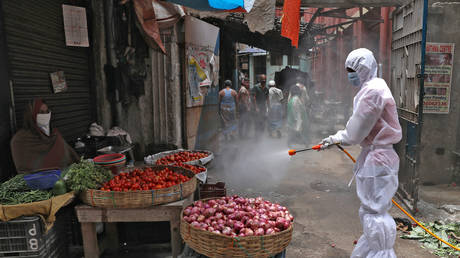 India has seen its largest ever one-day jump in Covid-19, both in terms of cases and fatalities, with 195 people succumbing to the illness in the space of 24 hours and 3,900 new infections.

The surge in India’s disease and death tolls came between Monday and Tuesday, bringing the total number of cases in the country to 46,433 and fatalities to 1,568, according to data published by the Health Ministry. Over 14,000 patients are in Maharashtra, which remains the worst-hit state.

Next to Maharashtra, Gujarat and Delhi are the next worst-affected states, counting 5,804 and 4,898 infections respectively, while Madhya Pradesh, Rajasthan and Tamil Nadu have also seen a steep rise in cases in recent days. Despite the spike, however, over 12,700 of India’s confirmed patients have since recovered, the Health Ministry said, putting the country’s overall recovery rate at around 27 percent.


Though India has been on a sweeping nationwide lockdown since late March – extended for a second time last week to end on May 18 – New Delhi and regional governments have permitted some shops to reopen before the quarantine measures expire. On Monday, liquor shops were reopened for the first time since March 24, almost immediately prompting a mass of residents to flock to stores around the country, disregarding social distancing guidelines still in place. In some areas, police reversed course, ordering the shops closed again due to the dense crowds they drew.

Kilometre-long queue, rush of customers in Delhi as liquor stores open amid lockdown 3.0Huge rush at Alcohol shops in India after some relief in lockdown areas.This step of government may prove disastrous. pic.twitter.com/48SrMRzYlV

Speaking optimistically at Monday night’s daily coronavirus briefing, the Health Ministry said the rate of new infections had slowed down across the country, noting that it took 3.4 days for cases to double before the lockdown, which has been extended to 12 days at present, suggesting the measures are having their intended effect.

“Our challenge now is how to further improve these results, to further increase doubling time,” Joint Health Secretary Lav Agarwal said at the briefing.