Athens, Greece – For most people living in crowded refugee camps on the Greek islands, following the measures recommended to prevent the spread of the coronavirus infection is just not possible.

In the Vial refugee camp on the island of Chios, even if they wanted to, people cannot keep a three-foot distance from someone who is coughing or sneezing, as the World Health Organization suggests.

It is also almost impossible to avoid gatherings of 10 or more people – a new Greek policy.

So far, no coronavirus cases have been reported among refugees and asylum seekers in Greece.

“But I see fear in everyone because of this new disease called corona,” Faramarz Hakimi, a 22-year-old Afghan who lives in Vial, told Al Jazeera via WhatsApp

“I see frustration on their faces because they cannot do anything.”

For the past six months, Hakimi has lived in a small hut with plastic tarp walls with his parents and two younger siblings. The walls of his neighbour’s hut are about two feet away.

Earlier this week, Hakimi had a fever and shortness of breath that left him unable to sleep.

His mother, father, and sister all became sick with the same symptoms shortly thereafter.

Hakimi says he described his illness to the doctors at the camp, and was given antibiotics and painkillers.

He does not believe he had COVID-19, but worries about what would happen if he did.

“They just returned me to my hut. Now do you think if there is someone with coronavirus there is a way to prevent this?”

To prevent the infection spreading in the camps, the Greek government announced a set of measures to restrict the movement of refugees.

For the next 30 days, residents of the island refugee camps will only be able to exit the camp between 7am and 7pm at certain hours to get food or other essential items from nearby towns.

Only one member of each family will be able to leave at a time. All visitors and nongovernmental organisations (NGOs) are also prohibited from entering the camps for at least 14 days, and new refugee arrivals will be subject to a temperature checks before entering the camp.

“Protecting public health at any cost, for the benefit of residents on the islands and in camps, is our priority,” Migration Minister Notis Mitarachi said.

But Doctors Without Borders (Medecins Sans Frontieres, or MSF), along with other NGOs, is calling for the camps to be urgently evacuated to avoid the pandemic spreading through vulnerable communities that already lack basic healthcare.

“Governments all over the world are telling people to isolate themselves, to stay home,” Peter Casaer, MSF’s representative on the island of Lesbos, told Al Jazeera.

Emphasising the necessity of social distancing and vigilant hygiene, he added: “The plan here and the decisions taken for these people is just the contrary.”

‘Our country is not an unfenced vineyard’

In the summer, Labour Minister Yiannis Vroutsis said asylum seekers and refugees would be forbidden from getting access to the national healthcare system, tweeting: “Our country is not an unfenced vineyard.”

In January, the government opened bids for a floating wall in the middle of the Aegean Sea to deter migrants from crossing.

Most controversial was its planned construction of closed migrant detention camps across the Aegean islands – a move that was met with weeks of protests and strikes by the islanders.

The government’s spokesman, Stelios Petsas, later said that the closed camps would allow for health checks needed to prevent the spread of COVID-19.

Greek Prime Minister Kyriakos Mitsotakis similarly linked refugees and migrants to the spread of the virus, announcing even tighter border controls in the interest of public health.

“An international campaign is beginning, in the languages of the nationalities that come to Greece,” said Mitsotakis, “with the warning that the country can no longer accept more illegal entries.”

Greece then published official guidance on the virus in English, French, Russian, Albanian, Arabic and Farsi. Currently, the largest outbreaks of the COVID-19 virus are in Italy and China.

The Greek Asylum Service did not respond to Al Jazeera’s requests for comment by the time of publication. 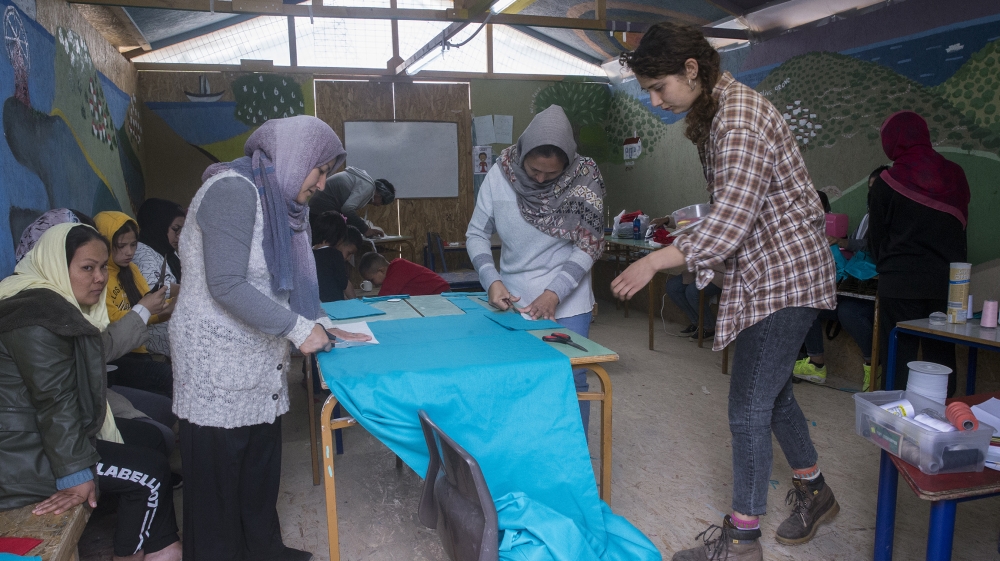 “I just pray that this virus does not enter the camp,” said Hakimi. “Because if it comes, the biggest crime will be committed by the EU government because it keeps people in these conditions where there is no safe place for anyone.”

Asylum seekers are often trapped on the Greek islands for months or years as they wait for their asylum applications to be processed.

The camps are all overcrowded.

Vial on Chios is one of the smaller camps, and holds more than 6,000 people in a space meant for 1,000. There are a total of 30 toilets and about one shower for every 200 people.

“Refugees and migrants on the islands are living in dire and crowded conditions, and there are inherent risks to their health,” said Boris Cheshirkov, the spokesperson for the United Nations High Commissioner for Refugees in Greece. “UNHCR has repeatedly alerted about the need to urgently improve living conditions there. Hygiene and sanitation, and access to health services are priority areas, but the overcrowding has been a serious concern for months.”

Back in Vial, Hakimi worries about his family getting sick, and about the further havoc the coronavirus could bring to the island.

“Only emptying the camp and moving refugees to a better place than the camp,” he says, “can prevent the virus from spreading.”