Manila, Philippines – The streets of Metro Manila, a megacity with a population of about 12 million people, were eerily quiet and empty hours after the government sealed off the city in a bid to contain the spread of COVID-19, the disease caused by the novel coronavirus.

The health ministry on Sunday confirmed 28 new coronavirus cases, bringing the country’s total to 140. A 13-year-old girl is reportedly the youngest person infected. There have been 11 deaths.

In the glitzy Makati commercial district, malls were devoid of shoppers. Servers outnumbered diners in restaurants that would normally be packed with families gathering for a meal after Sunday mass.

A corner coffeeshop posted shortened store hours and the barista, who declined to be named, said he was not sure if they would be open the next day. 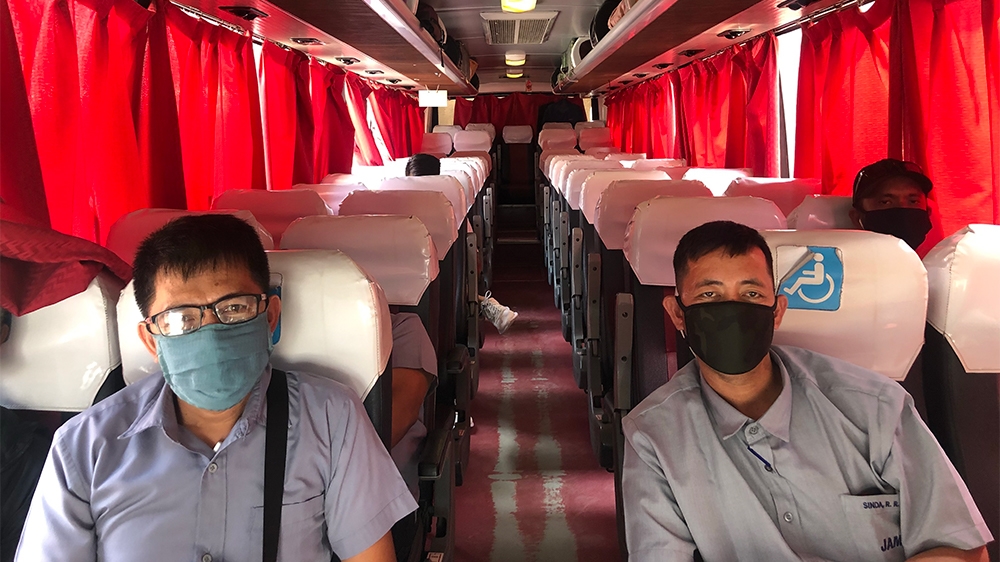 A handful of trains and buses were still running but were nearly empty.

“This COVID-19 is worse than a war. We are all affected. But the worst hit are our livelihoods,”
said taxi driver Bobric Caballo.

On a normal day, he makes about $50, which is substantially more than the minimum wage of $10 a day. These days, he is lucky if he can make $20. The pile of masks and can of disinfectant spray he now keeps in his cab are an added but necessary cost to protect himself from the virus.

“I give the masks to passengers who don’t have one. I wish I could douse the ones who come in here sneezing and coughing with alcohol, but that wouldn’t be polite,” said Caballo. 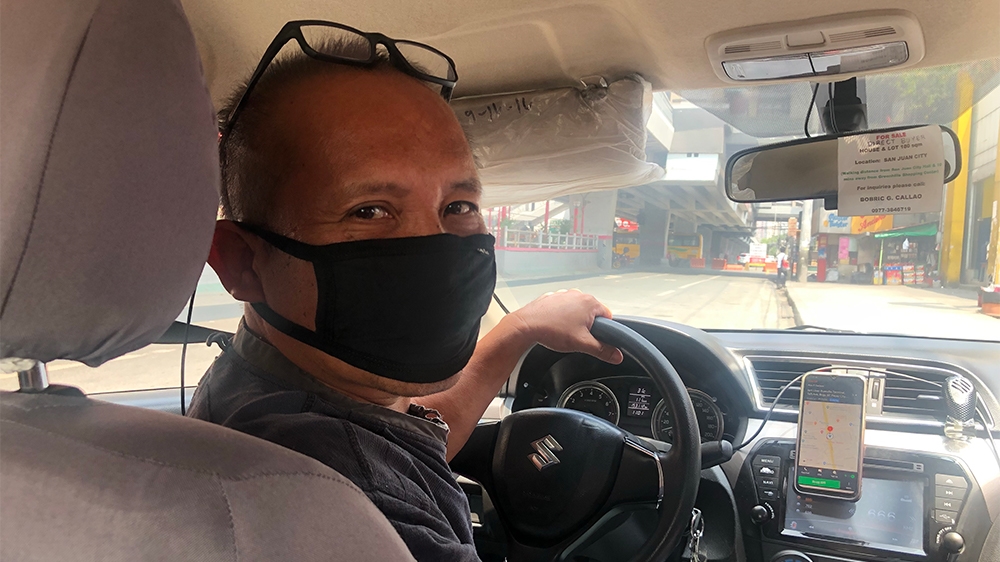 President Rodrigo Duterte addressed the nation on the evening of March 12 and declared a “community quarantine”. Domestic air, land, and sea access to the 17 districts of Metro Manila would be suspended from March 15 to April 14.

Checkpoints manned by the police and military would serve as border patrols, while classes would be suspended for one month. A curfew from 8pm to 5am would be enforced.

However, Duterte stopped short of calling the restrictions a lockdown of the country’s economic hub.

“We don’t want to use that [word] because you are afraid of a lockdown – but it’s a lockdown,” said Duterte in his televised address.

A total of 56 checkpoints have been set up blocking the entry points to the 17 districts that make up Metro Manila. The checkpoints are manned by police and military personnel who perform temperature checks on passengers.

Department of Interior and Local Government Under-Secretary Jonathan Malaya admitted the implementation of the government checkpoints is a “logistical nightmare” but “drastic measures” are needed.

So we were able to interview DILG Usec. Jonathan Malaya earlier on @ukgdos. Here are some answers you might be looking for about the Metro Manila quarantine/lockdown that’s happening on March 15.

At a news conference earlier on Sunday, Debold Sinas, head of the National Capital Region Police Office, admitted that only half the checkpoints have a thermal scanner.

“If there are still not enough thermal scanners, we will transfer the ones we have at our police stations to the checkpoints,” said Sinas.

The World Health Organization (WHO) had presented the results of a mathematical modelling exercise to the government that indicated a scenario where up to 70,000 COVID-19 cases could be seen in the Philippines.

“The WHO urges the Philippines to adopt all measures necessary to control the outbreak together – testing, isolation of cases, and social distancing,” said WHO Country Representative Rabindra Abeyasinghe.

“We just didn’t have that many confirmed cases before. But once there is community transmission, the cases started to ramp up. That is expected in any epidemic,” said Dr Edsel Salvana, an infectious disease specialist and member of the Inter-Agency Task Force on COVID-19.

The health ministry was largely criticised for its inaction and lack of transparency in its handling of the virus.

The country only has 2,000 COVID-19 test kits available, leading to fears that the total number of infections will remain undetected.

A local test kit developed by scientists at the University of the Philippines, which drastically reduces the turnaround time for testing, is still undergoing a two to three-week field test before it can be made commercially available.

Some citizens have criticised the “community quarantine” as a haphazard response that would only spread the virus to other parts of the country where health facilities are less prepared.

“With the mass exodus of people from Metro Manila in the last three days, we now have suspected cases on the rise in other parts of the country. The aim of the lockdown was to contain the epidemic in Metro Manila. What we need now is a national lockdown,” said public health advocate Benedict Bernabe.

Salvana, the infectious disease specialist, said the “exodus was foreseen and was the most contentious issue”.

“The two-day window [before the community lockdown] was a humanitarian response to give people – especially those with limited resources – time to go home to their provinces.”

Some people, like Cecille de la Cruz, could not get home before the March 15 start of the community quarantine. De la Cruz is from Batangas, about three hours south of Manila.

She had to borrow money for bus fare. “We need to get home to our five-year-old child because, in the coming days, bus trips may be reduced,” she said.

Her partner, Manuel Carpio, works as a company driver. He does not know if he will have a job when the community quarantine is lifted.

“My company just said they would ‘observe’ the situation and see how it affects them. I’m not sure what that means for me as an employee.” 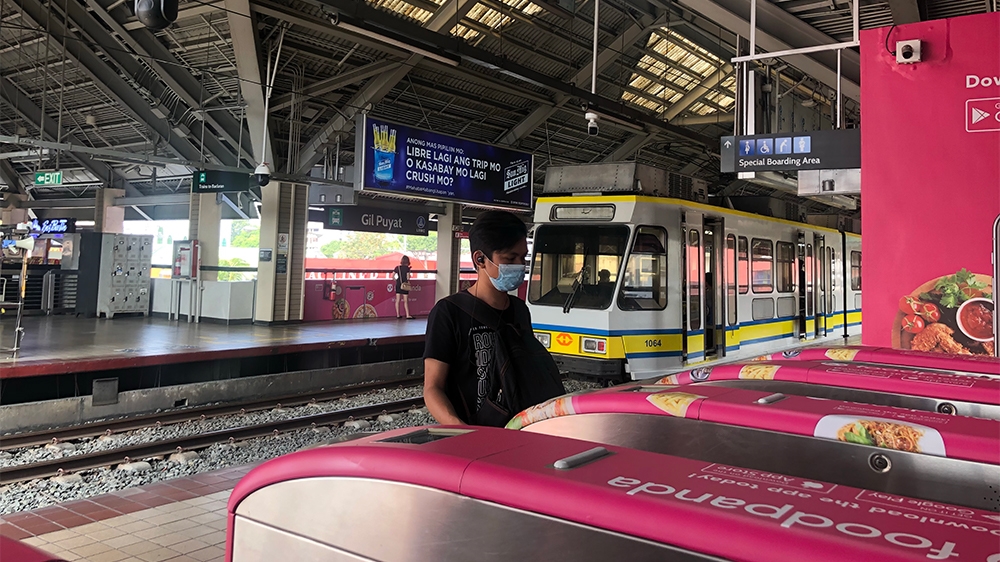 ‘They let the problem in’

Panic and confusion ensued in a high-rise condominium complex in the city of Pasig when a resident was confirmed to have been infected.

The patient was evacuated in an ambulance, and their family has been moved to an undisclosed location for quarantine. The panic turned to anger as building management began implementing policies the residents did not understand.

“We were told that there would be a strict ‘no mask, no entry policy’. Masks are already hard to come by so what will they do – prevent us from entering our own home?” said Chel Roa, who lives in the building with her husband and their 12-year-old son.

“I am very worried. This is an open community. Elevators, the gym, the pool and hallways are all shared spaces where we could have come in contact with this person,” said Roa.

Ryan Amandy, a 29-year-old resident, is frustrated. Looking at the global trends, he said it was only a matter of time before COVID-19 affected him. But still, he feels the government could have done better.

“Mostly, I resent the government for its slow response. Travel bans and quarantine should have all been done sooner. They just let the problem in, and now that problem is a pandemic.”