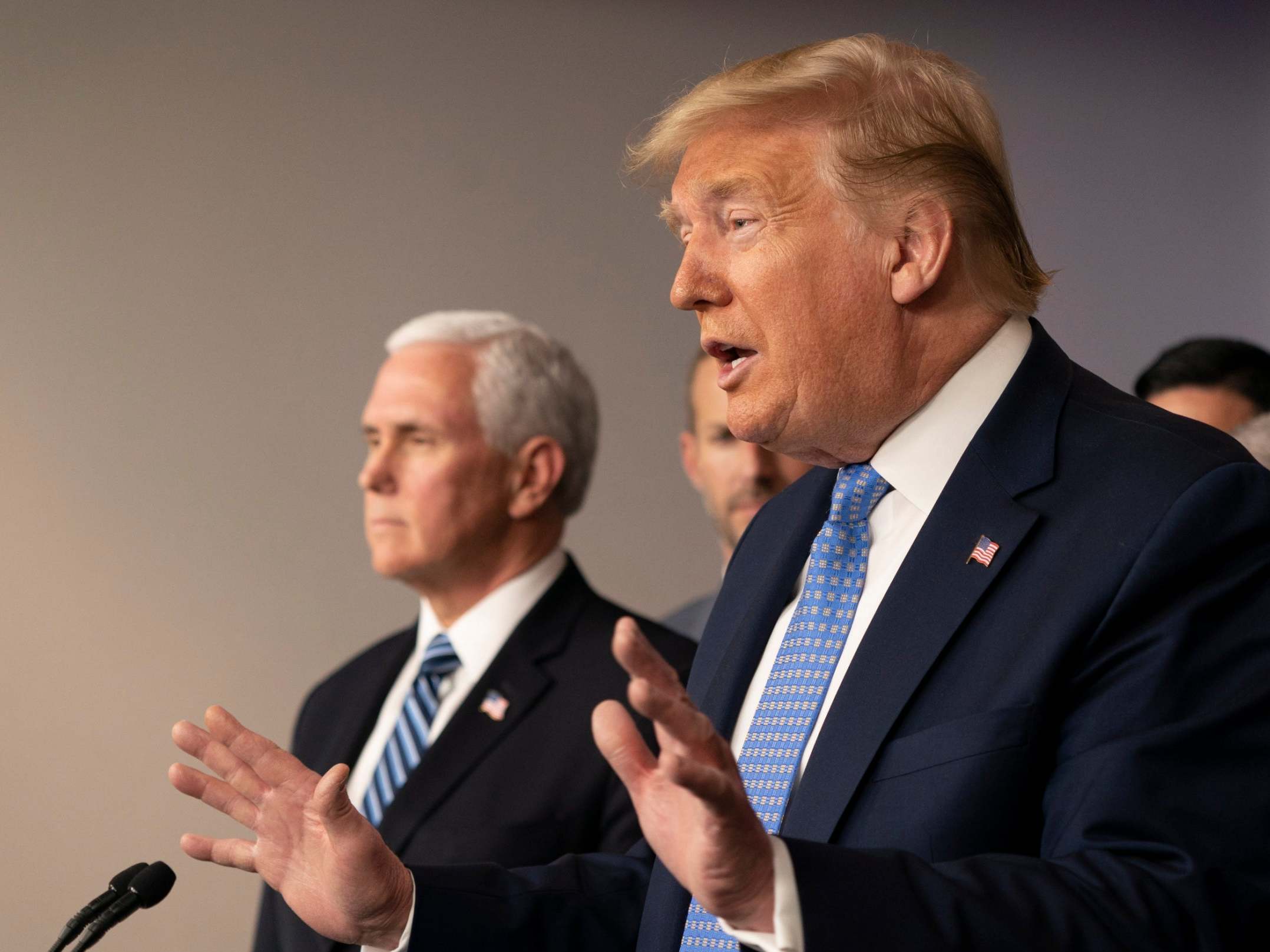 Fox News personalities such as Sean Hannity and Laura Ingraham accused the news media of whipping up “mass hysteria” and being “panic pushers”. Fox Business host Trish Regan called the alleged media-Democratic alliance “yet another attempt to impeach the president”.

But that was then.

With Donald Trump’s declaration on Friday that the coronavirus constitutes a national emergency, the tone on Fox News has quickly shifted.

On his programme on Friday, Mr Hannity – the most-watched figure on cable news – lauded the president’s handling of what the host is now, belatedly, referring to as a “crisis”.

“Tonight, we are witnessing what will be a massive paradigm shift in the future of disease control and prevention,” he said. “A bold, new precedent is being set, the world will once again benefit greatly from America’s leadership. The federal government, state governments, private businesses, top hospitals all coming together, under the president’s leadership, to stem the tide of the coronavirus.”

In all, it has been a complicated dance for a network whose hosts are among Mr Trump’s most ardent boosters and defenders – an increasingly challenging position to take as the crisis grew in magnitude.

Mr Trump, meanwhile, has long looked to Fox News and its personalities for guidance and approval, a dynamic that may have been pivotal this week after host Tucker Carlson reportedly visited with the president in person to urge him to take the coronavirus seriously.

Until then, Mr Trump’s allies on Fox News were inclined to take the same stance the president himself promoted for several weeks – that this coronavirus that had sickened and killed thousands of people in China was no worse a threat than the seasonal flu.

A week ago, Mr Hannity shrugged at the pandemic. “So far in the United States, there’s been around 30 deaths, most of which came from one nursing home in the state of Washington,” he said last Tuesday. “Healthy people, generally, 99 per cent recover very fast, even if they contract it.”

By way of comparison, he added: “Twenty-six people were shot in Chicago alone over the weekend. I doubt you heard about it. You notice there’s no widespread hysteria about violence in Chicago. And this has gone on for years and years. By the way, Democratic-run cities, we see a lot of that.”

Ms Ingraham, whose program follows Mr Hannity’s, also seems to have had a fast-dawning recognition that the social and economic dislocation of the virus was more than just a Democratic talking point wielded against the president.

She kept at it through last Tuesday when in front of a graphic reading “Trump confronts the panic pushers,” Ms Ingraham said, “The public in some ways seems a lot more levelheaded than the so-called experts. The facts are actually pretty reassuring, but you’d never know it watching all this stuff.”

Her advice: “We need to take care of our seniors. If you’re an elderly person or have a serious underlying condition, avoid tight, closed places, a lot of people, don’t take a cruise maybe. Everyone else wash your hands, use good judgment about your daily activities. Yeah, pragmatic thinking, especially if you’ve been overseas recently in one of the hardest-hit areas.”

In fact, health experts have repeatedly said everyone, not just “seniors” or the chronically ill, should avoid contact with other people, a strategy known as “social distancing”. Their advice extends to people everywhere, not just those who recently travelled abroad. (On Friday, Ms Ingraham tweeted that it was a “great time to fly if not in at-risk population!” The tweet was later deleted.)

By Wednesday, after Mr Trump announced a travel ban on people from the European Union, Ms Ingraham had started calling the pandemic “this dangerous health crisis.” She characterised warnings issued by National Institute of Allergy and Infectious Diseases head Anthony Fauci about the potential spread of the disease as “sobering and scary to hear.”

Ms Regan’s on-air speculation at the start of last week that coronavirus was merely another impeachment gambit for Democrats drew widespread pushback. The mood was changing at Fox by the time the network announced late Friday that her discussion-and-commentary program on Fox Business would leave the air indefinitely, to be replaced by newscasts. Fox insiders said Ms Regan is unlikely to return.

But they added that Ms Regan’s removal from air showed that only some hosts – those with the biggest ratings – are protected at Fox News. “If you put Trish’s comments up against Laura [Ingraham’s], you can’t honestly tell me that Trish is off the air” because of her coronavirus commentary, said a former Fox News executive who spoke on the condition of anonymity to speak frankly about his past employer.

He, too, blamed the “corrupt” media. But in a monologue that many took at an indirect scolding of the president, he also complained that “none of our leaders helped us to take it seriously. People you trust, people you probably voted for, have spent weeks minimising what is clearly a very serious problem. It’s just partisan politics, they say. ‘Calm down. In the end, this is just like the flu and people die from that every year. Coronavirus will pass, and when it does, we will feel foolish for worrying about it.’ That’s their position. But they’re wrong.”

Days earlier, Mr Carlson attended the birthday party of former Fox News host Kimberly Guilfoyle, who is dating Donald Trump Jr It was at the party, at President Trump’s Mar-a-Lago resort in Florida, that Mr Carlson spoke personally to the president, as first reported by The New York Times, and encouraged him to take the coronavirus outbreak seriously.

Meanwhile, his network has been a petri dish for misinformation about the disease.

In comments downplaying the pandemic on 7 March, Jeanine Pirro, who hosts a Saturday-night show on Fox News, offered, “All the talk about coronavirus being so much more deadly [than the flu] doesn’t reflect reality.” She reiterated Trump’s comment that the infection rate will drop “as the weather warms.”

The first statement is wrong; the second is unclear. Although the coronavirus’s mortality rate varies by country, early observations suggest it is 30 to 40 times as deadly as common flu strains. In addition, scientists are unsure whether warmer weather will slow the transmission of the disease, though it does in flu pandemics.

Then on Sunday, Rep Devin Nunes, R-Calif, appeared on Fox News and urged Americans to “stop panicking” and for those who are healthy to “just go out”.

Mr Nunes said: “There’s a lot of concerns with the economy here because people are scared to go out. But I will just say one of the things you can do if you’re healthy, you and your family, it’s a great time to just go out, go to a local restaurant.”

Mr Fauci and other specialists have urged people not to gather in restaurants, and several states have ordered the closure of bars, restaurants and food courts.

Anchor Maria Bartiromo offered no response to Mr Nunes’ comment. On Monday, a day later, Fox News contributor Nicole Saphier, a doctor, specifically called out the congressman on air to contradict his advice and told viewers to stay home.