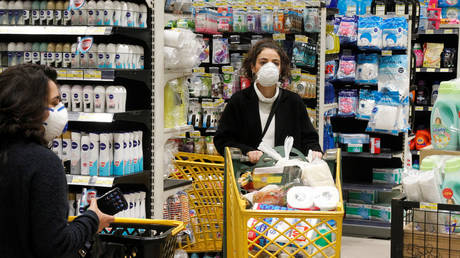 NSA whistleblower Edward Snowden, who knows a thing or three about keeping away from unwanted social contact, has weighed in on the latest technique suggested as a way to slow or stop the spread of coronavirus.

“Social distancing is underrated,” Snowden tweeted on Wednesday, as the practice made its way to everyone’s lips as the one potentially life-saving measure against the contagion.

As the World Health Organization finally gave in and declared a pandemic, pundits all over the West – where the virus that originally appeared in China is now rapidly spreading – are seizing upon “social distancing” as the way to slow the community spread and give hospitals some breathing room.

“The best way to prevent ‘community spread’ is to spread out the community. That means keeping people apart,” Max Brooks, author of a bestselling fiction book about the zombie apocalypse, argued in the New York Times.

In OpinionMax Brooks writes, “The best way to prevent ‘community spread’ is to spread out the community. That means keeping people apart.”https://t.co/wsOyrCLniC

No face-to-face contact, no handshakes, keep a distance from everyone, don’t go out in public – the outlines of the practice sound like an introvert’s dream.

Introverts are finally getting their moment. It’s called #socialdistancing … and here’s what it is in a nutshell.- Reduce face-to-face contact- Wave instead of shake hands- Give 6 feet of space from others- Don’t go out in public- Avoid medical settings pic.twitter.com/GlwdiDy39s

“Cancel everything!”urged pundit Yashar Ali, promoting a piece in the Atlantic by Yascha Mounk that advised canceling conferences and sporting events, shuttering schools and ordering employees to work from home. Presidential campaign rallies? Cancel those, too!

Former White House homeland security adviser Thomas Bossert agreed, adding that the virus was only contained in China and South Korea “because they took extraordinary measures” to enforce social distancing.

Governments in the West, from Europe to the US, have been reluctant to impose such measures for fear of their impact on the economy. Italy only turned to national quarantine this week, after it became clear the virus could not be contained in Venice and Lombardy in the north.

The irony here, obviously, is that the Chinese government was blasted by the very same outlets for doing just that, as imposing a “great cost to people’s livelihoods and personal liberties.”

To fight the coronavirus, China placed nearly 60 million people under lockdown and instituted strict quarantine and travel restrictions for hundreds of millions of others. Its campaign has come at great cost to people’s livelihoods and personal liberties. https://t.co/Awj873ZKdB

Wuhan and another dozen or so cities in China’s Hubei Province were placed under the strictest of quarantines shortly after the virus was first detected in December 2019. The number of cases, and fatalities, has dropped sharply in recent weeks, and is now being credited to these measures.

Only a small number of Covid-19 cases have so far been reported in Russia, where Snowden sought asylum in 2013 after revealing the existence of mass surveillance of Americans by the NSA, his former employer.