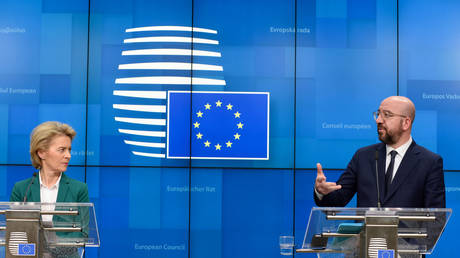 European Council President Charles Michel has announced that the EU’s external borders will be closed for 30 days to combat the spread of the coronavirus. It is up to member states to implement the ban.

“The EU and its member states will do whatever it takes to address the current challenges,” Michel announced.

European Commission President Ursula von der Leyen made the recommendation for the ban on Monday. “The less travel, the more we can contain the virus,” she said, adding that the idea received overwhelming support and member states would work on how to implement the ban individually.

Travel within the European Union’s 27 states will still be allowed, according to the new restrictions. Repatriation will be arranged for citizens of member countries, Michel said. Long-term residents, family members of EU nationals and diplomats, as well as essential staff – such as medical experts or healthcare workers – will be exempt from the ban.

It was also announced that fast-track lanes will be set up for freight trucks carrying goods like food or medical supplies, so they can avoid the massive wait times that have become common on the borders of countries like Poland, where coronavirus precautions have created bottleneck situations. Local media reports the lines have reached 50km (31 miles), with some waiting for hours for approval to cross. Tadeusz Kucharski, the head of the truck drivers’ union, described it as “one massive mess.”

Von de Leyen said the situation was a “big topic” when EU leaders were deciding on closing the external borders, but did not say if a solution was found. “It is absolutely crucial that we unblock the situation,” she said.

Though the virus was believed to have originated in Wuhan, China, the World Health Organization has deemed Europe the “epicenter” of the disease at this point, with countries such as Spain and Italy already in lockdown.

The EU’s move to close the external borders is likely an attempt to resolve the issue of member states responding on their own to the spread of the virus by walling off their own borders, creating internal pressure. Nathalie Tocci, an adviser to the European Union, recently told the New York Times that the “uncoordinated” closing of internal borders by countries “doesn’t help” efforts to combat the spread of the virus.