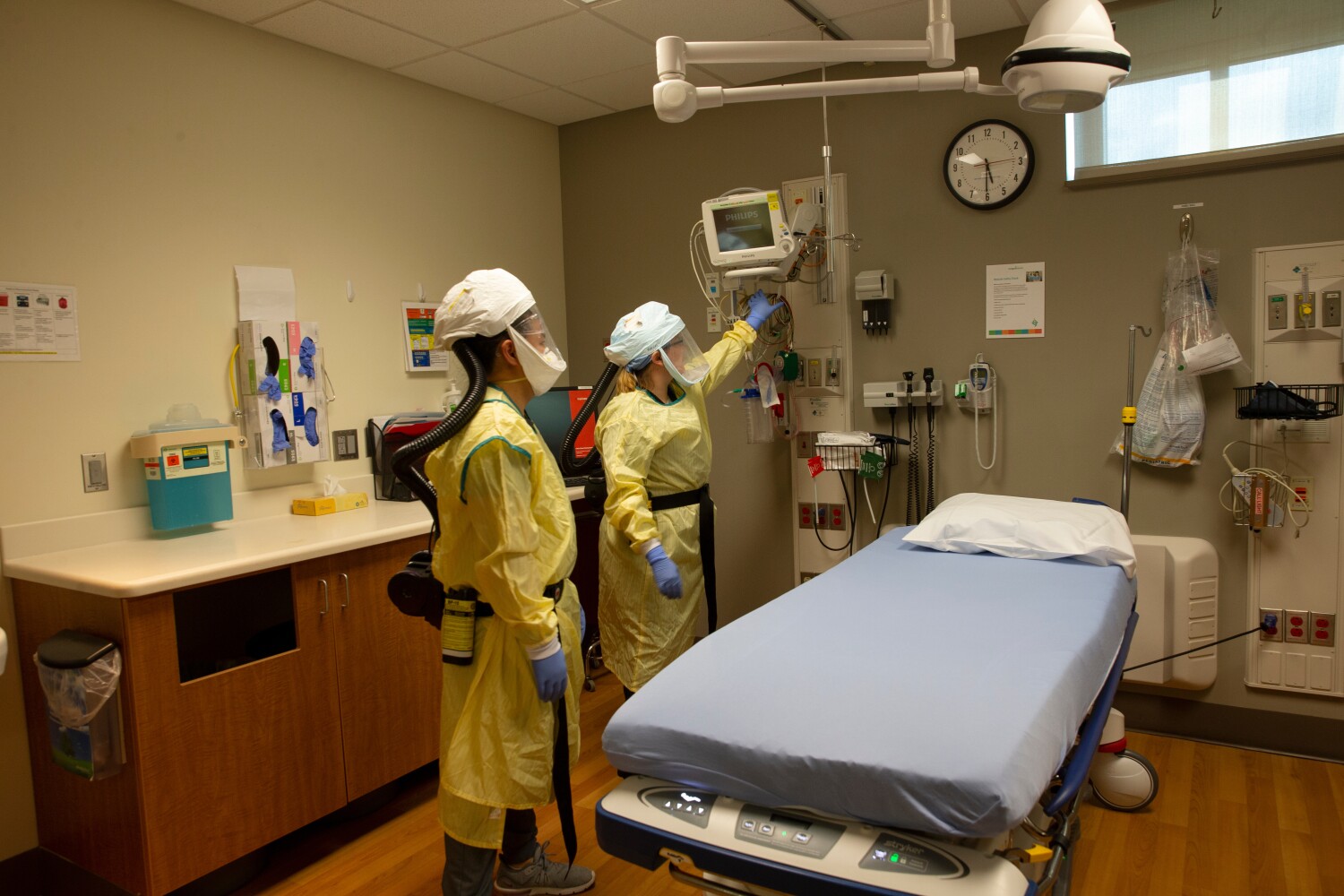 Three patients — a 16-year-old boy with diabetes, a 25-year-old mother and a 75-year-old grandfather — are crammed into a hospital triage tent and struggling to breathe. Only one ventilator is left. Who gets it?

This is the kind of wrenching ethical dilemma that critical-care doctors, nurses and medical officials across the United States are bracing for as cases of coronavirus surge and hospitals become overwhelmed.

Do they allocate intensive-care beds on a first-come, first-served basis? Do they pull one patient with a limited chance of survival off a ventilator to give it to another with better odds?

If two patients have equal medical need and likelihood of recovery, do they pick the youngest? Or the one with the greatest number of dependents? Should physicians and respiratory therapists, or even police officers and firefighters, be jumped to the front of the line?

With more than 13,000 Americans having tested positive for COVID-19, and thousands of new cases confirmed each day, health officials are hastily preparing for a barrage of critically ill patients that could force them to ration ventilators, intensive-care beds and antiviral medications.

“You only have so many negative pressure rooms or ventilators, so you have to start from an ethical standpoint: How do you prioritize?” said Dr. Virginia A. Caine, the director of Marion County’s public health department in Indianapolis.

“Should age play a role?” she said. “If I have a 75-year-old and I have a young mom with three children, there would be no one to take care of the children with the mom gone. But the 75-year-old has lived a good life.”

Agonizing decisions are already being made in Italy, where more than 3,400 have died as critically ill patients cram into hospital corridors and doctors turn their operating rooms into makeshift ICUs. Without enough ventilators to deal with the influx of patients, doctors are denying services to the elderly in favor of young and otherwise healthy patients.

“There is no way to find an exception,” a doctor in northern Italy told the New England Journal of Medicine. “We have to decide who must die and whom we shall keep alive.”

But the approach becomes more utilitarian in times of catastrophe. When systems are overrun during wars and natural disasters, doctors must decide how to maximize resources for the greatest social good.

“This is the largest experiment of social mitigation strategies and handling of a pandemic in human history,” said Howard Markel, a professor of history at the University of Michigan. “Historical epidemics don’t count because they didn’t have intensive care, respirators or intravenous fluids. We’re all flying by the seat of our pants.”

The U.S. has fewer than 100,000 intensive-care beds. But it would probably need a total of 200,000 in a moderate outbreak and 2.9 million in an outbreak akin to the 1918 Spanish flu, according to a report from the Johns Hopkins University Center for Health Security.

Even if critical cases were spread out over several months, the report said, “the mismatch between demand and resources is clear.”

“Everyone’s on red alert and gaming things out and saying, ‘What are we going to do if … ?’” said Dr. Matthew K. Wynia, director of the Center for Bioethics and Humanities at the University of Colorado

Last week, medical experts with the Italian College of Anesthesia, Analgesia, Resuscitation and Intensive Care published a report that raised the possibility of establishing age limits for admission to intensive care units.

Excluding the elderly from critical care in the event of a pandemic is not a new idea. Some clinicians have recommended denying critical care to anyone over the age of 85 should an influenza pandemic strike. But many ethicists say Americans would be less likely than European countries to introduce blanket age limits, viewing it as discrimination against the elderly.

Still, there is not consensus on how healthcare in the United States would be rationed in a pandemic.

Although the U.S. Centers for Disease Control and Prevention outlines general principles, it’s down to individual hospitals, health systems and states to decide policy. The result is a patchwork system. States including New York and Minnesota have drawn up detailed guidelines for allocating resources. Others have not talked about it much at all.

Bioethicists and hospital leaders across the country are now huddling online to formulate COVID-19 algorithms, brainstorm protocols and share policy drafts in hopes of ensuring fairness.

“We don’t want a situation where we’re putting bedside physicians in the position of making decisions patient by patient,” said Felicia Cohn, clinical professor of bioethics at the UC Irvine School of Medicine.

Laying out clear guidelines is also important for the public. The shift from routine to extreme emergency care during a crisis can be bewildering for patients who are denied care and families who are suddenly no longer allowed to visit or help make medical decisions.

“People are used to certain rights and privileges,” Cohn said. “In a public health crisis, the context changes completely. Rights we would normally have, we no longer have.”

In determining who should get treatment when resources are scarce, experts say the most pressing criterion is chance of survival: Who is likely to die and who can be saved?

More clinical guidance is needed to determine the odds that a coronavirus patient will recover, but new information is emerging. A recent study of infected adults in mainland China showed that older patients, as well as those showing signs of sepsis or underlying issues such as high blood pressure and diabetes, had a higher risk of dying.

Faced with a tiebreaker — how to allocate resources to people with a similar likelihood of survival — medical workers might turn to a secondary criterion: Who would have the most long-term benefit?

A third criterion might be: Are you a hospital worker who would go on to save additional people?

Some argue that people who are working to save lives, such as respiratory therapists or ICU clinicians, deserve higher priority because they are needed to get back to the fight and prevent additional deaths down the road.

Healthcare systems have long faced ethical questions about how to allocate limited resources.

“Organs get rationed every single day, and a lot of people die who don’t get a shot at a transplant,” said Arthur L. Caplan, the head of the division of medical ethics at NYU School of Medicine in New York City, which runs Bellevue Hospital.

And over the last two decades, a flurry of infectious disease outbreaks — SARS, H1N1 and Ebola — stretched resources and sometimes forced doctors to offer specialized treatment to only the most critical patients. Reports were filed and forgotten.

“The final act of most pandemics is amnesia,” said Markel. “We’ve had plenty of warning. This kind of a crisis has been talked about for at least 20 years. But we tend to all just go back to normal afterwards.”

Experts said that before forcing doctors to decide who lives and who dies, hospitals and governments must work to increase efficiency in a fractured U.S. healthcare system.

They could free up beds by postponing certain surgeries, sharing transportation, allowing doctors to cross state lines and practice anywhere in an emergency, waiving patients’ treatment costs and allowing hospitals for the military and veterans to take on civilian patients.

“The most unethical thing you can do is ration when you could have prevented it if you had better sharing and cooperation between institutions,” Caplan said.

The public can prepare, too.

Anyone who feels strongly that they would choose to sacrifice themselves for a younger person, or one with fewer health complications, could update their advance healthcare directive now, before it’s too late.

“It’s one of the things that has not really been talked about,” Wynia said. “If you would say, ‘Give it to the young person, I’m OK,’ you should be saying that now, while you can still speak.”