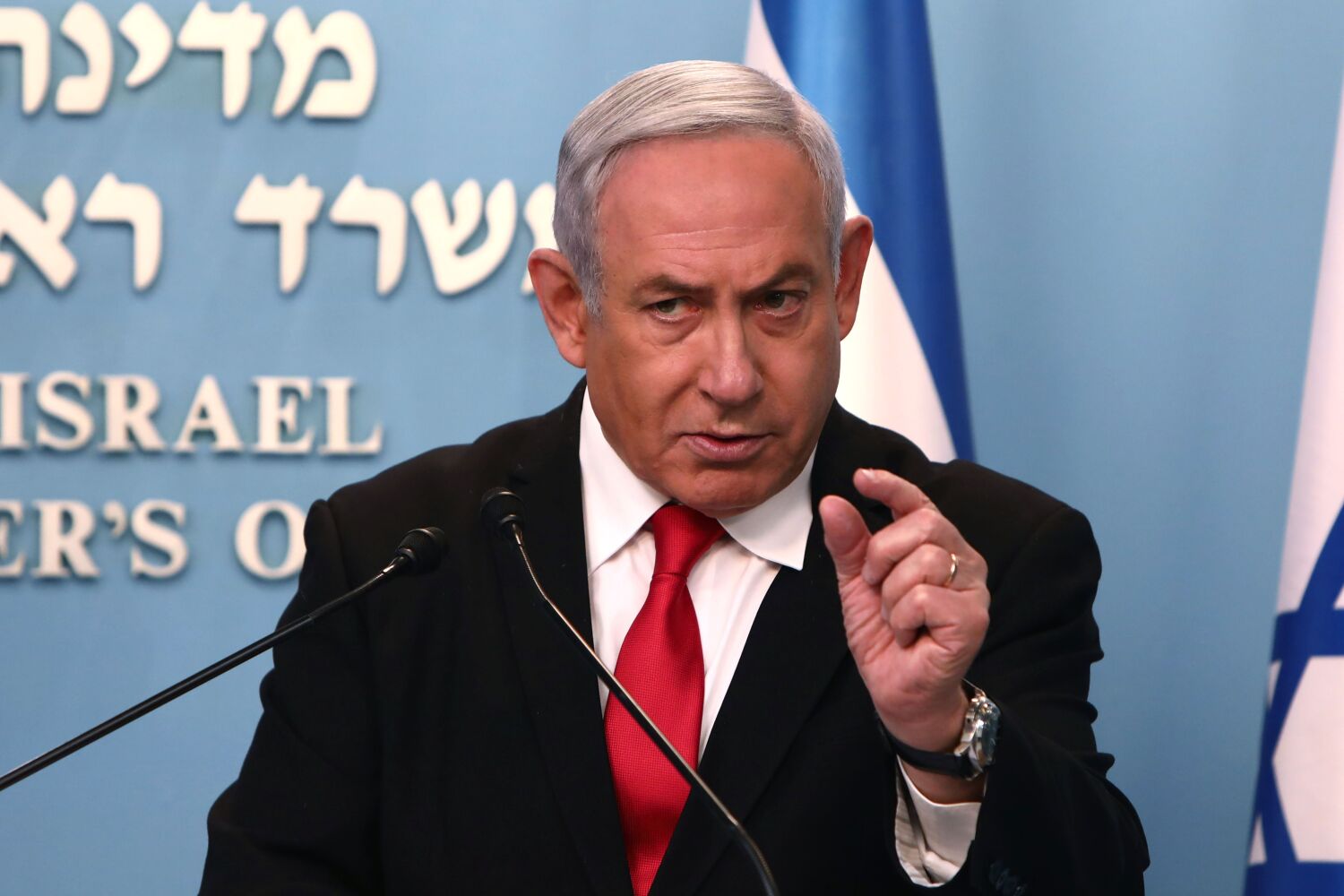 As he has every night since the beginning of the coronavirus crisis, Prime Minister Benjamin Netanyahu addressed Israeli citizens on Wednesday evening.

“Israel has been ahead of the curve from the start of it,” he said in a televised statement, noting that the country hasn’t recorded any deaths from the pandemic.

But Netanyahu may be ahead of the curve in another way: In only four days, he has shut down Israeli courts, ordered the internal security services to secretly track citizens using their cellphone data and incapacitated the nation’s parliament.

Legal experts say the measures — ostensibly taken to protect public health — is a power grab without precedent in Israeli history, including wartime, and may serve as an example to other leaders as the crisis unfolds.

One beneficiary of the shutdown of the judiciary, which was announced at 1:30 a.m. Sunday, was Netanyahu himself, whose trial for bribery, fraud and breach of trust was scheduled to open on Tuesday, and as a result of the measure was postponed until late May.

The decree instructing the Shin Ben, Israel’s security agency, to covertly access the phones of people diagnosed with the coronavirus, or those suspected of possible infection, was not made public. It had not even been seen by the ministers who voted for it before dawn on Tuesday, in a Cabinet meeting held by teleconference.

The measure went into immediate effect, and would normally be reviewed after two weeks. On Wednesday evening, 400 Israelis received text messages saying, “Hello, you were in close proximity to someone with corona.”

Netanyahu has served as a caretaker prime minister since December 2018, through three stalemated elections. The first two, in April and September 2019, left him and his top opponent, the centrist former army chief Benny Gantz, without sufficient parliamentary support to establish a government.

But following the third round, early this month, Gantz assembled a narrow majority of parliamentary supporters, and, in the worse political reversal Netanyahu has suffered in a decades-long long political career, President Reuven Rivlin on Monday tasked Gantz with forming Israel’s next government.

Israel’s legislators were sworn in on Monday, in an extraordinary ceremony demarcated by Health Ministry instructions prohibiting gatherings of more than 10 people.

Unaccompanied by family members or aides, the newly elected members of Israel’s parliament, the Knesset, came in groups of three into the plenum, where Speaker Yuli Edelstein rapidly led them in their vows.

On Wednesday, for the first time in the nation’s history, the will of a majority of the parliamentarians was stymied when Edelstein refused to convene the house, on the grounds that health guidelines prevented such an assembly.

In a speech Wednesday night, Gantz decried what he called the “unprecedented, anti-democratic attempt by Netanyahu and Edelstein to forcibly bring the parliamentary activity of the Knesset to a halt.”

“The world over, even in countries with thousands infected by the coronavirus, parliaments continue to function,” Gantz said. “Here, Edelstein and Netanyahu decided to simply blow up the rules and undo Israeli democracy. We will not allow it and will use all the tools we have to end this disgrace.”

In a phone call to Edelstein, Rivlin warned him that keeping the Knesset adjourned threatened “to harm our democratic system.”

“Especially when we are on an emergency footing, the Knesset plays a crucial role,” Rivlin told the speaker, and keeping it paralyzed “harms the ability of the State of Israel to function well and responsibly in an emergency.”

In a statement, Netanyahu said that “Blue and White wants to commandeer the Knesset to undemocratic ends.”

Alon Pinkas, who was a senior aide to former Prime Minister Ehud Barak, said that “under the guise of the COVID-19 crisis and the cover of a political emergency, Netanyahu, under three indictments and after a third successive failure to win election, is essentially usurping power, effectively shutting down the judiciary and suspending parliament.”

“This is not yet a flagrant coup d’état,” he told The Times, “but it comes very close.”

Elyakim Rubinstein, a former Supreme Court justice, said in an interview that the confluence of events presented a “clear danger to Israeli democracy.”

“These are not good days,” he said, “both because of the coronavirus and the almost inconceivable constitutional crisis.”

Proper judiciary and parliamentary procedure could have been upheld by using other emergency methods.

“In an emergency you wake someone up at any hour. They had enough time to convene the committee and get— or not get — authorizations. Even in an emergency, there is a correct way to do this,” Rubinstein said.

But Israelis seemed more concerned about international and domestic developments regarding the coronavirus than about the institutions of state.

“Democracy and rule of law is second place to people who are afraid of a real and unprecedented global crisis,” said Dan Meridor, a former justice minister for Netanyah’s party, Likud. “There is talk of thousands of dead.”

Using Netanyahu’s nickname, he said, “Bibi didn’t initiate the corona crisis, but he’s using it to his benefit. It is a terrible situation, and he should be acting differently. In his place, I would not have allowed my own trial to be postponed. Anything but that. After three elections he should resign — and defend himself at trial.”

Gershom Goremberg, an historian and the author of “The Unmaking of Israel,” a book on the crisis of Israeli democracy, tweeted that “the only recorded death so far in Israel from this virus was the already aging, highly vulnerable democracy.”

In an interview, he said he remained hopeful that “tomorrow the Supreme Court will order the speaker to convene the Knesset,” but said that in his view, Netanyahu was openly attempting “to evade the outcome of the election and stay in power.”

There have been indications that the Likud may still challenge the election’s result. David Bitan, who represented the party on the national elections commission, refused to ratify the final vote count.

“Not accepting the rules of the democratic game is a very negative development,” said Mordechai Kremnitzer, a Hebrew University professor of constitutional law and vice president of the Israel Democracy Institute.

“It is an attempt to stay in power as long as possible, to prevent Gantz from forming a government and an exploitation of the health crisis to advance the project of a national unity government established under conditions beneficial to Netanyahu.”

In an interview, Kremnitzer said, “The corona crisis creates opportunities that we are seeing became reality, in which the Knesset and the courts are hampered, and it could bring us to an executive with unfettered power — it is a very big danger.”

Tarnopolsky is a special correspondent.