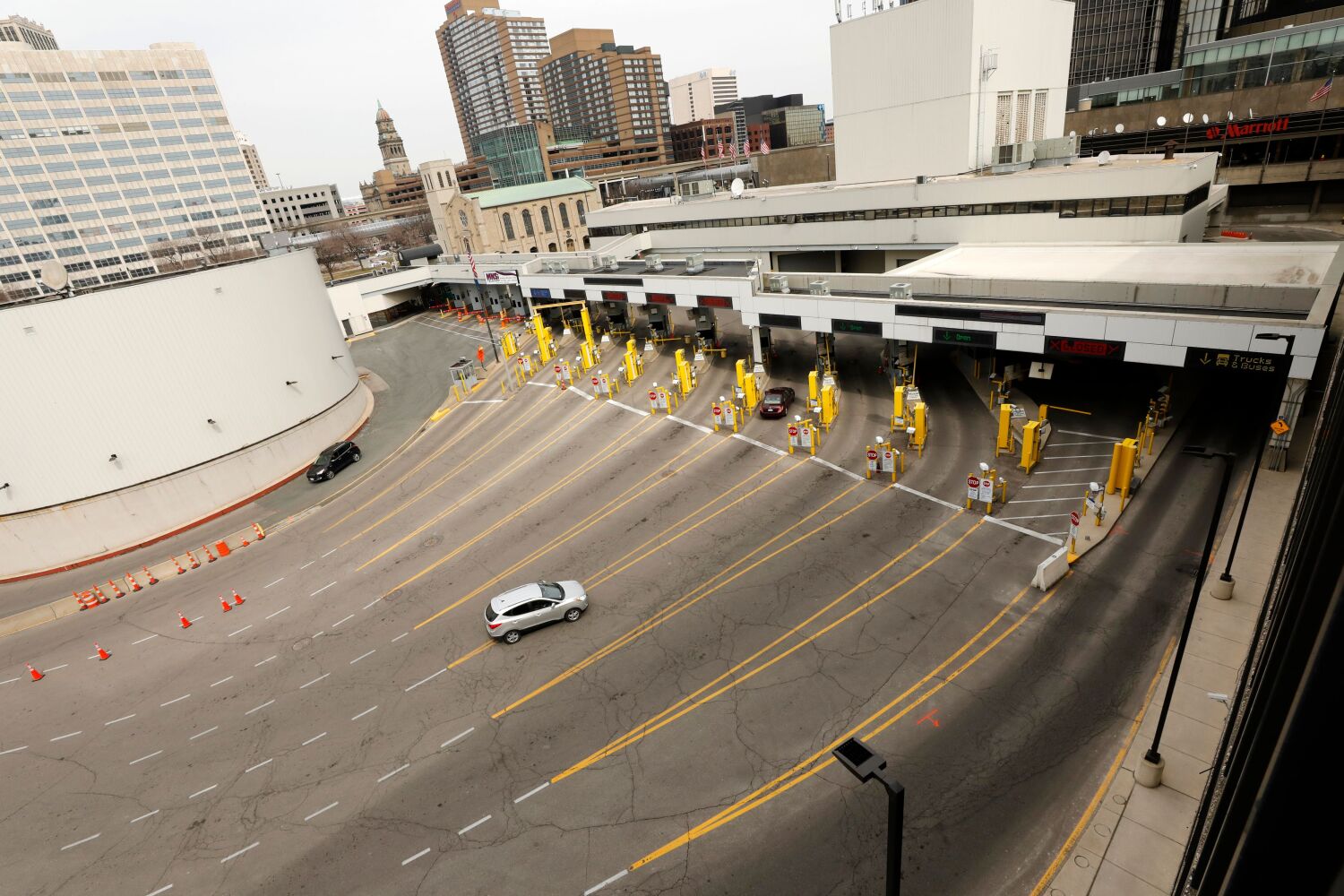 Canada and the United States announced the temporary end of “nonessential travel” across their 5,500-mile border — the world’s longest land boundary — between two countries that have immensely intertwined commercial, cultural and family ties.

The action, agreed jointly by President Trump and Canadian Prime Minister Justin Trudeau, comes as both nations tighten restrictions to battle the coronavirus threat that has registered 7,400 cases in the United States and just over 600 in Canada.

“In both our countries, we are telling our citizens to stay home,” said Trudeau, who described the border restrictions as “an extension of that prudent approach.”

Trudeau offered no time limit for the restrictions, but in a separate appearance in Washington shortly after the prime minister’s remarks in Ottawa, Trump raised the possibility that they could be removed after 30 days when, he said, “we’d be in great shape.”

Trump said the measures “won’t affect trade at all” but said “we don’t want people coming into contact, because that is how we are going to win this war.”

The new measures, initially announced in the U.S. by Vice President Mike Pence, apply primarily to tourism and to shopping trips.

But they injected uncertainty in communities hugging both sides of the border, where international trade is a way of life, where people sometimes cross borders multiple times a day, and where family and friendships pay no mind to international barriers. An extreme but symbolic example is the Haskell Library, constructed in 1905 and sitting partially in Stanstead, Quebec, and Derby Line, Vt. The books are in Canada but the entrance is in the United States.

Both Trump and Trudeau emphasized that the trade that accounted for $718.5 billion (U.S.) in 2018 would not be substantially curtailed. Indeed, Trudeau said that the health of Canadians depended on a healthy trade relationship that kept food and medical supplies flowing across the border.

Some 200,000 people pass through the 119 border stations a day. Canada is California’s second-largest international trading partner, accounting for nearly $17 billion last year, about a tenth of the state’s total exports.

“Our economies and our people are so interconnected in so many ways,” Trudeau said in his remarks outside Ottawa’s Rideau Cottage, where he has withdrawn since his wife contracted the virus. “We will work in close collaboration,” he continued, to assure that trade between the two nations continues.

The ability to go back and forth across the border has shaped the cultures of both countries. “The two share a common culture, a common outlook and, in this case, a common danger,” said Robert Bothwell, a University of Toronto professor and author of “Your Country, My Country,” a joint history of the U.S. and Canada published in 2015. “The important thing is that we share a common approach.“

Some 44 million people cross the border a year, half of them on one-day visits, often with Canadians seeking American goods or visiting outlets such as the Trader Joe’s grocery stores, and Americans seeking inexpensive European-style goods in a country where the exchange rate for the Canadian dollar now has dropped below 70 American cents.

A favorite Buffalo diversion is to cross the border to enjoy a cold Canadian beer on a summer’s evening or to sample the superb Chinese food at the Ming Teh restaurant in Fort Erie, Ontario. A Fort Erie veterinary clinic has several American pets among its patients.

And some of those border crossings reflect century-long traditions, particularly at the Peace Arch crossing between Blaine, Wash., and Surrey, British Columbia, where on a slow day there are 3,500 crossings a day; and at the Peace Bridge between Canada’s Niagara Peninsula and Buffalo, where in January alone there were 339,011 crossings, including 921 buses.

“Crossing the Peace Bridge for me has been no different from walking down to the corner,” said Erik Brady, an American whose family has owned a cottage on Lake Erie for more than 100 years that cousins now share for summer retreats. “The idea that after all these years none of us can go is something that we could not ever have imagined.”

Shortly after the Trudeau-Trump announcement, there was a 10-minute delay to cross the Peace Bridge and no delay to make the Peace Arch crossing. The flow of trucks at both crossings was virtually unimpeded.

“Traveling on business is central to what keeps the wheels of business oiled and turning,” said Karl Moore, who teaches at the Desautels Faculty of Management at Montreal’s McGill University. “Video conferencing can help, but in-person contact is vital in the medium to long term.” He added that disruptions in the airline, hotel and other businesses “will undoubtedly tip Canada into a recession.”

The border announcement came as Trudeau introduced massive new economic measures to fight the virus. “No matter where you live, what you do or who you are, you will get the support you need at this time,” the prime minister said. “In Canada, public health should never hinge on financial considerations.”

The Trudeau US $56-billion initiative would, among other provisions, provide a financial supplement every two weeks for 14 weeks to Canadians without unemployment insurance and who must stay home, who fall ill, who are in self-isolation or who have to look after family members afflicted with the virus. He also unveiled a temporary subsidy for some businesses equivalent to 10% of wages for three months “to encourage employers to keep workers on their payroll.”

In addition, low-income Canadians will receive checks for up to $241 per adult and up to $103 (U.S.) per child, beginning in May. Trudeau also announced new farm assistance and a moratorium on student loan and mortgage payments.

“Our government,” he said, “is prepared to do more.”

Additional adjustments in daily life continued to spill across Canada, with WestJet, next to Air Canada the country’s largest carrier, saying some of its passengers have been exposed to the virus and urging passengers on 14 flights, including one from Las Vegas to Edmonton and another from Phoenix to Toronto, to go into self-isolation. Toronto-based Porter Airlines, a vital trade link for business executives with its flights into Billy Bishop Airport on an island in Toronto Harbor, said it would temporarily cease operations at the close of business Friday.

But for many people in the 13 states and eight provinces that share the undefended border between the two countries, the most jarring element was the travel restriction imposed as part of what Trump called a battle against an “invisible enemy.”

“I worried that this was coming,” said Rosanne Stefani, a retired Toronto teacher whose daughter is a lawyer in a Pittsburgh firm. “I’m worried that I won’t be able to see Allie or have her come home. There’s a lot of uncertainty in a time that’s already very difficult.”

Many countries in Latin America and Africa are also restricting outside travelers, further limiting the flow of people from the United States and elsewhere and curtailing the global economy that has developed over the past half-century of easy air travel.

The Trump administration is negotiating with Congress on a stimulus bill that could exceed $1 trillion, with a large portion devoted to the airline industry, one of the most battered segments of the economy.

Shribman reported from Montreal and Bierman from Washington.