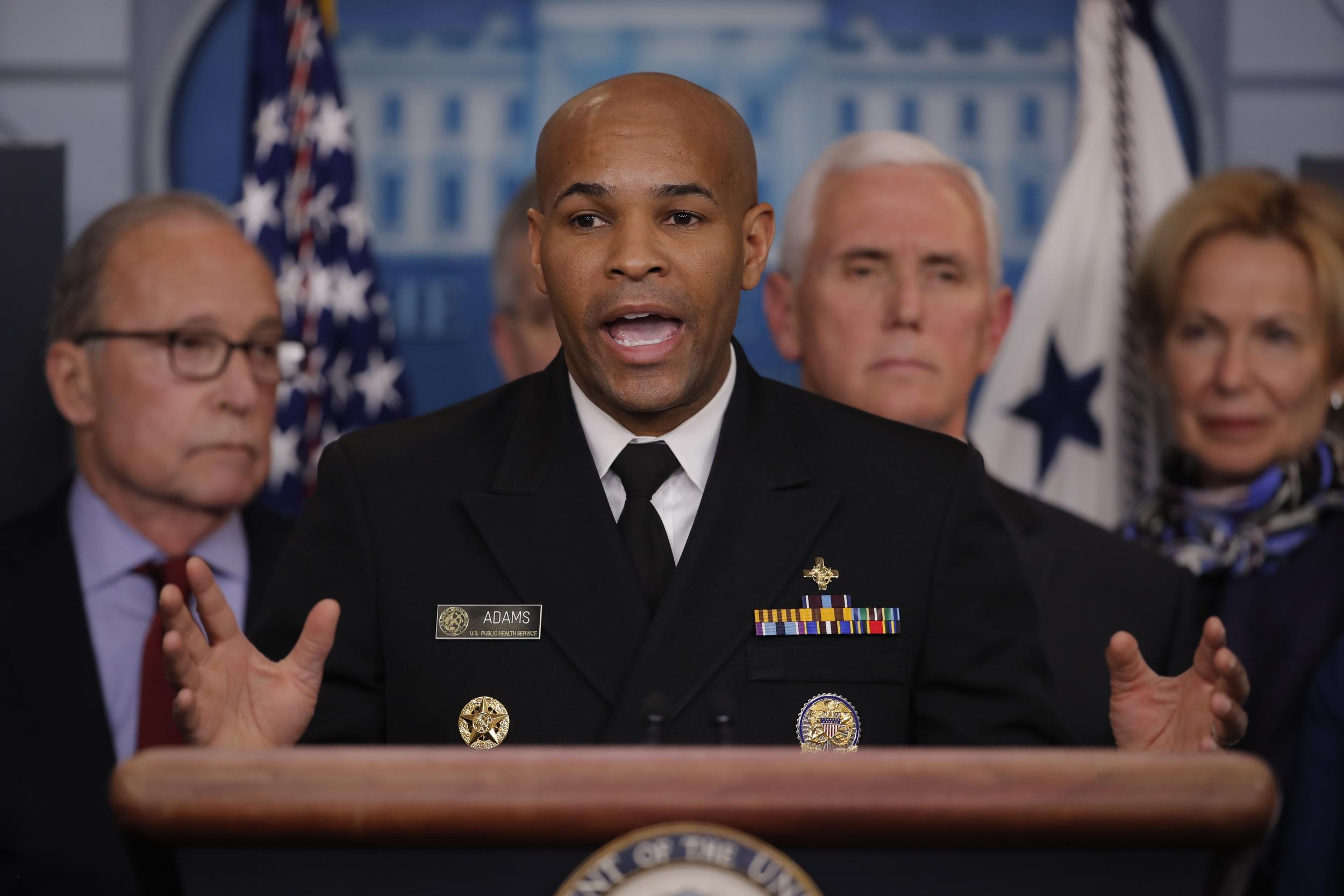 The US Surgeon General has said he was wrong to compare coronavirus to the flu in a tweet from just two months ago, as the nation’s top health official faces criticism on Twitter over objectivity and professionalism in the face of the pandemic.

Broadcaster Soledad O’Brien called out Jerome Adams by quote-tweeting a post from 1 February in which he wrote: “Roses are red, violets are blue, risk is low for #coronarvirus, but high for the #flu. So get your #FLUSHOT!”

On Sunday, he replied: “Ma’am: you’ve met me. You know I always try to give the best information I can based on the best available evidence.”

He said that “circumstances change but was a true statement at the time it was made” when roughly 20,000 people had died from the flu.

But she pushed back at his claims, saying: “Sir: you are a medical professional and a public health professional. Your job is not to suck up to the President of the United States, but [present] factual information.”

She said the surgeon general calling the president “healthier than what I am” was “obviously untrue” and works to “undermine the public trust.”

He replied: “I don’t want to get into a distracting back-and-forth but I respect your advocacy and I’ve said this publicly … I have heart disease, asthma, am pre-diabetic, and spent a week in the ICU for a heart condition. I shouldn’t have compared, but please don’t presume about my health.”

Other White House officials, including Donald Trump, also compared the virus to the flu at the time, as recently as within the last several weeks, in press briefings and at rallies in front of thousands of people.

Those claims were echoed in the media and by pundits defending the administration’s response.

On 31 March, the president admitted for the first time that Covid-19 is “not the flu” and said it’s “vicious.”

The surgeon general has also been criticised for contradictory instructions for Americans to wear masks in public to prevent the spread of the virus.

On 29 February, the surgeon general urged people to “stop buying masks” and said they’re “not effective” to prevent transmission.

In an interview with Fox & Friends a few days later, he said: “You can increase your risk of getting [Covid-19] by wearing a mask if you are not a health care provider … Folks who don’t know how to wear them properly tend to touch their faces a lot and actually can increase the spread of coronavirus.”

On Friday, the surgeon general admitted that his reversal “has been confusing to the American people” as the Centers for Disease Control and Prevention issued new guidance telling Americans to wear non-medical face coverings in public, amending previous statements that doing so would likely be ineffective at slowing transmission.

The next day he shared a video instructing people how to make homemade masks using T-shirts.

Mr Adams also appeared on Fox News on Sunday to warn Americans to prepare for the “hardest and saddest week” as quarantine efforts have been put in place for most of the country and hospitals brace for a potential surge in new patients.

He also urged governors to tell residents in their states to stay at home as much as possible, absent a national stay-at-home order at the federal order that the president has said he does not intend to issue.

The latest criticism follows growing concerns about the administration’s response to the outbreak and the president’s repeated attempts to downplay its impacts.

Within a month, the president claimed the virus would “disappear” with infections going “down to zero” before admitting the crisis would be “the worst thing the country has probably ever seen.”