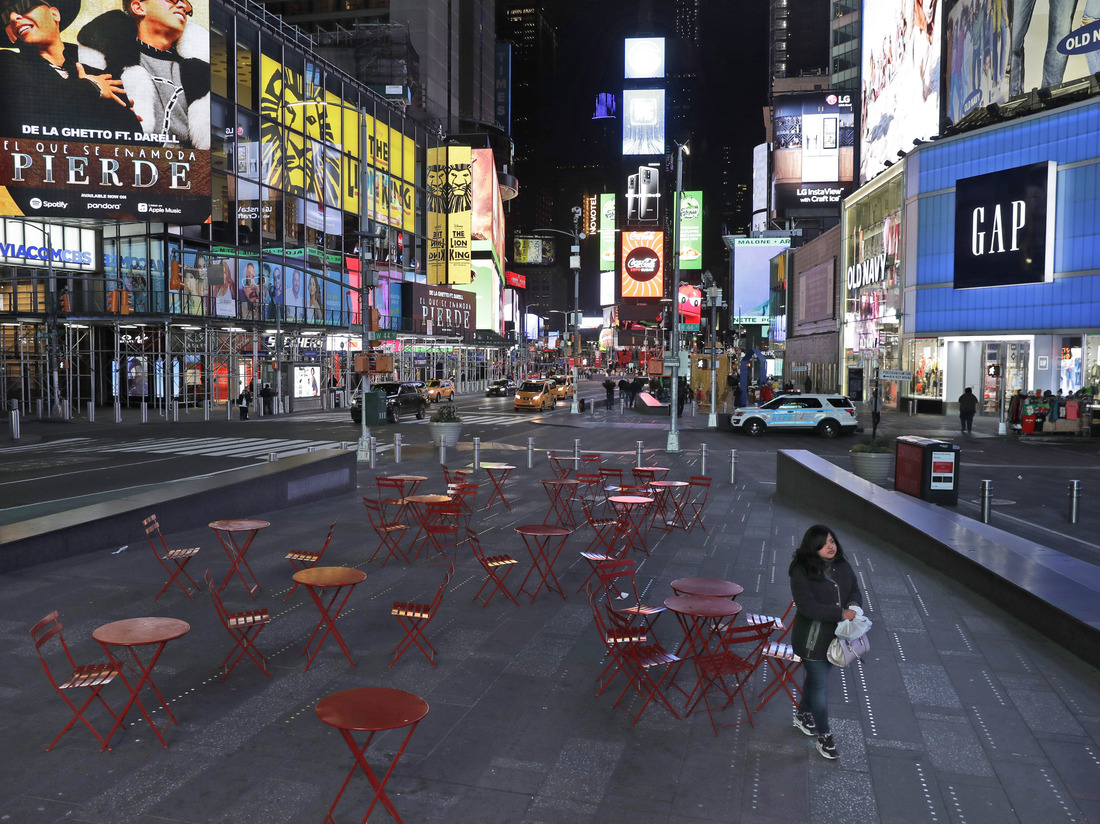 A woman walks through a nearly deserted Times Square in New York Monday, as the city adjusts to widespread closures and restrictions on public life because of the COVID-19 respiratory disease. 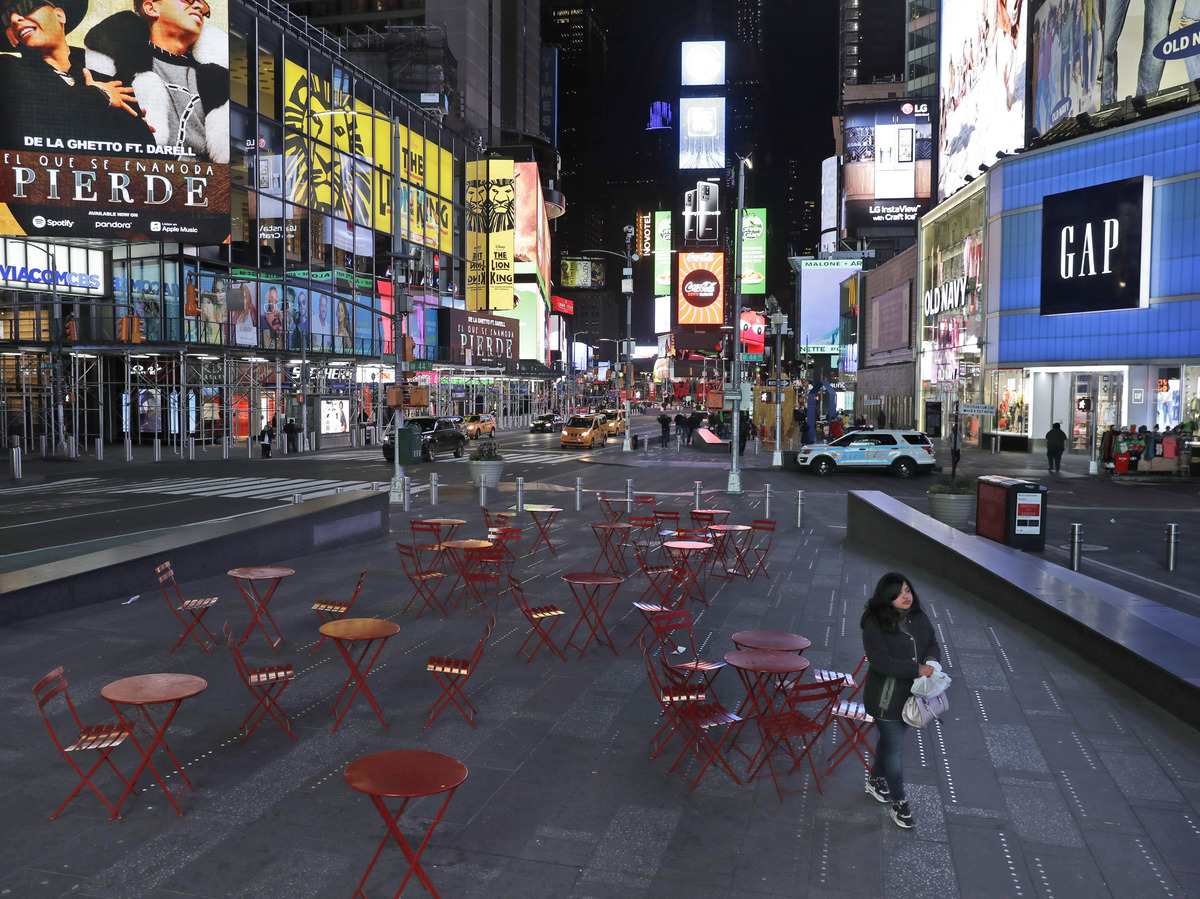 A woman walks through a nearly deserted Times Square in New York Monday, as the city adjusts to widespread closures and restrictions on public life because of the COVID-19 respiratory disease.

“As of today, 152 countries across the globe are affected by this new virus and over 7,000 people have lost their lives to it,” the World Health Organization’s regional director for Europe said Tuesday, describing the reach of a coronavirus that is disrupting lives in countries around the world.

“One-third of globally reported cases are in the European region,” the WHO’s Dr. Hans Henri P. Kluge said, reiterating his agency’s recent acknowledgement that the COVID-19 pandemic’s epicenter lies not in China, where this coronavirus was discovered in December, but in Europe.

“The lives of millions of people in our region are undergoing radical change. There is quite simply a new reality,” Kluge said in a briefing that was held in a U.N. building that has been nearly completely abandoned as workers stay home to practice social distancing. As Kluge spoke, a large bottle of hand sanitizer sat on the table in front of him.

The U.S. has more than 5,600 cases of the respiratory virus, as of midday Tuesday, and 94 people have died. New York is reporting some 1,700 cases, and Washington state is reporting nearly 1,000.

Uber and Lyft will no longer offer users the option of sharing or pooling rides, as the companies try to limit customers’ potential exposure to the coronavirus.

Both of the ride-hailing companies announced the temporary change on Tuesday.

“The health and safety of the Lyft community is our top priority, and we’re dedicated to doing what we can to slow the spread of COVID-19,” Lyft said via Twitter.

Lyft is halting the use of shared rides “across all markets.” Uber is suspending its “Pool” option in the U.S. and Canada, as well as in London and Paris.

“Uber and Lyft let passengers carpool, in exchange for cheaper fares,” NPR’s Shannon Bond reports from San Francisco. “These features are being put on hold as cities tell people to avoid nonessential travel and stay at least 6 feet away from each other. The companies are still operating their regular ride services, and UberEats is still offering food delivery.”

Bus service was canceled in Detroit on Tuesday, after many drivers refused to work out of concern for the coronavirus. Their complaints range from the capacity of buses to carry far more than the 10 people federal health experts currently recommend as a maximum for public gatherings to insufficient cleaning and sanitizing measures.

“Due to the driver shortage, there will be no DDOT bus service today,” the Detroit Department of Transportation announced.

The city says it’s working to address the drivers’ concerns.

Detroit Mayor Mike Duggan says that in addition to worries directly related to the COVID-19 pandemic, the drivers are also coping with the loss of many of their restroom break sites. Because of new restrictions at hospitals and restaurants, drivers who relied on those facilities at the end of their routes “found themselves unable to wash up and use restrooms as they came back,” Duggan said, according to local TV station Click On Detroit.

Michigan has reported 58 coronavirus cases, as of midday Tuesday ET.

Hospital in Massachusetts will be dedicated to treating COVID-19 patients

The Carney Hospital in Dorchester, Mass., is being remade into what is believed to be the first U.S. hospital devoted entirely to caring for COVID-19 patients, in a process that will begin on Tuesday.

“The 135-bed hospital on Dorchester Avenue will be converted immediately to enhance ‘patient isolation protocols’ and to marshal equipment such as ventilators and personal protective equipment on site,” member station WBUR reports.

Steward Health Care, which operates Carney Hospital, says the changes will also include the creation of negative pressure patient wards.

Steward, which is based in Dallas, “operates 35 hospitals in nine states and serves more than six million patients annually,” according to its website.

The company says its all-COVID-19 conversion has two main goals: to establish a model for care that’s dedicated to fighting the pandemic and to free up other medical facilities, including emergency rooms, to help people with other urgent conditions. Steward also says it’s working to set up more drive-through testing sites.

“While we have only treated 10 confirmed COVID-19 inpatients across our more than 7,000 beds nationwide to date, we are prepared for an influx,” the company says.

All but 1 U.S. states have reported a coronavirus case

As of late Monday, West Virginia was the only state that has not reported a coronavirus case. But the state was also among the last to gain the ability to test for the virus that causes COVID-19 — reflecting a wider problem in the U.S., where the rollout of a national testing system has been slowed by critical problems at the federal level.

Like many other states, West Virginia’s public lab is now being bolstered by the testing efforts of commercial laboratories and some hospitals.

The Union of European Football Associations is postponing its biggest tournament, Euro 2020, for 12 months because of the COVID-19 pandemic. The competition, which pits national teams against one another, was to have been played in June and July.

UEFA has 55 member countries. In announcing the decision to put off the Euro tourney, it said the decision to put off the popular tournament was made not only out of concern for the safety of fans of players, but also to avoid the strain its matches would put on public services and infrastructure. In recent days, Europe has emerged as the epicenter of the pandemic, with tens of thousands of new cases in the past week.

“We are at the helm of a sport that vast numbers of people live and breathe that has been laid low by this invisible and fast-moving opponent,” UEFA President Aleksander Čeferin said. “It is at times like these that the football community needs to show responsibility, unity, solidarity and altruism.”

Under the plan, UEFA playoffs and international friendly matches that had been scheduled for the end of this month will now be played in early June, the league says, although it acknowledged that the dates are subject to further scrutiny.

The Kentucky Derby had been scheduled to be run on May 2 – but the crown jewel of horse racing’s Triple Crown will instead be postponed until September, the Churchill Downs racetrack announced Tuesday.

The race traditionally takes place on the first Saturday of May; this year, it’ll happen on Sept. 5.

People who have already bought tickets for the race will automatically have those tickets transferred to the September date; anyone who’s unable to attend can seek a refund online, the racetrack said in a statement posted on its website.

Churchill Downs attracts more than 150,000 spectators for the race. But new federal guidelines recommend limiting public gatherings to a much smaller size – on Monday, the Trump administration advised Americans to avoid gathering in groups of 10 or more.

“The most recent developments have led us to make some very difficult, but we believe, necessary decisions and our hearts are with those who have been or continue to be affected by this pandemic,” Churchill Downs CEO Bill Carstanjen said of the decision.

Coronavirus: Know The Basics (And Wash Your Hands)

What is the coronavirus that causes COVID-19?

The name comes from the crownlike spikes the virus has on its surface — “corona” is Latin for “crown.” Common human coronaviruses cause mild to moderate upper respiratory symptoms, including the common cold, while more severe types can cause pneumonia and death.

The primary symptoms of COVID-19 are fever, cough and shortness of breath. Some people also experience fatigue, headaches and, less frequently, diarrhea. Cases can range from mild to moderate to severe. About 80 percent of cases so far seem to be mild, according to the World Health Organization.

To prevent the coronavirus from spreading, the Centers for Disease Control and Prevention recommends washing hands with soap and water for at least 20 seconds or using a hand sanitizer if a sink isn’t available. The WHO says people should wear face masks only if they’re sick or caring for someone who is.

What should I do if I think I’m sick?

If you think you’ve been exposed to COVID-19 and develop symptoms, call your doctor. Many state and local health departments have set up hotlines to answer questions, so that’s another good place to start. It’s important that you don’t expose others. Call your doctor before you go to their clinic so they can take necessary precautions.

How do I protect my home?

Wash your hands as soon as you walk through the door. Avoid sharing personal items such dishes, cups, utensils. Clean and disinfect “high-touch” surfaces like door handles and cellphones every day.

How does coronavirus spread?

The virus is thought to spread mainly between people who are in close proximity to one another: within about 6 feet. It spreads primarily through respiratory droplets that are spread when an infected person coughs or sneezes. Those droplets can land in the mouth or nose of someone nearby, and possibly infect them.

According to the CDC, it may be possible for a person to become infected by touching a surface or object that has the virus on it and then touching their own mouth, nose or possibly their eyes. But experts believe the virus spreads mostly through contact with other people.

How do I self-quarantine? And what does it mean?

The CDC has a guide for caring for yourself at home if you have a suspected or confirmed case of COVID-19.