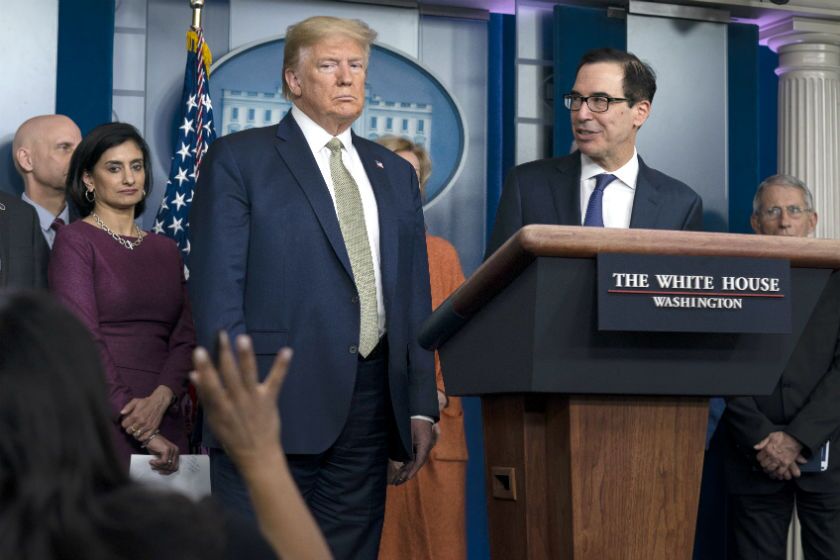 The coronavirus pandemic has confronted governments around the globe with the ultimate bad choice: Wreck your economy or lose millions of lives.

While some initially hesitated, leaders and legislators in the United States and worldwide increasingly have decided they have to accept the severe economic pain.

“Everything else will come back,” President Trump said Tuesday even as the economic downturn and global turmoil deepened. “Lives won’t come back.”

The costs in either direction are enormous.

U.S. officials know the worst-case scenarios could be extremely bad. The White House has based some of its new plans on a research model developed by doctors and scientists at Imperial College in London that suggests the coronavirus epidemic in the United States could kill at least 2.2 million Americans over the next few months if left uncontrolled.

But those efforts to slow the spread of the virus — mitigation, as public health officials call it — bring their own costs: throwing millions of people out of work for potentially a very long time.

The UCLA Anderson School of Business predicted Monday that the economic recession caused by the tightening government restrictions would cost 2 million jobs and raise the national unemployment rate to 5% over the next few months — up from 3.5% in February. Administration officials have warned Congress the unemployment rate could quickly soar into double digits.

The forecast projected that the U.S. economy would begin recovering late this year — possibly before the November election — if disruption caused by the virus ends by late summer.

That may be overly optimistic, however. The Imperial College study suggests that extreme measures of social distancing could be needed for more than a year to keep the pandemic from roaring back to life.

For policymakers, the decisions may be difficult, but “ultimately, it’s an easy choice,” said Jason Furman, who headed the Council of Economic Advisers in the Obama administration and currently teaches at Harvard’s Kennedy School of Government. “There’s no time to do careful cost-benefit analysis” of whether a particular restriction might cause more damage than it prevents.

Instead, government officials have to “follow a simple rule,” Furman said: “Anything the health people want to do to save lives they should do,” then “the economic people can do what they can to mitigate the damage.”

That’s the response the Trump administration — after considerable initial hesitation — has finally landed upon.

Trump, who as recently as Sunday said his administration had “tremendous control” over the pandemic and urged Americans to “just relax,” shifted course sharply on Monday. He embraced sweeping recommendations from health officials, urging Americans to avoid gatherings of more than 10 people, eating in restaurants or any nonessential travel for at least the next 15 days, repeating the guidance on Tuesday.

And the White House is calling for a massive economic stimulus package to try to fix the resulting economic harm.

In contrast to 2009, when President Obama pushed through an economic stimulus plan during the financial crisis, the Trump administration has met little resistance from Republicans in Congress for potential plans that could cost more than $1 trillion.

“This is an extraordinary moment that requires extraordinary responses,” said Sen. Kevin Cramer (R-N.D.). In a crisis like this, concern about deficits “tend to take a back seat,” he said.

“In different times, we’ll fix the deficit,” he said. “This is not the time to worry about it.”

Those different times may not arrive for quite a while.

Although tests have started, public health experts say it will take 12 to 18 months to develop an effective vaccine for the coronavirus. Until then, all they can do is try to lower the transmission rate by keeping people apart.

Viruses, by nature, spread until they run out of hosts who weren’t already infected or who developed immunity. Since the current strain of coronavirus is new, humans have no natural immunity to it — or the disease it causes, known as COVID-19.

Public health officials expect the virus will spread until about 80% of all Americans have caught it or until a vaccine comes on line, whichever comes first. At that point, enough people will be immune — what doctors refer to as herd immunity — that the spread will stop.

The vast majority of those who catch the virus won’t suffer much illness; many won’t even realize they’re ill. But with a U. S. population of 327 million, the small share who become seriously ill — roughly 5% are estimated to require hospitalization — adds up to millions of people.

If all of them require extreme care in a short period of time, which would happen without controls, hospitals would quickly be overwhelmed, as has happened in some parts of Italy. If that happens here, in addition to the death toll from the virus, numerous other patients would be unable to get proper care and might die.

Avoiding that scenario by slowing down the speed at which the virus spreads is the goal of current policies, a goal captured by the “flatten the curve” slogan and memes that have quickly sprung up online.

Crucially, however, flattening the curve doesn’t necessarily reduce the number of people who get sick: The goal is to spread the illness over time, reducing the impact on the healthcare system in any particular week or month but at the cost of making the epidemic last longer.

Instead of peaking in late spring or midsummer, the current social-distancing policies could result in a lower, but steady, flow of patients into hospitals for many more months.

Even that is still likely to crash the system in at least some places. Even the best-case mitigation scenario “would still result in an 8-fold higher peak demand on critical care beds” beyond what either the U.S. or Britain could handle, the Imperial College study noted.

That best-case scenario depends on keeping social-distancing policies — and the resulting economic damage — in place for many months, perhaps right up until an effective vaccine becomes available, the study warned. Otherwise, the virus will once again begin an uncontrolled spread.

Whether they can keep the new restrictions in place long enough and supply enough economic aid to cushion the blow is the challenge that government officials are now grappling with.

So far, the public has generally accepted the restrictions on social interaction and the closures of public and private facilities that governors, mayors and school boards and other authorities have begun ordering.

Some college students have objected to the abrupt closure of student residences and dining halls, a disruption that has fallen especially hard on low-income students who may not readily have other places to go or easy access to online studies. The new restrictions on bars, restaurants and other forms of entertainment have generated some grumbling on social media.

By and large, however, the desire to protect themselves and their loved ones from harm has caused people to accept measures they ordinarily would not tolerate.

But policymakers are keenly aware that public forbearance will not last forever. China succeeded in tamping down the spread of the virus, at least for now, by imposing extraordinary controls on its society — steps that a democracy probably would not accept.

It is “not at all certain that suppression will succeed long term,” the authors of the Imperial College study wrote. “No public health intervention with such disruptive effects on society has been previously attempted for such a long duration of time. How populations and societies will respond remains unclear.”