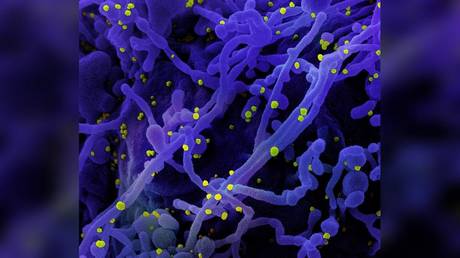 Coronavirus transforms the infected cells in a highly unusual manner, forcing them to grow long, protruding branches, which penetrate multiple healthy cells at once, a new study has found.

Scientists took a closer look at the effects of SARS-CoV-2 – the coronavirus that causes Covid-19 – through a powerful microscope at the National Institutes of Health laboratory in the US and the University of Freiburg in Germany.

The virus makes the infected cells sprout multi-pronged spaghetti-like ‘tentacles’ reaching out for several still-healthy cells nearby. The virus seems to use these branching structures, called filopodia, like syringes to prod other cells and inject them with a viral load, a study published in the journal Cell reports.

“There are long strings that poke holes in other cells and the virus passes through the tube from cell to cell,” Nevan Krogan, director of the Quantitative Biosciences Institute at University of California San Francisco and leader of an international group of scientists, told the Financial Times.

“Our hypothesis is that these speed up infection,” Krogan explained.

Also on rt.com
Ignoring MSM’s Covid-19 warnings made Americans more likely to die, studies say. Unless they went to a BLM protest, says another

According to scientists, the filopodia-growing method of infecting is highly unusual, because not many viruses do that. The ones that do, such as smallpox, don’t make the cells grow so many branches, and their structure is different from that of the novel coronavirus. Typically, tiny viral particles simply ‘dock’ onto larger cells and ‘hijack’ its functions.

The ‘tentacles’ show that at some point during its evolution the virus developed a new way of quickly traveling through the body, Krogan said.

It’s just so sinister that the virus uses other mechanisms to infect other cells before it kills the cell.

As of Saturday, more than 9.8 million people were infected with Covid-19 worldwide, and close to 495,000 had died, according to data compiled by Johns Hopkins University.