Bangkok, Thailand – When Thailand’s government started shutting down the country’s capital last week, tens of thousands of migrant labourers, who were suddenly out of work, scrambled to return home to Myanmar.

But now that the government has tightened up its borders, some migrants left behind have been forced to accept the consequences of their decision to remain in the capital, Bangkok.

For Ma Moe Moe, a migrant worker from Myanmar, returning home is not an option. The 44-year-labourer has lived in Thailand for years and has been working in factories for most of the time she has been in the country.

Last week, Ma Moe Moe and dozens of her coworkers were suddenly fired. The silk-garment factory, where they worked, shut down as most of its exports to China were halted as a result of economic slowdown brought about by the coronavirus pandemic.

Feeling disheartened, Ma Moe Moe told Al Jazeera that her former employer had little sympathy for their situation. And now, unable to go home and out of a job – she is stuck in limbo.

“Because of getting fired from the factory, I am worried about bills because there is only one income source from my husband,” she told Al Jazeera.

“Now that I have no job I feel depressed,” she said, explaining that her husband’s pay has also dropped because he can no longer work night shifts as a result of the Bangkok’s shutdown.

According to the International Organization for Migration (IOM), between four and five million migrant workers from neighbouring countries including Myanmar and Cambodia were living in Thailand when the lockdown was announced. Many others are undocumented.

Migrant workers are vulnerable during the migration process, says IOM, and even more so those who migrate irregularly, as they are at risk of exploitation because of their uncertain legal status.

‘No choice but to say’

Speaking to Al Jazeera from her studio apartment, Ma Moe Moe said she feared she might not be able to return to Thailand if she left and with a family to support, she and her husband are hunkering down.

And then there is the question of what would happen in Myanmar itself, which is also closing borders and imposing strict quarantines.

“No migrant workers from Myanmar I know are going back to Myanmar,” said Ye Htut, Ma Moe Moe’s husband.

“They will quarantine us for 14 days in Myanmar with poor facilities in either a school, hospital or temples. Only after that, will we be able to meet our families.”

Over the weekend, more than 40,000 people crossed over into Cambodia, while on the other side of the country thousands of others crowded the border at Mae Sot in the hope of returning to Myanmar.

But observers have raised concerns that migrants could carry the virus back to their homeland, which could risk intensifying outbreaks in less developed nations.

“Many of them come from rural communities in Myanmar, Cambodia and the Lao People’s Democratic Republic, which are relatively unprepared for monitoring, testing or treating COVID-19 cases,” he said.

Myanmar has so far reported only five confirmed cases of COVID-19, while Cambodia has listed 96. However, there has been very little testing in these nations and many believe the numbers are likely to be much higher.

Across the border in Myanmar, officials have voiced their concern about the virus, but insist the situation is under control.

It is unclear what measures Myanmar is taking to repatriate its citizens but the authorities have set up quarantine zones and are reportedly instructing those arriving to self-quarantine for 14 days.

“We cannot confirm how many people we have prepared for, because the number keeps changing as we receive offers of help from different stakeholders for quarantine facilities,” Daw Khin Khin Gyi, director of Myanmar’s Central Contagious Disease Prevention and Eradication Sub-Department in the Ministry of Health and Sports (MOHS), told The Irrawaddy, a news website.

For its part, Cambodia has encouraged its migrant workers not to return, but the appeal did little to prevent thousands from heading to the border as Bangkok was closed down.

Temperatures were being taken at the border monitored of those entering Cambodia, but of the tens of thousands of Cambodian migrants returning, only 35 were tested for the virus, according to officials.

Those who decided to stay behind in Thailand, face a different set of challenges as they grapple with the economic uncertainty brought about by pandemic.

“Migrant workers are now unable to work as they planned,” Suthasinee said. “Their lives are made more difficult now and are living in fear.”

While Bangkok is reliant on migrant workers – from construction to hospitality, factories and housekeeping, the Thai government has offered little support. 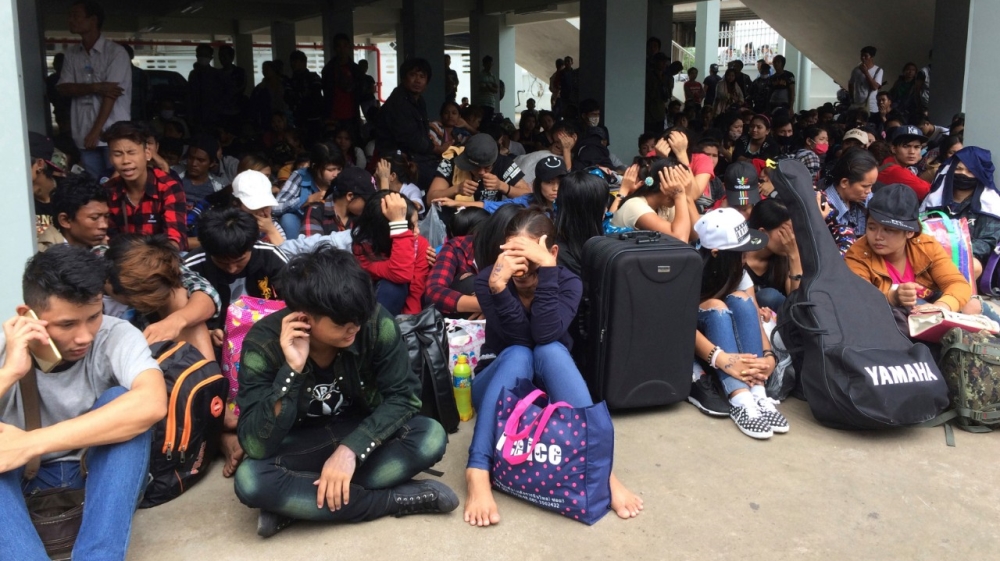 Suthasinee said the Thai government is only offering limited assistance, including temporary visa extensions, and migrants can apply for welfare through a “jobless policy.” But she said it is rarely given to migrant workers.

The lockdown and a sweeping state of emergency are expected to continue until April 30. Among the measures, Thailand’s government included a ban on public assembly and a call to discourage inter-provincial travel.

Some are concerned a curfew will be imposed

Ye Htut, the labourer and husband of Ma Moe Moe said many migrants are now worried that the new state of emergency could make things even more difficult.

“Because of the [state of emergency] we don’t get to work overtime, which brought good income for us before. Some factories are shut down, some downsized and fired employees like what happened to my wife,” he explained.

For Mo Mae Mae, the only thing on her mind is how she is going to support her two children.

She says she cannot just apply for other jobs, as her work permit only allows her to be employed in a factory. She is now filing for compensation along with the other workers who were let go from the garment factory.

“We’re angry and upset because the employer is ignoring everything. He’s not willing to pay compensation,” she said. “We told him that we have nothing now.”