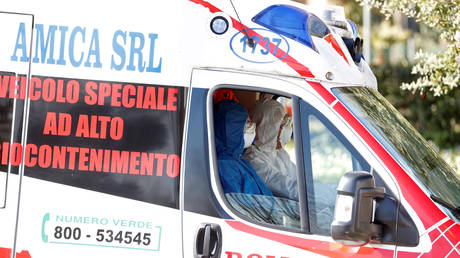 As the death toll from coronavirus surges in Italy, a doctor working on the frontlines in Milan explained to RT how the epidemic caught his country completely off-guard, despite its robust healthcare system.

Italy has seen more than 30,000 infections and 2,500 deaths from Covid-19, making it the worst-hit country after China, where the virus is believed to have originated. The massive death toll in Italy alone has pushed fatalities in Europe past those in Asia – a sobering benchmark for the West as it rushes to stop the spread of the disease.

The health crisis has been particularly bad in Italy because the virus was able to rapidly spread in the north of the country for several weeks before it was detected, Dr. Massimo Galli, head of the infectious disease unit at  Sacco Hospital in Milan, told RT. He said that medical officials believe that the disease was carried to Italy by someone who became infected in Munich, Germany. Several individuals in the Bavarian city caught the illness after coming into contact with a carrier from Shanghai, China.

“We are sure that the virus in Italy is extremely related to the virus isolated in Munich,”  Galli said.

He stressed that Lombardy and other parts of Italy struggling to cope with the virus have health infrastructure which meets “a high European standard” – but that it was simply “impossible” to be properly prepared for an epidemic of this size.

For everybody in the world, this is a very large epidemic… it was able to overwhelm rapidly the possibilities of the current [healthcare] systems.

The death toll in Italy can be attributed at least in part to the large number of cases that the country experienced in which there were no serious symptoms. Testing was reserved exclusively for those showing severe signs of the illness, Galli said, and many people who caught the virus but didn’t exhibit clear indicators didn’t know until it was too late.

With the battle against the disease far from over, the Italian doctor praised his “heroic” colleagues for working nearly non-stop.

“Everyone is working without rest, with just a few hours between shifts,” Galli said.