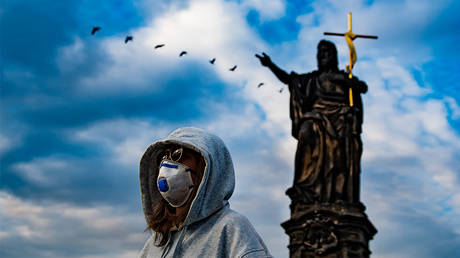 According to the Johns Hopkins University Tracker, an academic web-based map, the threshold was passed on Wednesday.

At least 7,954 people have died from Covid-19 globally, the university also reports, while the World Health Organization (WHO) lists the figure at 7,529, and says the virus has affected at least 150 countries now.

As the virus keeps gaining ground across the globe, Europe has suffered more deaths from Covid-19 than the whole of Asia, AFP reports.

The coronavirus, which had its initial epicentre in Hubei province, China late last year, has been largely contained there after harsh measures were taken by Beijing to stop the spread.

Meanwhile, Europe has recently been declared the epicenter of the epidemic by the WHO, with Italy, Spain, and Germany among the most affected nations.

Italy alone now has over 2,500 recorded deaths from coronavirus, while Spain says over 550 of its citizens have died.

The pandemic is also taking a toll on people across the Atlantic, with the US reporting the virus has spread to all 50 states, with the total number of confirmed cases reaching over 6,000 with dozens of deaths.