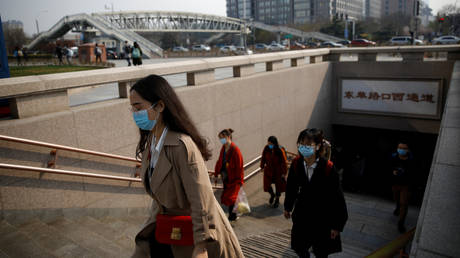 No new cases of Covid-19 have been recorded in China’s central Hubei Province and its capital Wuhan, where the outbreak originally began, the National Health Commission (NHC) told reporters during a press briefing on Monday.

Overall, 81,470 people have tested positive for the coronavirus in mainland China since the beginning of the outbreak, and 75,770 of them have subsequently recovered and were discharged from the hospitals, a health official said. This makes the recovery rate in the country close to 93 percent.

Chinese doctors have recorded 31 new cases and four deaths in the past 24 hours, with all but one of the new cases are linked to people arriving from overseas.

Imported cases of Covid-19 are now the government’s main concern since NHC spokesperson Mi Feng said on Saturday that the domestic transmission of the disease had “basically been stopped.”

There are currently 723 imported cases of Covid-19 in China after Beijing banned foreigners from visiting the country earlier this week.

A strict lockdown and the deployment of tens of thousands of doctors to Wuhan has helped to bring down the amount of new cases there to near zero in recent weeks. Beijing has begun lifting quarantine restrictions in Hubei, including the resumption of rail and air travel, with Wuhan expected to be reopened for outside travel on April 8.