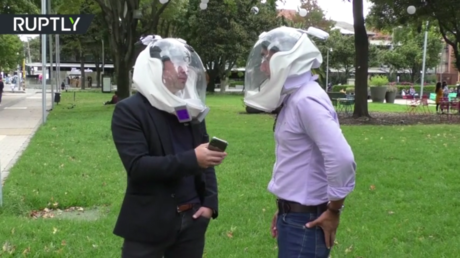 Forget about face masks, engineers from Colombia have designed a special helmet similar to those used by astronauts to work as a protection bubble against the coronavirus infection.

The futuristic headgear is intended for use by people who are most vulnerable and who “really live their daily lives with a lot of risk” of getting sick, aeronautical engineer, Andres Felipe Giraldo, told RT’s Ruptly video agency.

Yet, according to the helmet’s co-creator, Ricardo Andres Conde, it will also fit “anyone who wants to protect him or herself” from the disease, which has already infected around 296,000 and killed over 10,000 people in Colombia.

Though with all the recent global controversy over mask-wearing, it’s unclear how many regular people would be up for walking around wearing a helmet that wouldn’t look out of place on a space suit.

The final prototype that the duo showed the cameras was the result of a lengthy design process, with no less than 84 earlier versions of the headwear being rejected, they said.

The helmet consists of a plastic structure, an electrical fitting, filters and a battery to allow for circulation of clean, uncontaminated air inside. While it may look big and bulky, it weighs just 650 grams (22.9 oz) and allows the user to talk on the phone without any complications as the video proves.

The commercial value of the potentially life-saving gadget is estimated at 400,000 Colombian pesos, which is less than $130.