Kuala Lumpur, Malaysia – The coronavirus pandemic is expected to get worse before it gets better, a global health expert warned, stressing the best way individuals can limit the spread is to strictly observe social distancing – the practice of avoiding close contact with other people.

Swee Kheng Khor, a doctor who studies global health policies at the University of Oxford, made the assessment even as some of the world’s political leaders continue to defy his advice while imposing the same restrictions in their countries.

“At the moment, vaccines are at least 12 to 18 months away, and there is no cure for coronavirus,” said Dr Khor, who has extensive experience in disaster relief.

“Treatment is only supportive and may require intensive care in a minority of patients. Therefore, without a vaccine or effective treatment, social distancing to prevent coronavirus is the best way to fight it.”

As part of the health guidelines on social distancing, mass gatherings – from rallies and concerts to religious events – are to be avoided, and individuals are advised to maintain at least one metre (three feet) distance from others.

But even if the science behind social distancing is strong, governments “find it difficult to impose” the practice, because it goes against the “instinct of humans” and it carries with it political and economic costs, noted Dr Khor, who is also a senior fellow on health policies at the University of Malaya in Kuala Lumpur.

The disease, which originated in China, has continued to spread around the world, with infections confirmed in at least 165 countries. As of Thursday, the death toll is nearing 9,000, while infections were about 220,000. Some 84,000 victims have recovered, mostly in China.

The health emergency has left many political leaders grappling for the most effective response, while others remain dismissive of the global threat. 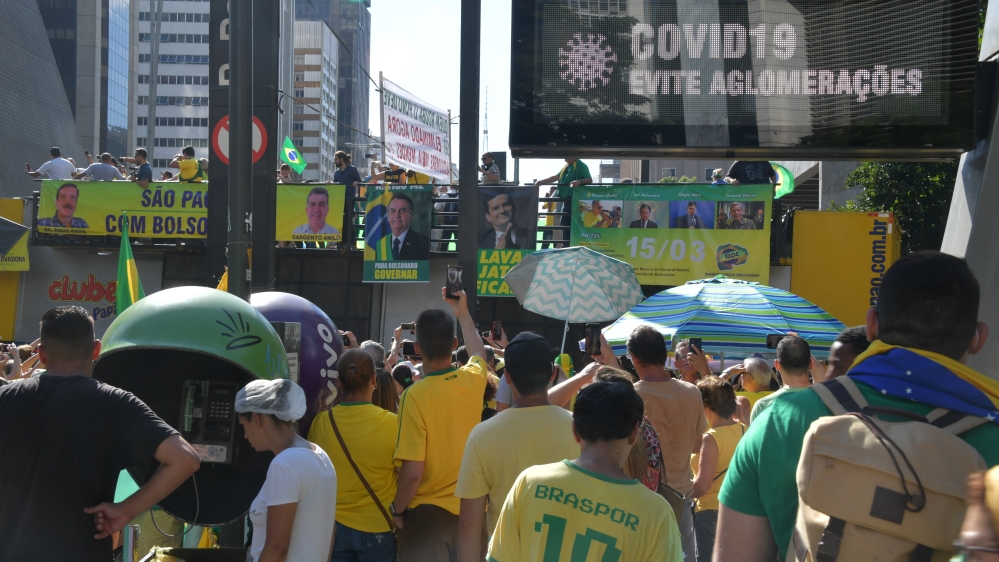 On Sunday, March 15, outrage erupted in Brazil after President Jair Bolsonaro bolted out of his own reported quarantine to greet supporters, shaking hands and taking photos with them in the capital, Brasilia. This, despite earlier warnings that he might have been exposed to the coronavirus through his communications secretary, Fabio Wajngarten, who had tested positive.

Bolsonaro, who claimed to have tested negative for the virus, earlier encouraged supporters to take to the streets against the country’s Congress and Supreme Court – ignoring warnings from health authorities about large gatherings and recommendations on social distancing. He called the coronavirus threat a “fantasy”.

He also downplayed the revelation on Wajngarten’s health condition, while his son fiercely pushed back against reports from Fox News and several Brazilian media that the president himself was infected.

Wajngarten accompanied Bolsonaro during his meeting with US President Donald Trump in Florida in the first week of March. At least 14 people from Bolsonaro’s US entourage later tested positive for the coronavirus, according to reports.

On Friday, March 13, Trump brushed off speculation about the risk of being exposed to the disease, after his meeting with Bolsonaro and other Brazilian officials. 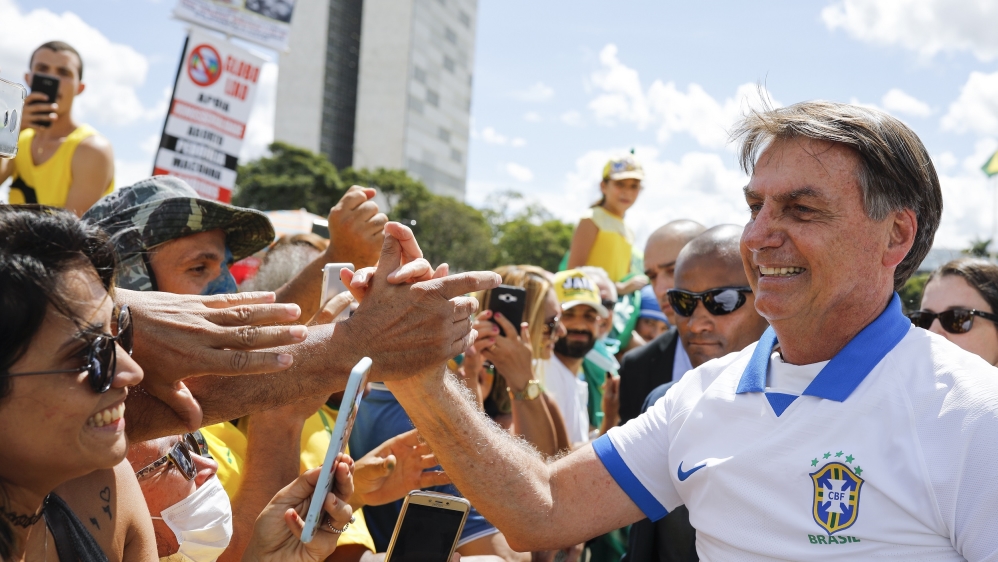 As he shook hands with outgoing Irish Prime Minister Leo Varadkar during their meeting at the White House, Trump said he was “not concerned” after meeting Wajngarten, who in one photo was shown standing next to the American president and vice president.

Later that same day at the Rose Garden, Trump addressed the country and declared a national emergency to combat the virus – a reversal from earlier statements in which he said it will “miraculously” go away “when it gets a little warmer” in April.

After his speech, the US president was seen patting the back of Vice President Mike Pence and brushing his right hand with the hand of Dr Anthony Fauci, the director of the National Institute of Allergy and Infectious Diseases, as both reached for the microphone set up for the news conference.

The next day, as cases of infections and deaths continued to climb in the US, Trump wrote on social media, “SOCIAL DISTANCING!” 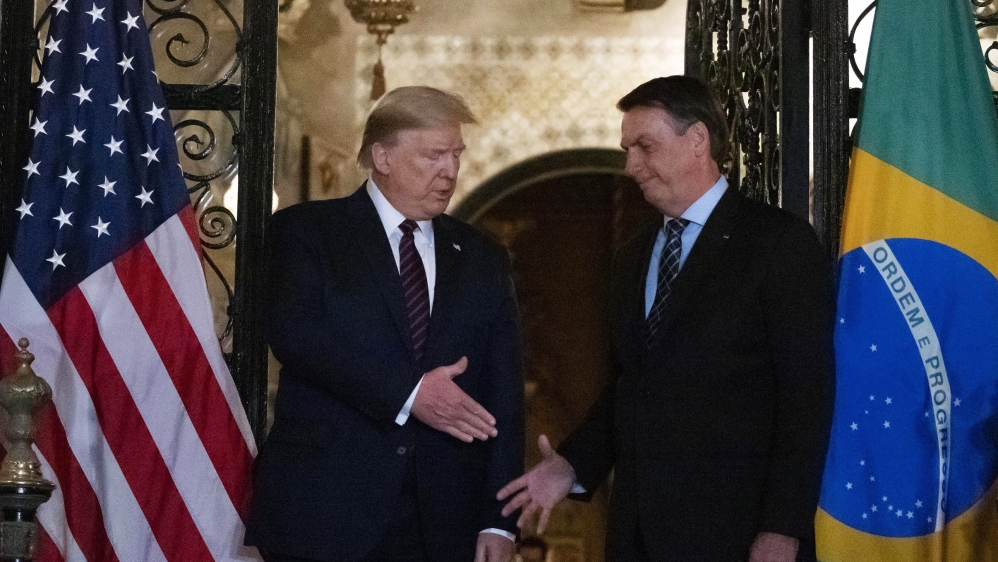 Elsewhere, in Iran, cases of infections have reached more than 18,000 while the death toll hit more than 1,284 on Thursday – leaving the country struggling to contain the heavy death toll.

That has not stopped President Hassan Rouhani from presiding over public gatherings, even as he ordered the suspension of Friday prayers at mosques across the country, as well as other large gatherings during the Persian New Year beginning on Friday.

On Wednesday, Rouhani was seen standing next to several officials as he unveiled a commemorative stamp honouring healthcare workers fighting the coronavirus – an event panned on social media. At the event, he was shown with bare hands carrying an oversized seal handed to him by an aide. 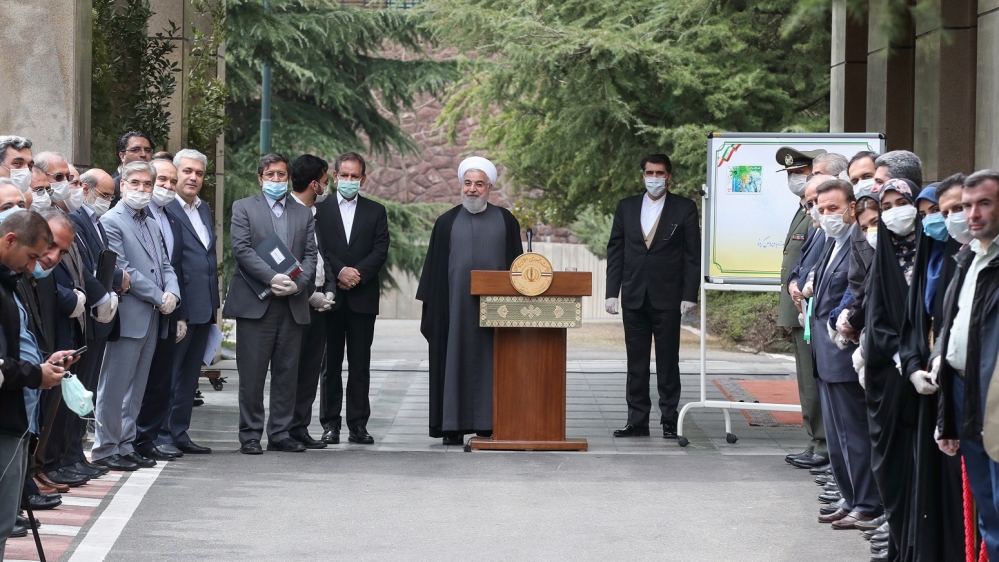 Rouhani, centre, is joined by his cabinet officials, including Vice President Eshaq Jahangiri (to Rouhani’s immediate right) following their last regular meeting before the Persian New Year on Friday [Iranian Presidency via AFP]

Amid reports of several high-ranking officials in his cabinet being infected, Rouhani also conducted his regular cabinet meeting on Wednesday. Several of the officials were seen wearing masks and gloves, unlike Rouhani.

‘I want an embrace’

But even as Duterte ordered strict compliance on social distancing, his former aide and closest ally, Senator Bong Go went ahead with a relief distribution event in Mindanao, that attracted more than 100 people, many victims of a recent fire that destroyed several homes.

In the photos posted by the state-owned Philippine Information Agency, Go was seen addressing a crowd, who stood shoulder-to-shoulder. 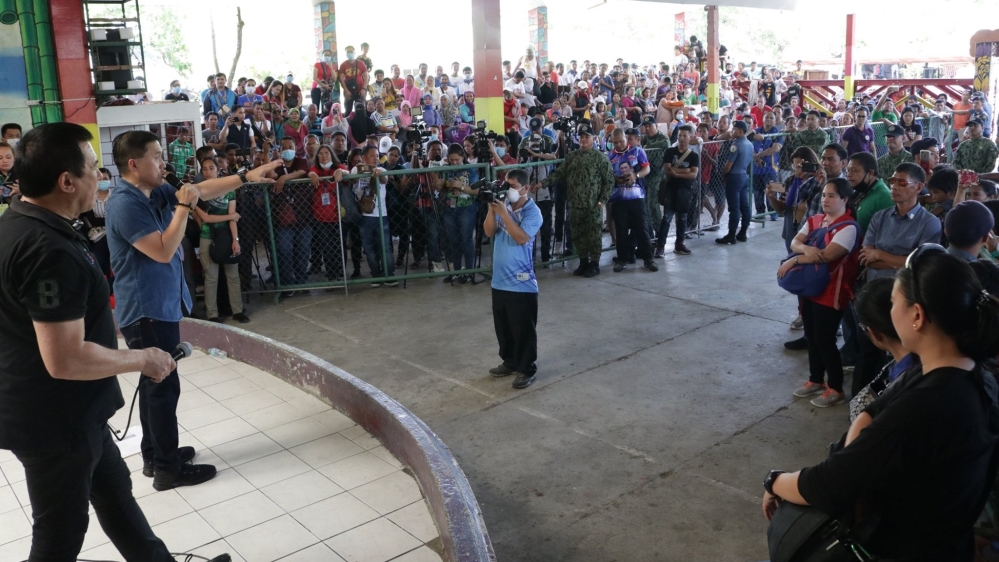 Philippine Senator Bong Go addresses a crowd at a relief distribution event in Mindanao two days after President Duterte issued an order to help contain the spread of the coronavirus, including the strict observance of social distancing [Philippine Information Agency]

In response to criticism directed at him, Go wrote on social media, “in this time of crisis, if you cannot help, just quarantine your mouth”, without answering questions about his alleged violations of the social distancing rules.

In early March, Duterte also said he will continue to shake the hands of his supporters, rejecting the “no-touch” policy being implemented by his security personnel to protect him from possible infection.

“I want an embrace, why only a handshake? That protocol is foolishness. I will shake hands. If the Lord summons me now, that it is time to go, then I will go. I am done. I have been the president, the highest position a person can ever attain. And my children, they are fine now,” Duterte said.

As of Thursday, coronavirus infections in the Philippines have reached 217, with at least 17 deaths, according to the Department of Health. Among those who were infected was Senator Miguel Zubiri, another ally of Duterte.

Health Secretary Francisco Duque III has also been placed in quarantine after he was exposed to another senior health official, who contracted the virus. On Tuesday, Duque was seen sitting to the left of Duterte during a meeting in the presidential palace in Manila. Senator Go was seated to Duterte’s right.

JC Punongbayan, a Filipino columnist and teaching fellow at the University of the Philippines School of Economics, said Duterte’s response to the pandemic has been “delayed and inadequate”, putting into question the effectiveness of the current “community quarantine”.

“Experts have shown that quarantines and lockdowns are inferior to well-enforced social distancing. It seems the Duterte government has not realised that yet. True enough, many Filipinos fled Metro Manila before the lockdown was enforced, and this could have accelerated the spread of COVID-19 outside of Metro Manila,” Punongbayan told Al Jazeera.

For his part, Dr Roberto Bruzzone, visiting professor at the University of Hong Kong’s School of Public Health, said while it is important for people to strictly observe social distancing, it is also clear that societies “cannot function completely in isolation”.

“This is what we need to take into consideration that we cannot completely block life by having everybody staying at home and not going out,” Dr Bruzzone told Al Jazeera.

In the case of Italy, where a complete nationwide lockdown was ordered last week, Bruzzone, who studied medicine at Rome’s La Sapienza University, said it is “to early” to assess the effectiveness of the “drastic measures of limitations to individual freedom of movement”.

“We need to believe that these were effective, because by decreasing the chances of being in contact with other people, it is likely to be effective.”

As of Thursday, Italy registered 3,405 deaths compared with 3,249 deaths in China. Italy also has more than 41,000 cases of infection.

‘Give way to scientists and doctors’

As countries struggle to stave off the growing number of deaths and infections, Dr Khor of Oxford University said aside from social distancing, countries should also implement adequate tests and aggressive contact tracing – the process of identifying anyone, who may have come in contact with an infected person. 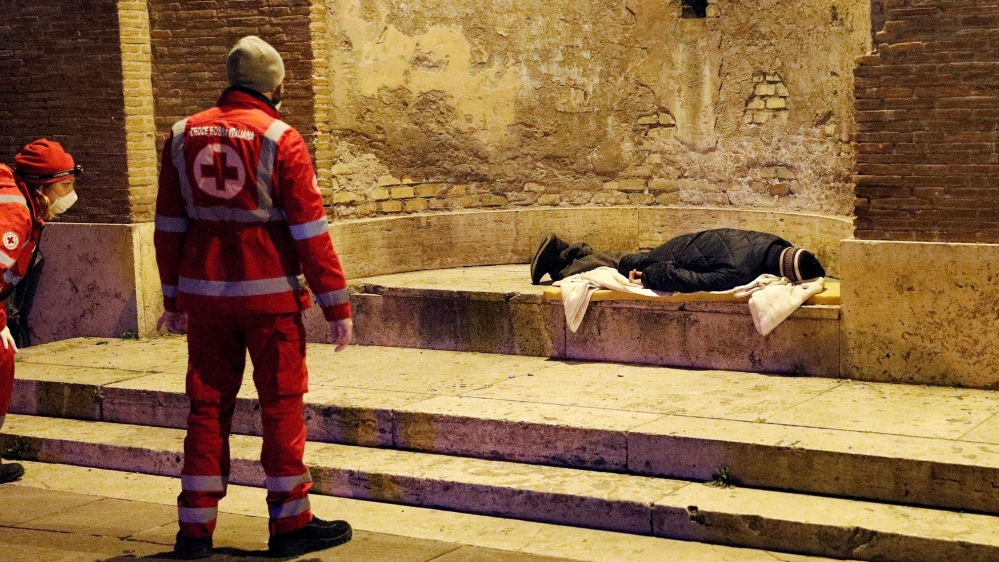 Red Cross workers check on a homeless person in Rome on Tuesday; Italy is on track to surpass China in the number of coronavirus-related deaths by March 19 [Guglielmo Mangiapane/Reuters]

Taken together, the three measures can help achieve the two objectives during an outbreak: the reduction of the total number of cases and the distribution of cases over a longer period of time, also known as flattening the curve, he added.

Dr Khor noted that the coronavirus outbreak is happening at a time of “declining trust” in governments around the world.

He suggested that political leaders should give way to scientist and doctors to help solve the crisis.

“Decisions during outbreaks are far too important to be left to politicians alone. Scientists and doctors deserve a bigger and permanent seat at the decision-making table, during times of outbreaks.”