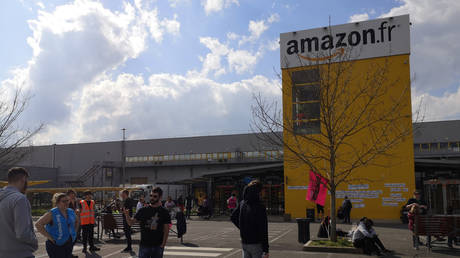 French Finance Minister Bruno Le Maire said Amazon’s refusal to pay wages of staff who walk out over coronavirus fears is “unacceptable” as the country is considering nationalization of bigger companies at risk.

“These pressures are unacceptable, we’ll let Amazon know,” Le Maire said after several hundred workers protested the company’s policy on Wednesday. The e-commerce giant refused to pay workers who walked out or stayed at home in self-isolation over coronavirus fears.

Le Maire said Thursday that he would soon present a variety of plans to President Emmanuel Macron to assist the country’s biggest companies, such as BNP Paribas, Renault, Air France KLM, through the coronavirus crisis, some of which might include nationalization.

“We have several options on the table for all of the major industrial companies which could face major threats on the market, it could be us raising our stake in their capital… or it could be nationalizations,” Le Maire said.

“I won’t hesitate to use all means available to protect big French companies.”

France’s financial markets authority banned short selling on Tuesday to protect 92 stocks, and is considering extending the policy for a month. Meanwhile, the government is preparing a €45-billion ($46bn) stimulus package to help companies stay afloat through the impending storm, the majority of which will cover tax and payroll charge deferrals.

The government has also pledged up to €300 billion in new loans to companies in order to buffer the banks and reduce their overall exposure to losses which would have a dramatic knock-on effect on the wider economy.

Paris is predicting a one-percent contraction of GDP in 2020 alone as part of a grim overall forecast for the coming months and years as a result of the global coronavirus crisis.