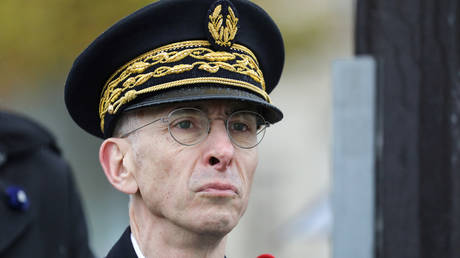 With France reeling from the Covid-19 pandemic, the head of the Paris police force has been rebuked for suggesting that the worst-affected patients have only themselves to blame for their illness.

France has been hit especially hard by the coronavirus outbreak. The country has confirmed nearly 60,000 cases as of Friday, and more than 5,000 people have died. With a strict nationwide lockdown in force and healthcare workers struggling to allocate hospital beds, more than 6,000 patients in France are in critical condition.

But Paris’ police chief, Didier Lallement, expressed little sympathy for the afflicted. “Those who are found in intensive care today are those who, at the beginning of confinement, did not respect it,” he told BFMTV on Friday morning, claiming the correlation is a “very simple” one.

Insulting the sick didn’t play well with the French public, some of whom called for Lallement’s resignation. Right-wing politician Marine Le Pen said the chief’s words were “utterly stupid,” while leftist lawmaker Jean-Luc Melenchon called Lallement the “grimacing face of the regime.”

“Not only is this completely false, but it is truly an insult to our patients,” one hospital director told BFMTV. “On behalf of the caregivers, on behalf of all the patients, the chief must resign.”

Even Interior Minister Christophe Castaner – a supporter of Lallement’s tough policing policies during the ‘Yellow Vests’ protests – stepped in to downplay the chief’s words. “This statement by the prefect of police is inaccurate,” he said, adding that obeying the lockdown is nevertheless important.

Lallement himself apologized hours later, with a press release from his department saying that he “regrets the comments he made this morning,” and that “his intention was not to establish a direct link between non-compliance with health instructions and the presence of patients in intensive care.”

Working as Paris’ top cop since last April, Lallement has deployed police to the streets of the French capital almost every weekend since he took charge of the department. His often heavy-handed crackdown on anti-government ‘Yellow Vests’ protesters and pension reform opponents has earned him intense criticism, particularly for his force’s use of mutilating ‘sub-lethal’ ammunition on demonstrators.

It is perhaps unsurprising, then, that Lallement would frame France’s Covid-19 outbreak as a criminal issue, above a public health one.

Thousands of fines have been dished out to French residents found outside without their mandatory letters of explanation, and the chief warned anybody thinking of departing the city this weekend that his officers would be on duty to stop their “stupid plans.”

“We will be extremely severe,” Lallement told BFMTV.