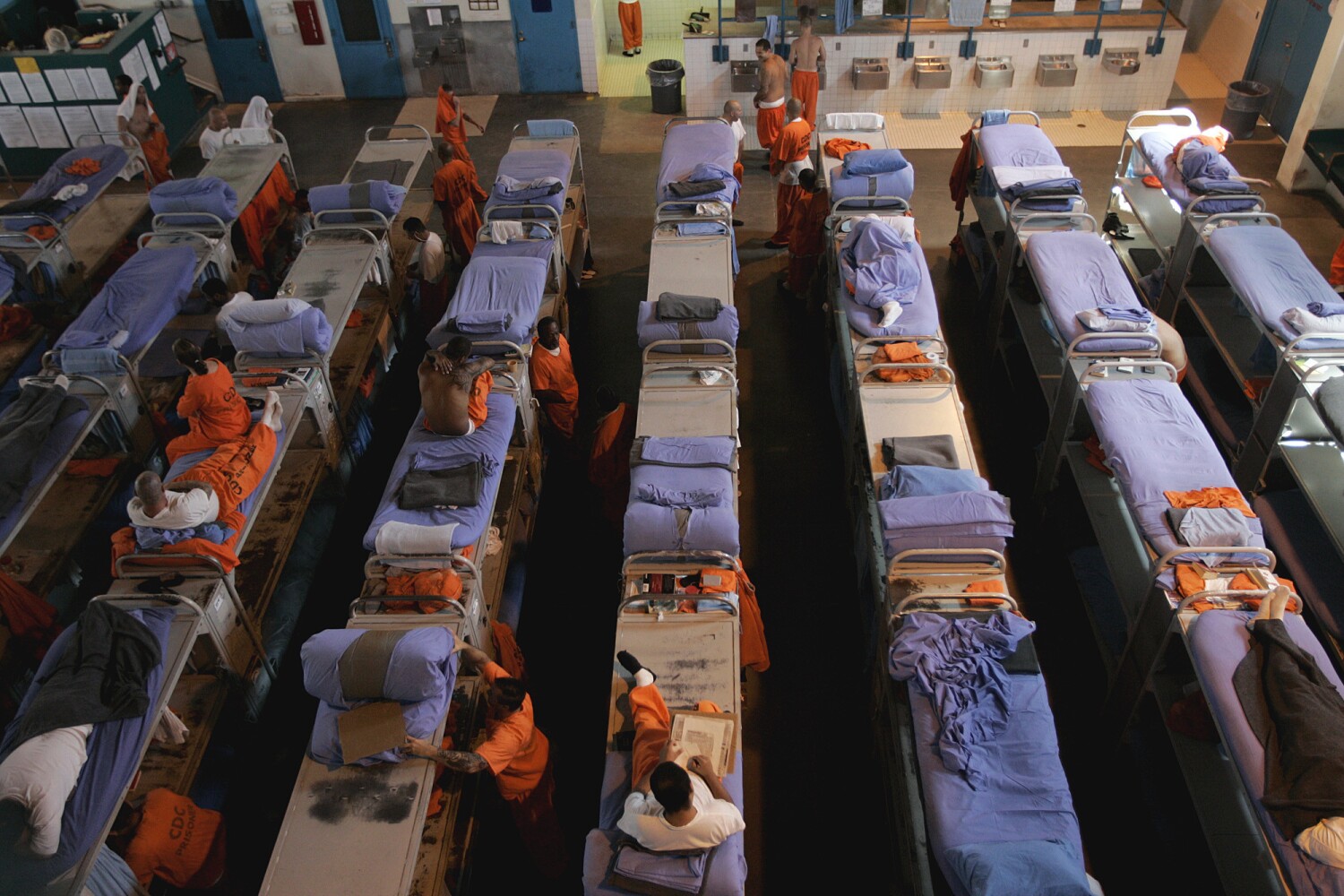 They live in overcrowded facilities, sometimes jammed into tiny spaces in groups of three. Sanitary conditions can be an afterthought. Social distancing is rarely an option.

For the nearly 2.3 million people held in prisons and jails nationwide and the guards who work inside, a scramble is underway to prevent the coronavirus from seeping within.

In letters to the U.S. Department of Justice and local leaders, the ACLU has called for the immediate release of inmates whose sentences would be completed within the next two years and who fall within a category deemed as particularly vulnerable: over the age 65 or having an underlying condition. In the letter dated March 18, the American Civil Liberties Union also asked local law enforcement to temporarily stop arresting people for minor offenses and instead issue citations. Those in jail on low-level nonviolent offenses should be released, according to the letter.

“The urgency of deliberate and thoughtful action,” the letter reads, “cannot be overstated.”

Even before President Trump declared a national emergency, activists across the U.S. — which has the highest incarceration rate in the world — had begun pleading with officials to take preventative measures to protect inmates.

There are more than 1,700 state prisons, 100 federal prisons and thousands of jails nationwide, and, according to a recent report by the New York-based Brennan Center for Justice, nearly 40% of inmates are incarcerated for nonviolent offenses, mostly concerning drugs. Releasing them, the report found, would save $20 billion a year.

Now more than ever, activists say, prison overcrowding is a life-or-death issue, in particular for black and Latino men, who are incarcerated at disproportionately high rates in many states.

The Centers for Disease Control and Prevention has implored Americans to wash their hands more often and to keep six feet away from others to help limit the spread of the virus. In prisons, those protocols are sometimes impossible to achieve.

“We are past the crisis point,” said Jennifer Soble, executive director of the Illinois Prison Project, a group that works on criminal justice reform. “Social distancing in prison is impossible.”

Once someone carries the virus into a prison — and it’s a matter of when, not if, activists warn — it will spread rapidly. Hundreds if not thousands of elderly and sick inmates could develop serious or fatal cases of COVID-19, Soble said Thursday, and they would all at the very least require hospital care.

California and several other states have decided to limit visitors from entering prisons for at least a month and make hand sanitizer and soap available to inmates as well as staffers. In interviews Thursday, advocates for inmates at Stateville Correctional Center in Joliet, Ill., a suburb of Chicago, said their clients still had not yet received any of those supplies.

Prison employees are getting the supplies, the advocates said, but some guards have reportedly continued to come to work with a fever, and several inmates say some of those incarcerated have shown symptoms of the coronavirus.

“It’s going to get bad … really bad,” said an advocate, who asked to remain anonymous because of a concern that prison officials would cut off contact with inmates. “We have to wake up to what could happen inside these prisons.”

A request for comment from the Illinois Department of Corrections was not immediately returned.

Earlier this week, the Southern Poverty Law Center and a coalition of civil rights groups signed a joint letter to prison officials in Southern states including Alabama, Florida and Louisiana calling for enhanced inmates safety.

Those in prison are highly vulnerable, the letter said, not only because they’re housed in tight quarters, but also because their well-being and level of knowledge is often at the whim of the warden.

“They have little ability to learn about ongoing public health crises,” the letter reads, “or to take necessary preventative measures if they do manage to learn of them.”

Some local officials are heeding the warnings of inmate rights groups.

In Los Angeles, the Sheriff’s Department is releasing inmates close to the end of their sentences from its jails and cutting down on how many people it books into custody. This week, the county’s jail population dropped by nearly 600.

Nearly 2,500 miles away in Charlotte, N.C., roughly 100 inmates have been released from the Mecklenburg County Jail, officials said.

And in New York, Brooklyn Dist. Atty. Eric Gonzalez announced that low-level offenses that don’t jeopardize public safety will not be prosecuted amid the coronavirus outbreak.

New York Mayor Bill de Blasio said his office was working with the city’s district attorneys on a plan to possibly release some inmates who are over 50 and have underlying health issues. Officials in New York announced more than 1,700 new cases of the coronavirus on Thursday morning.

On Thursday, local news media reported that an inmate on Rikers Island in New York — which houses 7,000 people most days — had contracted the coronavirus. Earlier in the week, an employee at Sing Sing Correctional Facility in Upstate New York also tested positive, prison officials confirmed.

Meghan A. Novisky, a professor of criminology at Cleveland State University who has written about mass incarceration, said she fears prisons could become “hot spots” for the virus.

“Jails and prisons will struggle to address this crisis not only because of lack of medical supplies, but because it is likely correctional staff shortages will occur as staff begin to get sick,” she said. “To be clear, incarcerated persons are an at-risk health group as is — they tend to have worse health than the general population, and they are prone to infectious diseases.”

While sanitary supplies are limited in many cash-strapped prison systems and visitations have been cut off, several states have given inmates increased phone rights.

Sue Gillmore, a Rexburg, Idaho, resident whose son is an inmate in Douglas Prison, in Arizona’s Cochise County near the border with Mexico, said he can now make two free 15-minute calls to her per week. Her son, Daniel, who has eight more years to serve of a 12-year sentence on drug and weapon possession, used to be allowed one such call.

In addition to suspending visits, the state’s corrections system has also made soap free and put an end to $4 payments prisoners with flu and cold symptoms usually are required to make.

Daniel “is trying to deal with the issues, to stay away from people,” said Sue, 63. “I have not heard of the coronavirus in the prison right now. But if it happened, that would be a huge concern.”